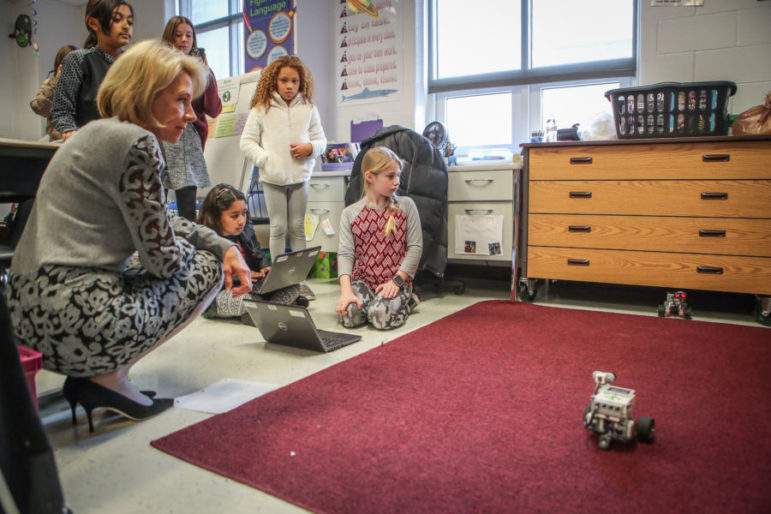 “Washington, D.C., does not have all the answers,” DeVos said at the Department of Education’s K-12 focused “Rethink Schools Summit.” “But government can be good at bringing people together to highlight their creative thinking and new approaches.”

It’s a familiar tactic for DeVos, who has been largely stymied in pushing school choice policies but has repeatedly put the spotlight on specific schools she finds innovative. Charter and private schools were well represented at the Tuesday meeting, which also included a number of district leaders and an array of others, including arts-education, homeschooling, and community-schools advocates.

Here are a few takeaways from the event:

There appeared to be broad agreement in the room on several general notions: Teachers are important, technology needs to be used, but used wisely, and schools must change to prepare students for a changing world.

“Technology is the not the answer,” said Tom Rooney, the superintendent of Lindsay Unified School District in California that has embraced a tech-infused approach that he calls customized learning. It’s “about using technology in transformational ways to accelerate the learning.”

Rooney pointed to an effort to expand wireless Internet throughout the community, and to schools that group students by performance levels, rather than age or grade.

But DeVos’s request for participants to describe “where impediments at any level of government are preventing you from achieving your mission” went largely unheeded. Two exceptions were concerns raised about state testing requirements and teacher certification rules.

Personalized learning was front and center, dovetailing with the goals of some big philanthropists.

The theme of the day was the notion of tailoring teaching to individual students — alternatively called personalized, customized, or student-centered learning.

This approach aligns with the agendas of several influential education foundations, namely the Emerson Collective, the Bill and Melinda Gates Foundation, and the Chan-Zuckerberg Initiative. (Emerson and Gates are both funders of Chalkbeat.)

Among the speakers was Diane Tavenner, the founder of Summit, a charter school network that also provides software to district schools to support tech-based personalized learning. Summit has been supported by the Gates Foundation, won an XQ prize from the Emerson Collective, and is backed by Chan-Zuckerberg.

Mark Zuckerberg specifically mentioned the group in a recent post describing his approach to charitable giving. “Our partnership with Summit Public Schools has helped encode their teaching philosophy in tools that will be used in more than 300 district, charter, and private schools this fall,” he wrote.

The leader of the Grand Rapids Public Museum High School, which also won a $10 million XQ prize, was present, as was a representative of Leap Innovations, a nonprofit group that consults on personalized learning and has been praised by Bill Gates and Jim Shelton of Chan-Zuckerberg.

Those not at the summit included fully virtual charter school operators — like K12 or Connections Academy — who DeVos and some other school choice advocates have praised as innovative, but that research has found lead to large drops in student achievement.

There were bold claims of success, but little new evidence.

DeVos and other participants appeared confident that their focus on personalized learning will succeed, despite the limited evidence to date. Participants made big assertions, including district leaders saying that test scores and graduation rates had improved after moving to a different approach. But it’s difficult to say whether a more personalized approach deserves credit for these gains, and there was little reference to research evidence throughout the conference.

Summit, for instance, has not been the subject of much rigorous external study. The closest may be a recent report by Stanford’s CREDO, which only examined about 400 students in the Summit network. It found the schools had no statistically significant effect on reading test scores and small negative impacts in math. Summit has produced an internal analysis showing that students using its software made faster than average growth on a national test.

In general, personalized learning advocates highlight older research on the benefits of one-on-one tutoring, studies finding that specific math-focused computer programs can lead to gains, and a RAND report pointing to gains in schools that have adopted personalized learning. The RAND researchers, though, have urged caution.

“I worry that the positive results that have come out of our studies are generating a bit too much enthusiasm,” RAND researcher John Pane told Education Week in November. “I think people see the headlines, but they don’t see the limitations of the research that’s happened so far.”