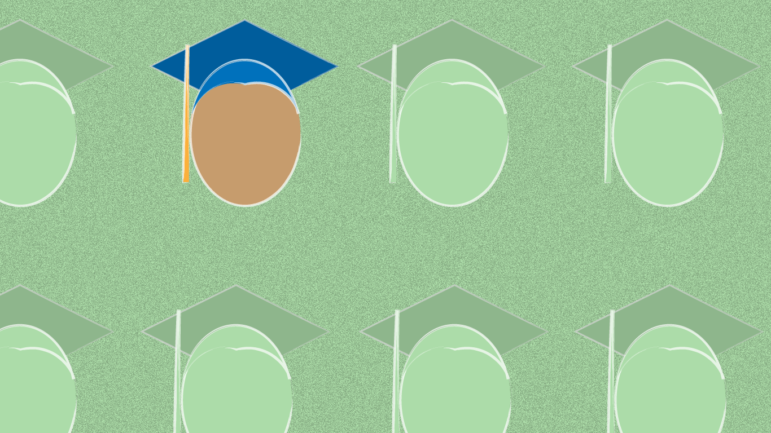 The number of GEDs awarded in state prisons in 2015-16 dropped to about a tenth of what it was the previous year. Illustration by Jake Kara / CT Mirror

Moving high school equivalency tests online put them out of reach for much of Connecticut’s prison population in 2015.

In 2015-16, just 68 prisoners earned a GED, a high school equivalency diploma, down from 781 the year before, according to annual performance reports by Unified District 1, which runs education programs in Connecticut correctional facilities. The numbers have started to recover– but slowly. District officials said 165 students earned GEDs in 2016-17.

The 2015-16 drop was caused in part by moving the test from pen-and-paper to online-only, according to that year’s annual report.

The test was moved online in 2014, but Unified School District 1 got a one-year extension from test company Pearson VUE to keep doing the paper-and-pencil tests. However, it took the district until July of this year to get all of the facilities online with GED testing.

“We anticipated a drop in the number of GEDs for our population while we transitioned to the computer-based required testing,” said Karen Martucci, a spokesperson for the school district.

“As you can imagine,” she said, “our students work in a very different environment from those in our community schools. Our first challenge was identifying space to dedicate to the computer testing areas. Once this was accomplished we moved forward with installing computers and wiring the system. In addition to the infrastructure challenges, we had to get the offender population familiar with the general rules of engagement with a computer system since for some [this] was a new challenge in itself.”

USD 1 officials expect the GED numbers to go back up, but they can’t say by how much because they said the fluctuating nature of the prison population makes reliable projections difficult.

Other factors could be contributing to the decline, Martucci and Acting USD 1 Superintendent Maria Pirro said. The tests were made more difficult when they were moved online and changed to align with the Common Core standards, and the scoring got more strict. Test takers now need passing scores on each of the four sections, while in the past they could pass based on a combined score. When those changes were made and the test was moved online in the same year, Pirro said the district decided to limit GED testing to only enrolled students, which could further impact the numbers.

Education in prison is considered a key part of reducing recidivism. A widely cited 2013 Rand Corporation report found inmates who participated in education programs were 43 percent less likely to commit new crimes after release and were 13 percent more likely to be employed.

“We know making educational options available in the prisons is a way to reduce crime by reducing recidivism,” said Mike Lawlor, Connecticut’s under secretary for criminal justice policy and planning.

According to the 2015-16 USD1 report, 55 percent of Connecticut Department of Correction inmates don’t have a high school diploma or GED, and “the average skill level of students upon entry into a school program is between the fourth and fifth grade.”

Connecticut isn’t alone in having had challenges providing online testing to inmates, according to Sean Addie of the U.S. Department of Education’s Correctional Education office.

“Because this is so relatively new, there hasn’t been really any research on this,” Addie said. “Anecdotally, yes, this has been happening across the country just because it is harder to get education online.”

Addie said, “The move to online-only [testing] has made it really hard for correctional facilities because they do not have Internet access or they have very limited Internet access that is controlled.”

Technology and Internet access in prisons generally lags far behind the outside world, Addie said.

In a 2013 survey of 42 state corrections departments described in a 2015 policy brief by the U.S. Department of Education, only 14 percent said students at one or more of their facilities was allowed to have restricted access to the Internet. Security concerns are the most commonly cited reason for denying Internet access.