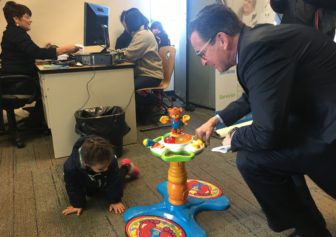 Gov. Dannel P. Malloy plays with an evacuee while her family receives services at a center for victims of Hurricane Maria.

In a visit to a temporary Hartford relief center Wednesday, Gov. Dannel P. Malloy criticized President Trump for the federal government’s response to the damage inflicted by Hurricane Maria on Puerto Rico, where half the island is without power 100 days after the storm’s landfall.

The governor estimated that thousands of Puerto Ricans have traveled to Connecticut since the hurricane hit. Nearly 2,000 students from the island have registered in public schools in Connecticut.

“I believe that if this was a mass exodus from South Carolina because of a storm, we would be responding very differently than a natural disaster in the Virgin Islands and Puerto Rico,” Malloy said.

Site coordinator Aura Alvarado said the facility has aided nearly 1,300 individuals since it opened on Nov. 1. Alvarado said housing, transportation and employment are the three major issues the islanders face.

Alvarado, who also is director of communication and community relations for CREC, said FEMA has extended its Transitional Sheltering Assistance program for Puerto Ricans unable to return to their homes through March 20. But the government has yet to develop a plan for those families after program ends.

Dora Schriro, the commissioner of the Department of Emergency Services and Public Protection, said officials are unsure how many people have migrated to Connecticut since Maria hit Puerto Rico on Sept. 20.

More than 1,750 students displaced by the storm have enrolled in public schools here, with residents of 181 households currently using the temporary sheltering program, she said. About 1,700 people in Connecticut have registered with FEMA for storm-related assistance.

Malloy and Schriro zigzagged the facility, inspecting rooms converted into a clothing boutique, a food pantry, a place to sort donations. Malloy also sat down with a displaced family, talking to them in private.

The relief center is scheduled to close Feb. 28 when its lease expires. Malloy said Hartford is going to need a center, and that the state will help to find an alternative.