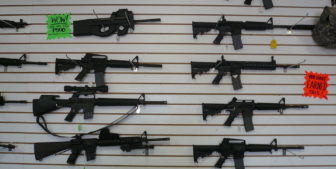 Connecticut has more firearms-related law provisions than almost any other state.

In 2017, the state had 89 such provisions, placing it behind only California (106) and Massachusetts (100), according to an inventory maintained by the Boston University School of Public Health and published at StateFirearmLaws.org.

The 133 provisions tracked from 1991 through 2017 by StateFirearmLaws.org are summarized below in order from most to least widespread, with notes on whether Connecticut has each provision, and if so when it was first adopted.

In some cases researchers might identify Connecticut as lacking a specific provision according to how the researchers classified the laws, but a different provision or combination of provisions might have a similar effect.  This database prioritizes classifying and broadly comparing firearm legislation across every state, which has some inherent difficulties.

Researchers who compiled the data wrote this in a 2016 report: “Other resources may provide users with a deeper understanding of individual provisions, while our database serves as an efficient way to compare the broad scope of state firearm laws across the country.”