On MLK Day, a reminder of the ‘appalling silence’ of good people 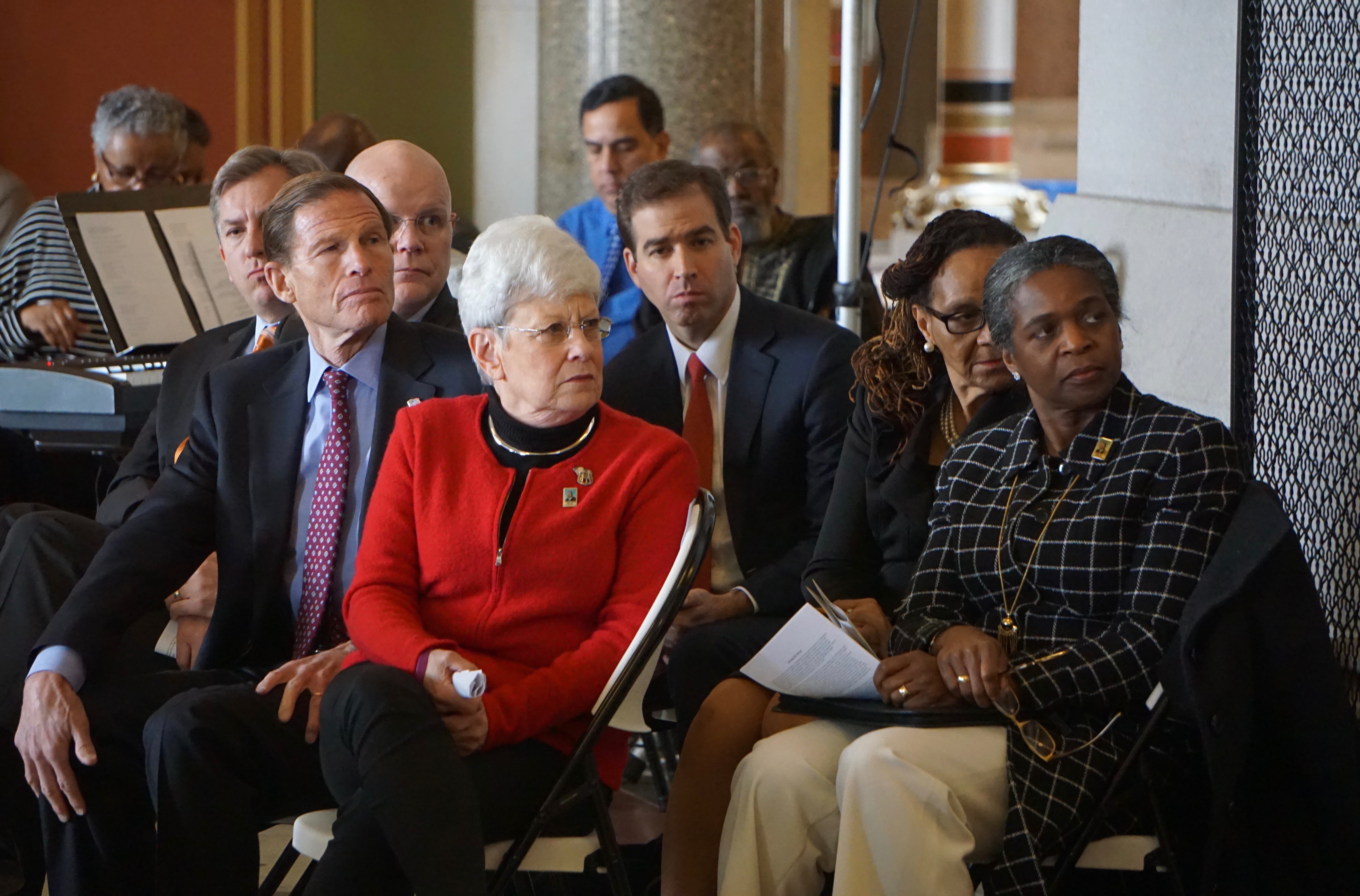 Controversy over President Trump’s comments about immigrants from Haiti, El Salvador and Africa weighed heavily Monday over the celebration at the State Capitol of the Rev. Martin Luther King Jr., where a rabbi repeated King’s warning about the need to repent not only for the “hateful words and actions of the bad people, but for the appalling silence of the good people.”

The president’s surname went unmentioned, aside from the Rev. Stephen W. Camp’s use of it as a verb, saying that the annual observance of King’s birth and the ringing of bells are meant to show that King’s vision “is still able to trump hateful rhetoric and acts that engender fear and divide us.”

The ringing at noon of Connecticut’s reproduction of the Liberty Bell coincides with similar ceremonies that have been held since Martin Luther King Jr. Day was first observed 32 years ago, grudgingly in some states. In Alabama, the holiday still is listed on the state’s official calendar as “Robert E. Lee/Martin Luther King Jr. Birthday Day.”

“This day has never been more important,” U.S. Sen. Richard Blumenthal, D-Conn., told an audience in the north lobby of the State Capitol, where artifacts on display include a Civil War cannonball embedded in a tree trunk. “Our democracy has never been more endangered by forces of hatred, forces that would drag us down.”

Trump’s reported referral in a meeting with congressional leaders to Haitians, Africans and others as “these people from shithole countries” whose entry into the U.S. is less desirable than those from nations like Norway generated condemnation at home and around the world.

The president’s defense unfolded strangely, with the administration declining to dispute the accounts overnight, then Trump denied some of the attributed language in a series of Tweets.

Two Republicans at the meeting first said they did not hear the president make the remark, then unequivocally insisted he never said it. Others said the accounts were accurate.

The Capitol celebration was gentler on the president than was the sermon Rev. Raphael G. Warnock delivered Sunday at the famed Ebenezer Baptist Church in Atlanta, where King was co-pastor until his death. Warnock said Trump is “a willfully ignorant, racist, xenophobic, narcissistic con man.”

In Hartford, Rabbi Debra Cantor made no direct reference to the Trump controversy, but chose to read a long passage from the letter King wrote to his fellow clergymen from a Birmingham jail in 1963, defending his activism against those who counseled patience in opposing racial and economic injustice. Cantor didn’t say so, but the passage was one directed at white moderates discomfited by the protests that led to King’s jailing.

“We will have to repent in this generation not merely for the hateful words and actions of the bad people but for the appalling silence of the good people,” Cantor said, quoting King. “Human progress never rolls in on wheels of inevitability; it comes through the tireless efforts of men willing to be co-workers with God, and without this hard work, time itself becomes an ally of the forces of social stagnation. We must use time creatively, in the knowledge that the time is always ripe to do right. Now is the time to make real the promise of democracy and transform our pending national elegy into a creative psalm of brotherhood. Now is the time to lift our national policy from the quicksand of racial injustice to the solid rock of human dignity.”

Lt. Gov. Nancy Wyman said no one should demean the contributions of immigrants, many of whom from nations that are struggling economically. “Immigrants made this country the best country in the world,” she said.

Others speakers bemoaned what they saw as the endless cycle of the president demeaning people of color.

Hartford Mayor Luke Bronin, a Democrat whose administration is flying the Haitian flag over city hall, referenced the speech King delivered April 3, 1968, the day before his assassination, when the civil rights leader insisted he had been to the mountaintop, glimpsing a promised land of equality and justice he might not personally ever reach.

“But today we have a president who calls Mexicans rapists, Puerto Ricans ungrateful, said that we don’t need immigrants from countries like Haiti or Africa, and said that there are some very fine people among the hooded, torch-carrying racists who marched in Charlottesville,” Bronin said.

“Like many of you, I watch the news, and I shake my head. And I get angry. And sometimes I think I need to look away,” Lembo said. “Then I look back and I’m angry again. And the cycle just continues to repeat itself. It’s exhausting.”

Lembo said people must emulate the optimism of King.

“We cannot lose faith,” he said. “We cannot lose heart, because if we do then those that engage in whatever strategies they are engaged in will win.”

Angel Wells and Michael Moore, two young people, took turns reading selections from King’s writings. They spoke with a passion that moved James O. Williams, the chairman of the commission that oversees the celebration. He told them, “You’re making an old man cry.”