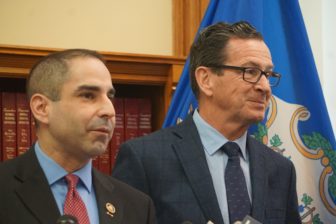 Thomas Saadi acknowledges the presence of his wife and twins, prompting a smile from the governor.

Thomas J. Saadi, an Army Reserve officer who has held senior jobs in the state Department of Veterans Affairs for nearly three years, was named Tuesday by Gov. Dannel P. Malloy as his choice to lead the department as commissioner.

Saadi, a former general counsel and chief of staff at the department, has been acting commissioner since the resignation in October of Sean Connolly, who is now seeking the Democratic nomination for governor.

The governor’s choice of Saadi is subject to confirmation by the General Assembly, which convenes its annual session next month.

“We take veterans affairs very seriously,” Malloy said at a press conference introducing Saadi. “That’s why we were the first state to end chronic homelessness among veterans. That’s one of many accomplishments on that front. We need to keep that work up and going.”

About 200,000 veterans are living in Connecticut.

“What I can see as our challenge going forward is making sure that we are able to reach out, not only to those who are veterans now, but future veterans, a new generation of veterans, particularly in our Guard and Reserve,” Saadi said.

The National Guard and the Reserves have played outsized roles in the past 15 years as the U.S. has waged wars in Afghanistan and Iraq, stressing the full-time military. All branches of the military have reservists who are civilians serving part-time until activated for deployments. The Guard has Army and Air Force components, subject to state and federal control.

Saadi said the Department of Veterans Affairs is trying to connect to younger veterans with a recently revamped web site and a mobile app.

Saadi, 48, a former assistant attorney general, is a major in the Army Reserve serving as the chief legal officer of the 411th Civil Affairs Battalion. He is a member of the Danbury City Council and a graduate of Western Connecticut State University and the Quinnipiac University School of Law.