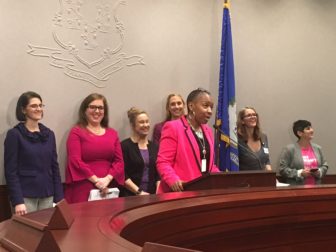 As Connecticut legislators gear up for the start of the 2018 session, female lawmakers on Monday outlined plans to introduce several bills targeted at protecting women’s health services.

The five state legislators were joined by local advocates as they made their announcement on the 45th anniversary of the Supreme Court’s Roe v. Wade decision legalizing abortion nationwide. They stressed a need to address health disparities among women and protect benefits currently provided under the Affordable Care Act.

“We’re going to make sure that in Connecticut women will be able to maintain the health care benefits that they deserve, regardless of what the failed leadership in Washington, D.C., decides to do,” Flexer said.

The legislators plan to introduce a bill that will ensure state health insurance plans include benefits like outpatient care, prenatal care, ongoing care for children, prescription medicines, lab tests, and mental health and substance abuse disorder services among others.

Porter called the lack of options available to women of color disheartening and said there needs to be an increase in sex education and contraceptive accessibility.

“And in doing that not only do we empower black women and girls with the authority to choose what happens over their bodies and to choose when they decide to have kids and … start families, we also empower them to bring themselves out of poverty,” Porter said.

An additional bill will focus on what the legislators called “crisis pregnancy centers,” which they said attempt to pose as family planning clinics while providing medically inaccurate, anti-choice information.

The lawmakers also said they were committed to establishing more parity in the legislature by getting more women on the ballot.

“I think I can safely say every single one of us is actively engaged in getting more women on the ballot for the legislature this year — so that next year when we’re here, we’re going to have four times as many women standing at this press conference,” Flexer said.