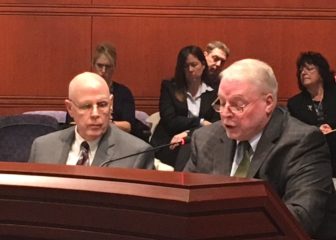 The incident involving 40-year-old Marquis Marquez, who was later arrested and placed on unpaid leave before being fired, doesn’t represent the standards the Judicial Branch expects of its employees, Judge Patrick L. Carroll III said.

Marquez, of New Britain, was charged with sexual assault in November after authorities began an investigation last August.

“I will say again I’m outraged, I’m disappointed, and frankly I’m saddened by the allegations … it is an embarrassment to me personally and to the other hard-working and dedicated employees of the Judicial Branch,” Carroll said. “Simply stated, it’s unacceptable.”

Department of Children and Families (DCF) staff and Child Advocate Sarah Eagan also attended the legislative information forum to testify on the incident and answer lawmakers’ questions. The detention centers house juveniles who have been accused of crimes and are awaiting trial.

Carroll said the incident was inconsistent with training and supervision provided to employees. But, he said, the Judicial Branch was evaluating policies and procedures, and making necessary modifications to “prevent anything like this ever happening again.”

Leo Arnone, a former Department of Correction commissioner, conducted an external review of the detention centers after the incident. He visited the facilities, interviewed staff and detainees, and attended relevant training programs.

“There were some bad people that did bad things here, no doubt about it,” Arnone testified. “But at the end of the day, in general, these facilities are still operating at a level that is better than any I have seen — and I have seen over 60 in my career in other states.”

But Arnone’s review found some issues, including a need for more cameras, more female staff and more tours by detention superintendents during different shifts. The Judicial Branch has acted immediately to implement those changes, Arnone said.

Gloria Campos, a program manager for DCF’s special investigations unit, noted the department’s own investigation of the facilities raised concerns about supervisory staff access to female detainees and their confidential information. DCF also was concerned the branch failed to report multiple incidents to DCF, Campos said.

Republican state Sen. Len Suzio of Meriden pressed the DCF officials on why Commissioner Joette Katz wrote a letter making “serious and troubling allegations” about a prevailing culture at the detention centers. Suzio quoted a part of the letter which said that female detainees at the centers often assume staff are willing to have inappropriate contact with them.

DCF officials also said supervisors would warn staff that girls would make false allegations against them and they should therefore be careful. Numerous detainees’ also were unwilling to be interviewed by the department, the DCF officials said.

“…If the message is be careful because girls will make false allegations, that’s not the message that needs to go out,” DCF Assistant Legal Director Maureen Duggan said. “The message needs to go out that if allegations come forward, they need to be reported to DCF because that’s often our scurrying point for looking.”

Carroll expressed disagreement with the claims, but said he didn’t want to “go tit for tat” to discount them. The chief court administrator promised to examine the issues raised and commited to making necessary changes.