Request for school construction dollars is a record low

The administration of Gov. Dannel P. Malloy is seeking a record low amount of state funding to help cities and towns build or renovate public schools. 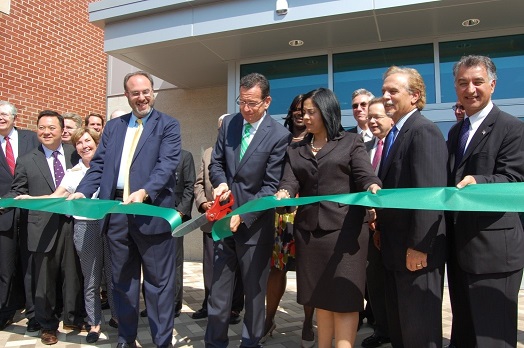 Gov. Dannel P. Malloy cuts the ribbon at the 2014 opening of J.M. Wright Technical High School in Stamford, which the state spent millions to renovate.

The $281 million the administration has requested from the legislature for the upcoming fiscal year is the result of fewer applications from towns seeking aid, said a spokesman for the governor’s budget and policy office.

Over the past decade, the average annual amount recommended by the executive branch has been about $500 million. Additional projects are typically added to the state budget based on legislative priorities.

There could be several reasons for the smaller list this year, including local unwillingness to pay for a community’s share of a project during a sluggish economy, declining enrollment, or a stricter application process the state’s Department of Administrative Services (DAS) has begun using.

Whatever the reason, the smaller project list comes at a time when Connecticut is close to its credit card limit for building or renovating schools or tackling other state building and capital projects.

The two-year state budget that legislators approved last fall left a placeholder of $450 million for unspecified school construction projects in the 2018-19 fiscal year.

Connecticut sets a debt ceiling equal to 1.6 times its annual General Fund tax receipts. Whenever the legislature has authorized borrowing in excess of 90 percent of that ceiling, the governor must recommend projects to be canceled to bring total authorizations back below that 90 percent mark.

The amount of borrowing included in the adopted fiscal 2018-19 budget equates to 89.23 percent, according to the state treasurer’s most recent calculation in October. Since then, however, it remains unclear whether state revenue will continue to shrink, as it did over the previous fiscal year, which would probably draw the state closer to its debt ceiling.

“I would say it would be a trend and will continue because of the uncertainty of budgets throughout the state of Connecticut,” Currey told the legislature’s School Construction Project Priority List Review Committee before they unanimously approved and forwarded the list to the General Assembly for consideration. “Towns are unsure that they would be able to bond the amount they would want to do. So they are putting some of it off until they absolutely have to in many cases.”

But, she added, “I think some of it is the control that we have put in place helps them make that decision, an informed decision.” Those controls include an overhaul in the standards and guidelines applicants must follow when seeking state support.

Bob Rader, the executive director of the Connecticut Association of Boards of Education, said during an interview he thinks the economy and the shrinking school-aged population are probably driving the decline.

“Districts may feel that they may not need to build new schools or refurbish existing schools,” he said.

Also, Rader said, “There is this feeling in the state that the economy has gone down, and so it is much harder to ask taxpayers for new or renovated buildings that they may need,” said Rader.

The state reimburses districts between 10 and 80 percent of the cost of school projects, depending on the wealth of a community. The state funding being proposed will cover about half of project costs, indicating much of the aid is going to middle- and higher-income communities. (See the full list of projects here.)

It’s unclear what exactly this slowdown means for the condition of schools in Connecticut. The legislature changed state law two years ago so that a new survey on the condition of each school will not be released until 2021.

The most recent survey, from 2013, found that one of every 40 elementary schools needed asbestos remediation and there were no immediate plans to address the problem. One out of every 25 elementary or high schools and one out of every 29 middle schools had a roof problem and repairs had not been scheduled to fix the underlying issue. One in 13 schools had poor air conditioning and one in 70 had a poor heating system.

In the state’s most impoverished districts – Bridgeport, Hartford, New Haven, New London, New Britain, Waterbury, Windham – a lower percentage of schools had areas of their buildings rated as being in fair or excellent condition, according to the survey.

In the most affluent districts – Darien, Easton, New Canaan, Redding, Ridgefield, Weston, Westport, and Wilton – 88 percent of the schools either had been built in the last 20 years or had had a major renovation, compared to 71 percent in the high-poverty districts.

In an era of declining enrollment in many communities, the survey also found that 71 percent of high schools were less than 90 percent full and less than 85 percent of middle and elementary schools were full. (See your school’s survey by clicking here.)