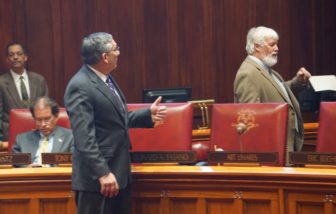 With little debate or fanfare, the General Assembly voted Wednesday to override Gov. Dannel P. Malloy’s veto of a bill that delays cuts in a Medicare assistance program until July, quieting a public outcry over tighter eligibility standards.

By votes of 131 to 4 in the House and 30 to 1 in the Senate, legislators delivered on a promise to fully fund a program that uses Medicaid funds to help poor elderly and disabled patients pay for health care costs that Medicare does not cover.

New eligibility limits for the Medicare Savings Program that lawmakers wrote into the state budget were projected to save $54 million this fiscal year and about $130 million in 2018-19. The override vote delays the imposition of the new limits until July 1.

Unless the legislature makes further changes in the eligibility standards in the 2018 session that opens next week, lawmakers could face another outcry over the program this summer, as legislators turn to their campaigns for re-election.

The Malloy administration had defended the budget cut, noting that lawmakers had broadened the eligibility rules in 2010, ignoring a budget crisis as they raised income limits and eliminated an asset test for the program.

The legislature’s response to the public complaints over the budget cut has become emblematic of the political difficulty the General Assembly has in reducing state services to cut spending.

Legislators found the extra $54 million for the Medicare program this fiscal year by:

“The bipartisan budget changes adopted to fund the Medicare Savings Plan are wishful thinking, double counting and pushing off problems into the future,” Malloy wrote in his veto message. “This bill has essentially done nothing to the state’s budget operations in order to fund the restoration of the Medicare Savings Plan by either adding new revenue or reducing state spending levels.”