As the General Assembly prepares for its new session and yet another battle over the state’s finances, the Department of Energy and Environmental Protection still is dealing with fallout from the budget signed into law in November.

Slid into that budget during final negotiations was a provision that limits DEEP to 90 days to either approve or deny a laundry list of nearly four-dozen permits. There is no provision for additional time if needed and, perhaps most worrisome to DEEP, if it doesn’t take action, the permit automatically goes into effect. The provision went into effect on passage, which meant DEEP had no preparation time.

“I believe this is awful public policy on the part of the General Assembly,” an atypically angry DEEP Commissioner Robert Klee told a roomful of environmental activists last month. “Let me be very clear on this point: I will never put the health or safety of the residents or the environment of this state in jeopardy by this automatic approval. My staff has been spending an inordinate — and wasted — amount of time to interpret this bad law in the least harmful way.”

As Klee, activists and some legislators work toward repeal or at least modification of the provision – section 561 – how it made its way into the budget remains unclear. It differs in critical ways from an initial bill that cleared the Environment Committee last session but never made it to the floor.

That bill, which DEEP did not support either, carried a 90-day limit on all permits, but DEEP would have had the option to request additional time at that point. It was proposed by Rep. J.P. Sredzinski, R-Monroe, after the permits for a proposed Super Walmart in his district languished for 18 months before DEEP granted them all with no changes.

“To me that’s not responsible government,” he said. If there’s an environmental concern, that’s one thing, he said. And he pointed out that Walmart eventually dropped the project. The main reason was changes to Walmart’s business model, but Sredzinski believes the permit delay didn’t help. “There needs to be more timely approval,” he said.

Connecticut’s business community has complained about that for years, arguing that it makes the state less than hospitable to businesses.

He said he has no idea how the final version got into the budget. “It was a surprise to me as much as it was to anyone else,” he said.

“There’s nothing that prohibits them for asking for more information,” said Senate Republican leader Len Fasano of North Haven, who was among the small group of final budget negotiators.

Fasano also said the list of 45 came from the non-partisan Office of Legislative Research in cooperation with DEEP. But communication with OLR in September provided by DEEP seems to indicate OLR only asked for a list of permits DEEP was responsible for without any context for why. OLR also asked for it quickly. DEEP said there was no further discussion. There was no public hearing on the language that appears in the budget.

Some of DEEP’s most critical permits – water discharge permits, air emissions permits, licensing of landfills – are not on the list of 45. But the list contains many complex ones, including authorization for licensed environmental professionals (LEPs), who are non-DEEP employees working in DEEP’s program for remediating contaminated land and groundwater.

The applicants’ qualifications are evaluated. They have to take a test given through a licensing board, and then DEEP monitors their work.

“If we missed one, or somehow one got through after 90 days – we wouldn’t even know what to expect they’d be able to do,” said Dean Applefield an attorney at DEEP who has been sorting out the implications of the new regulation. “It would seem to say they’d be able to act as an LEP.”

“That recent fire in Willimantic highlights the need to make sure those operators know what they’re doing,” Applefield said. The Willimantic operators were in place long before the new 90-day rule. “There are a litany of permits covered by this that would have extremely significant potential environmental consequences if done by someone who wasn’t qualified, wasn’t trained.” 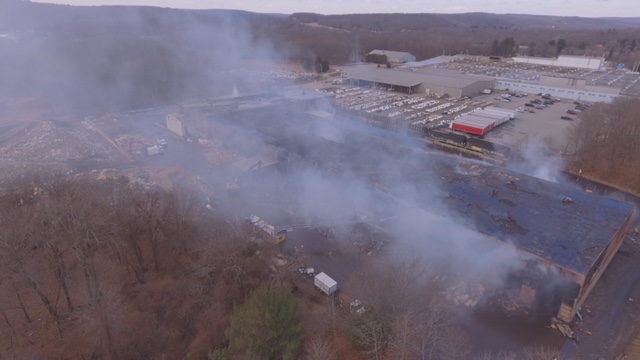 Smoke rises from a recent fire at the Willimantic Waste Paper Co.

There are cases such as forest practitioner licenses for which the competency exam is only offered once or twice a year. “If someone comes to us and applies to take an exam, if we don’t have an exam scheduled for four months, does that mean they automatically become a certified forester,” asked Susan Whalen, DEEP’s deputy commissioner for Environmental Conservation.

Even some of the seemingly less critical ones could cause problems – like fishing tournament permits. They can take several months as communities negotiate back and forth, trading dates and locations that don’t conflict. “We’re probably going to have to say no to some groups that we might otherwise try to accommodate,” Whalen said.

Then there are ones DEEP doesn’t understand at all, such as fishing licenses, which you basically get online. Or property transfers. That’s a program that oversees the sale of contaminated property and who takes responsibility for cleanup. It requires sample collections, reports, and evaluations of reports.

“Cleaning up a contaminated piece of property is not a 90-day proposition by any stretch,” said Bob Kaliszewski, DEEP’s deputy commissioner for environmental quality.

He said to deal with the initial 90-day rule startup DEEP has had to redirect its diminished staff – down by nearly 20 percent since the department was formed in 2011 and expected to shrink significantly because of attrition in the next five years. He also expects that pulling staff from their normal jobs will continue as permit applications come in – often in seasonal spurts.

“I don’t have a number,” he said referring to how many staff have been put on the task. “But I know that I’ve personally spent more time than I should be spending on dealing with this.”

Klee in his comments last month was equally blunt: “This 90-day stupidity is exactly the type of waste of time that I don’t have the time, staff, or resources to deal with.”

Sen. Ted Kennedy Jr., D-Branford, co-chair of the Environment Committee noted the absurdity of trying to speed up permitting at DEEP while cutting its budget.

“You can’t have it both ways,” he said. “I think this is actually going to have the opposite effect for what the business community is hoping. If there’s even a question, the agency is going to deny, and then the applicant is going to have to start from the beginning again.”

It’s going to be like Groundhog Day, said Leah Schmalz, chief program officer of Connecticut Fund for the Environment. “It’s horrific policy,” she said, “the idea that somehow the state thought it would good policy to put a limit on the intensity of their review of environmental impacts.”

There’s no specific plan yet, but there is discussion of finding a legislative solution this session.

The original bill’s sponsor, Sredzinski, was shocked to learn of the changes to his proposal that wound up in the budget, saying it seemed a little stringent. “I hope they look at that closely and balance that timely answer, but make sure they don’t do anything to jeopardize the environment,” he said. “I would suggest keeping what I originally proposed so that it does provide some structure of a time frame.”

CBIA’s Brown said he prefers modification to repeal. “We would be happy to engage in any dialogue,” he said. “I think it would be a missed opportunity just to scrap the whole process of permit reform.”

Fasano said: “I’ll listen to why they feel this list is over-inclusive.”

As far as where DEEP is willing to compromise: “My bottom line, regardless of what we end up with, is that nothing is automatically approved,” said Kaliszewski. “It’s not good business; it’s not good government.”