Labor in New Haven bets on MGM casino for Bridgeport 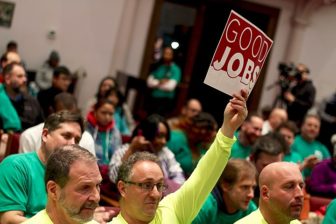 Labor union members turn out at a rally in New Haven in support of a plan by MGM Resorts International to develop a casino in Bridgeport.

At a rally Feb. 6 at UNITE HERE’s hall at First & Summerfield Church on Elm Street, three mayors, four state legislators (two of them Republicans), a gubernatorial hopeful, nine alders and a crew of workers from other MGM properties spoke about the jobs that a resort casino could bring to the region.

Betting on a strong market in Southern Connecticut, with its access to trains from Manhattan and ferries from Long Island, MGM has proposed building a $675 million, waterfront casino in Bridgeport. A casino there has been an ambition for multiple developers, including Donald Trump.

The company has also agreed to open a workforce development center in New Haven, where 2,000 employees would be trained. “This resort will need people who handle money and luggage; people who plan menus, prepare the food and serve it; people who buy advertising; and people who manage the payroll for all those jobs,” Mayor Toni Harp said. The partnership deals New Haven into the pack with Bridgeport as a political team to work alongside UNITE HERE in Hartford, where a legislative showdown against Native American tribes will take place.

At Tuesday’s meeting, Bob Proto, UNITE HERE — Local 35’s longtime president, announced that he has struck a neutrality agreement for the proposed casino. Essentially, that means MGM, which already works with UNITE HERE at 27 hotels like the Bellagio and Mandalay Bay on the Vegas Strip, won’t interfere with organizing employees at the new project. So workers would have a union and earn living wages and benefits.

“This state needs new ideas, and now, a private investor wants to come in, who won’t put a burden on taxpayers,” Proto said. “But we have some folks that are cynical and narrow-minded in this state. Ask the folks in this region, in Bridgeport, if they want a good job with benefits. Because if you go against this project, you’re going against opportunity. And the fact is we’re not going to let that happen.”

After jamming out to the 1970 single “When Will We Be Paid?” by The Staple Singers, UNITE HERE organizer Rev. Scott Marks took the pulpit and got the crowd revved up. “This is real,” he told roughly 85 union members in attendance. “Bring the jobs, that’s what we need. Bring the jobs, that’s how our family eats.”

Wearing green shirts that read, “7,000 Jobs / No Taxpayer Dollars,” they rose to their feet and cheered for each speaker. (Bridgeport’s Mayor Joe Ganim and the Republican politicians were present but didn’t take the microphone.) At one point, led by Walker, they burst into song, chanting, “We are the union, the mighty, might union.”

The room was captivated by testimonials from current MGM employees, who traveled from other properties in Detroit, Atlantic City and Washington, D.C., to speak in New Haven.

Alicia Weaver, a room attendant at the Detroit casino, described how the casino helped her go from a dropout to a wage-earner. After being hired as a restaurant server 19 years ago, Weaver said she’s now earning $16.35 hourly, about double the state’s minimum wage, and she has two raises on the way. And she said it’s turned her hometown around. “You should see Detroit from 20 years ago. MGM has been good to our city,” Weaver said. “It’s because of them, our city has a shining light at the end of the tunnel, and they can do it for you as well.”

Tuesday’s rally was timed with the announcement Tuesday of a new state bill, expected to be filed this week, that would establish a competitive bidding process for a casino license. The bill also repeals last year’s approval of a gaming facility in East Windsor. That casino was intended to compete with MGM’s new resort across the state line in Springfield, Mass. 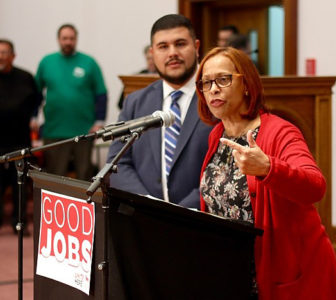 New Haven State Rep. Toni Walker, the bill’s co-sponsor, said that the federal government has held up approval of the state’s latest gaming compact with the tribes — after MGM’s private campaign by two high-powered lobbyists — creating a delay that Connecticut and its shaky financial outlook don’t have time to wait out.

“It could take years, and we don’t have years,” she said. “We need to get these jobs and training. We need to move forward and allow other business.” She added that a competitive process was the only fair way to pick an operator, with “nothing behind closed doors.”

MGM favors an open bidding process, so it can win business away from a competitor. “The legislative proposal announced today mirrors industry best practices by establishing a truly competitive, open and transparent process,” Uri Clinton, MGM senior vice president and legal counsel, said in a statement. “That’s really all MGM has asked for from day one: a fair chance to compete for Connecticut’s first commercial casino license rather than seeking an exclusive no-bid hand-out.”

The state would need to pass the competitive bill in order for MGM to even pursue permission to build the first commercial casino off tribal land in the state. Another bill would be required to actually give them the license, and that would come with a price tag. If that happens, a longstanding state deal giving the tribes exclusive rights to run casinos would expire, along with the government’s share of slot machine revenues. That payment was worth $264 million last year, way down from the peak of $430 million a decade ago. MGM is promising that a Bridgeport casino would bring in more revenue; its political proponents are basically making a bet that that will be true.

MMCT Ventures, a partnership of the Mashantucket Pequots and Mohegan tribes came out in opposition to the bill. “Let’s call this bill what it is: the MGM Massachusetts Protection Act,” Andrew Doba, a spokesman for the group, said in reference to the Springfield casino. “A bill that will cost Connecticut $1 billion in revenue and eliminate 4,000 jobs was a bad idea last year, and is still a bad idea.” 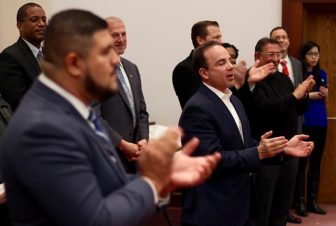 As gambling expands in neighboring states, some critics have questioned MGM’s end game: Is the company ready to open a casino in Bridgeport, or does it just want to crush the competition along the Massachusetts border?

MGM said it’s all in.

“We look forward to pursuing this opportunity as soon as the bill passes,” Clinton said in the statement. “We are fully prepared to present a compelling proposal that will create thousands of jobs, boost the state’s economy and drive tourism, offer significant opportunities for local businesses, and provide substantial revenue to the state and its municipalities. And we continue to believe that Bridgeport is the best location for a commercial casino … to achieve all of these objectives.

Some have criticized the idea of promoting casinos as economic development, in part because they promote gambling addiction.

Harp said that the state does need to line up help for those who develop an addiction to gambling, but she said those compulsive gamblers would make up only a sliver of the players. “Most people put up $20 or $50,” she said. “If they lose, that’s it. If they make money, maybe they’ll go to a five-star restaurant and have a meal that they otherwise wouldn’t. That’s what most people do.”