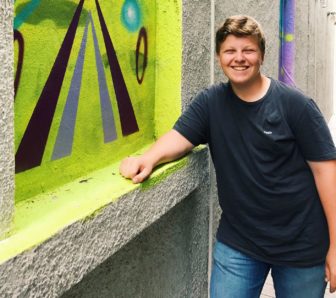 Newtown High School student Jackson Mittleman is demanding an end to gun violence, joining youth around the nation in calling on American young people to rally together in the wake of last week’s school shooting in Parkland, Fla., where 17 people were killed.

“We were on lockdown for four hours on the day of the Sandy Hook shooting,” Mittleman said. “Going home that day having unfortunately experienced first-hand the impact a gun can have on a community in one day — that’s why I feel it’s important to stand up and make people’s voices heard.”

There was evidence Tuesday that public support for stricter gun laws continued to grow.

A national Quinnipiac University poll, taken after the Florida shootings, found a large majority of American voters support tighter gun laws. The 66-31 percent margin marks the highest level of support for gun control ever measured by the poll.

“If you think Americans are largely unmoved by the mass shootings, you should think again. Support for stricter gun laws is up nearly 19 points in a little more than two years,” said Tim Malloy, assistant director of the poll.

The poll also found support for universal background checks stood at 97 percent, and 67 percent backed a nationwide ban on the sale of assault weapons.

Mittleman is one of a group of 13 students from across the country helping to plan a nationwide school walkout on April 20, the 19th anniversary of the Columbine school massacre in Colorado. Ridgefield High School sophomore Lane Murdock had the idea for the demonstration, which is being organized by the Women’s March Youth Empower.

That national walkout will follow another on March 14, the one-month anniversary of the Florida shootings. Students will be urged to leave schools for 17 minutes to honor those killed.

Survivors from the Florida high school have mobilized to create the March for Our Lives on March 24, where students will march in Washington, D.C., and other major cities to call on Congress to take action on gun reform.

“No special interest group, no political agenda is more critical than timely passage of legislation to effectively address the gun violence issues that are rampant in our country,” the march’s website said.

Mittleman said students at Newtown High School are trying to organize a bus to take students to Washington for the march.

“Students still have a right to have a say in what’s happening, even though we can’t vote, and I think that’s becoming more clear now more than ever,” Mittleman said.