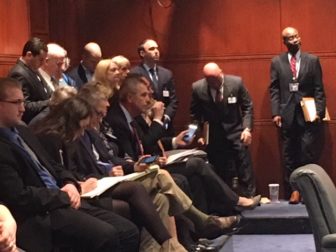 An 11th-hour uprising by rank-and-file members of a legislative committee Thursday resurrected an issue that two Senate co-chairs seemed to have tabled for 2018: Should the state be opened to  competition for a commercial casino in Bridgeport, as proposed by MGM Resorts International in its long war with two tribal competitors, the Mohegan Sun and Foxwoods?

On the final day for approving concepts to be considered in the three-month session that ends May 9, the legislature’s Public Safety and Security Committee voted 18-6 to override the Senate co-chairs by adding casino gambling to the panel’s agenda and then approving the subject for further debate and a public hearing.

The concept approved by the committee, which has jurisdiction over gambling legislation, was broadly written, allowing the legislature to consider opening Connecticut to commercial casinos beyond the one the state has authorized the tribal casino owners to jointly develop in East Windsor to undercut an MGM casino under construction in Springfield.

It is unlikely to lead to passage of legislation this year creating an open competition for MGM and other commercial casino operators to seek licenses allowing them to do business in Connecticut, where the casino industry is limited to two federally recognized tribes granted exclusive casino rights 25 years ago in return for sharing the profits with the state.

Gov. Dannel P. Malloy, a Democrat in his final year in office, has consistently opposed any gaming proposal that would endanger the profit-sharing deal in which the Mashantucket Pequots and Mohegans pay Connecticut 25 percent of gross revenue from slots at their two casinos, Mohegan Sun and Foxwoods. He said Thursday he saw little chance of a new casino bill reaching his desk.

The profit-sharing deal produced more than $260 million for the state last year and $7 billion since its inception.

The two Senate co-chairs, Sen. Tim Larson, D-East Hartford, and Sen. Tony Guglielmo, R-Stafford, had refused to place on the agenda casino expansion bills that were favored by the House co-chair, Rep. Joe Verrengia, D-West Hartford. Under power-sharing rules in place since the GOP won half the seats in the Senate in 2016, two of the three co-chairs must consent to placing a bill before the full committee.

Larson’s district includes East Windsor, where the tribes hope to jointly develop a casino on a hillside overlooking I-91, about half way between Hartford and Springfield. Guglielmo’s district covers a dozen communities in eastern Connecticut, not far from the two tribal casinos.

East Windsor has approved the project, but it is currently blocked by the refusal of the Department of the Interior to act on proposed amendments to Connecticut’s gaming deals with the tribes. The state law permitting the East Windsor project required Interior Department approval to ensure the revenue sharing in the existing agreements would continue.

Rep. Jeffrey Berger, D-Waterbury, moved to open the agenda, saying the legislature deserved an opportunity for a far-ranging debate on the future of casino gambling in Connecticut. The agenda already included a measure that would allow a debate on sports betting should the U.S. Supreme Court invalidate a federal law that now limits sports wagering to Nevada.

MGM says a Bridgeport casino, close to the New York market, could produce as much revenue for the state as the two tribal casinos. MGM has signed a development deal with the owner of a site on the city’s waterfront, but some legislators question whether MGM is sincere or trying to ensure that the legislature will not amend the 2017 law and drop the requirement for approval by the Interior Department.

Sen. Steve Cassano, D-Manchester, said there was no time for the legislature to adequately study casino expansion, since the committee’s deadline for sending bills to the floor of the House or Senate was just three weeks away.

“Let’s do it in the long session, when we have the time,” he said.

Verrengia said there is sufficient time to continue a discussion that opened two years ago, when the tribes first broached the idea of developing a casino off tribal lands to blunt the loss of market share to MGM, which spent $3.8 million lobbying in Connecticut last year, more than three times any other interest group.

“We’ll have as much public discussion and as much public input as it would take to fully vet it,” Verrengia said. “We’re certainly not going to limit discussion on an issue that could potnetially have a big impact on the state of Connecticut just because of time. We have plenty of time in this session to vet this issue and many others.”

Uri Clinton, a senior vice president and legal counsel for the Nevada-based MGM, was at the Legislative Office Building on Thursday, making one of his frequent trips from Las Vegas to Connecticut to oversee the company’s lobbying. He viewed the committee action as significant.

“There’s support for an open competitive process,” Clinton said. “There’s a lot of work to do, a lot of questions that we’re in the process of answering. But there’s support.”

“Ed showed yet again that he is a true fighter, unafraid to stand up for his constituents and against an attempt to prevent a real shot at major economic development for our entire region,” Ganim said. “We look forward to a robust, transparent debate on the future of gaming in Connecticut.”