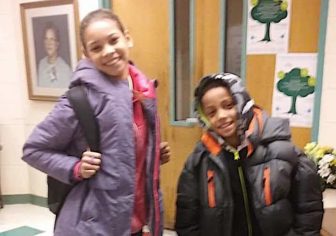 Washington – Ten-year-old Nairelys Vega and her 8-year-old brother, Jason Miguel Carrion, are among the more than 1,800 children from Puerto Rico who have migrated to the state and enrolled in Connecticut schools since Hurricane Maria decimated their homeland last September.

“It’s been difficult for them,” said Torres-Garcia. “First because they did not know the language, they didn’t speak English, and also because they were traumatized because they left all of their family and everyone they knew behind.”

“He would not smile; he would not play; he didn’t want to do anything,” she said.

Connecticut schools scrambled to accommodate the new arrivals — most of them non-English speakers — without additional resources from a cash-strapped state government.

After months of fighting over aid to last summer’s hurricane-hit communities, Congress finally approved a compromise budget bill earlier this month that will provide millions of dollars to help schools care for displaced students.

The budget bill provides $8,500 for each displaced student, $9,000 for each one that is not English-speaking like Nairelys and Jason, and $10,000 for disabled students requiring special education.

State House Majority Leader Matt Ritter, a Democrat who represents a Hartford-based district, has set up a working group in the General Assembly to try to provide “one-stop shopping” for displaced Puerto Ricans who need help.

He said “there is no question that schools are looking for additional money” to accommodate the influx of unexpected students, many with special needs, and is “very pleased” Congress finally offered some help.

He believes the displaced student funding, part of the budget agreement’s $44 billion hurricane response package, will be sufficient. But he said he’d consider seeking additional state funds to help schools with displaced students if needed.

“Obviously we have a difficult budget as it is,” he said.

According to the Connecticut Department of Education, there were 1,745 displaced students in Connecticut schools as of Feb. 16.

There were once more than 1,800, but those numbers have been dropping as some families return to Puerto Rico or move to other states. But many students, including Nairelys and Jason, are staying.

“My children are now accustomed to their school, and they are doing well,” said Torres-Garcia.

Hartford schools have had the most new arrivals, 376 at last count and 429 at the peak of the migration.

Azra Redzic, principal of Maria Sanchez Elementary School, said she was lucky. Her school had capacity to accommodate the new arrivals and the Hartford School District helped by allocating two new bilingual tutors and a half-time resource teacher to her school.

“The transition has been really smooth,” Redzic said, while noting that other schools in the state may not have been as fortunate. 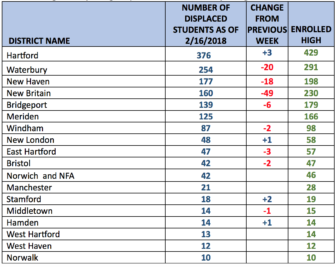 Distribution of displaced students among districts with 10 or more.

Redzic also said Maria Sanchez Elementary had bilingual classes in place, as well as a program that provided the displaced students with counseling and “buddies” to help them find the restrooms and the nurse’s office and make sure “they knew they were welcome.”

Torres-Garcia is grateful for the aid Maria Sanchez Elementary has provided her family since her children’s first day of class on Nov. 14, including counseling that helped her son Jason. She has no close relatives in Connecticut, and the family lived in a hotel until the school helped her find an apartment.

Torres-Garcia said the school also provided the children with uniforms and other clothes, including warm coats, and even helped them move into their new home, providing essential housewares, including pots and pans.

But schools like Maria Sanchez Elementary may not be able to receive additional help from Washington, D.C. While Congress finally provided aid for the displaced students, it’s likely the state will have to help school districts with the children who enroll next year.