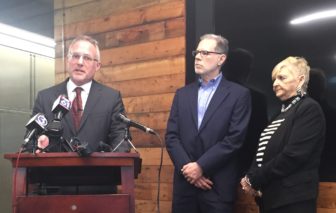 The brother of the man repeatedly abused at the Whiting Forensic Division has filed two lawsuits on his behalf — one against the state and the other against 12 of the forensic nurses and treatment specialists who the suit charges carried out the abuse.

The lawsuits allege that the state employees responsible for the treatment and care of William Shehadi Jr., 59, “a profoundly mentally ill” man, subjected him to “daily mistreatment, degradation, physical assaults, ridicule and other forms of brutal and inhuman psychological, emotional and physical torture” at the maximum-security Whiting Forensic Division of Connecticut Valley Hospital in Middletown.

At a press conference Thursday, Bridgeport attorney Antonio Ponvert III, of Koskoff, Koskoff & Bieder, announced the suits with Shehadi’s brother and co-conservator, Albert Shehadi of Greenwich, and mental health advocate Karen Kangas, the other co-conservator, standing beside him.

“If the measure of a civilization is how it treats its weakest members, the mistreatment and abuse of Bill Shehadi inflicted over a period of months and years by the state employees responsible for his care ranks our state very low,” Ponvert said.

“(Shehadi’s) mental illness is severe and persistent, and it renders him profoundly vulnerable, incapable of protecting himself from harm or even attending to some of his most basic needs and tasks of human survival,” Ponvert said. “The United States Constitution and the Connecticut Bill of Rights require the state to provide to Bill Shehadi and to all other institutionalized individuals humane and dignified treatment, adequate medical and mental health care and freedom from harm.”

It says hours of abuse captured on videotape show hospital workers kicking, hitting and poking Shehadi as he cried and cowered on his bed or on the floor in his room.

The suits contain a litany of accusations of varying severity. In one example, they say Lance Camby, a treatment specialist who was arrested, threw food at Shehadi, spit food on his shirt, bed and pants, which Shehadi then ate, and that Mark Cusson, a Whiting forensic nurse, who also was arrested, repeatedly kicked Shehadi for two minutes, while he was laying on his bed.

In September and October 2017, ten staff members were arrested after a state police investigation. All 10 have since pleaded not guilty to various charges. A total of 37 staff members were placed on paid administrative leave. As of Wednesday, 36 of the 37 had “separated from state service,” according to the state Department of Mental Health and Addiction Services, which oversees Whiting.

During the press conference, Ponvert said evidence shows that Shehadi was abused for more than a decade. The suit describes letters Shehadi wrote to two Whiting doctors in 2006 and 2008 saying he was being abused.

The state lawsuit, which was served on the state attorney general’s office, names the state of Connecticut, the state Department of Mental Health and Addiction Services, as well as DMHAS Commissioner Miriam Delphin-Rittmon, and 11 Whiting administrators and supervisory level employees. The suit seeks monetary damages and injunctive relief.

On Thursday, a spokeswoman for the attorney general’s office said they were reviewing the filing but declined to comment further.

The second lawsuit, filed in U.S. District Court, sues the forensic nurses and treatment specialists accused of abuse or of not reporting it. That suit alleges violations of the U.S. Constitution and the Patients’ Bill of Rights, and also asserts claims for assault and battery and intentional infliction of emotional distress.

Cusson and Camby were named as defendants in the federal lawsuit, as were Michael Presnick, a forensic nurse; and Carl Benjamin, Willie Bethea, Clayton Davis, Greg Giantonio, Bruce Holt, Robert Larned, Robert Martineau, Patrick O’Brien and Seth Quider, all forensic treatment specialists. All were arrested except Martineau and O’Brien, according to state records. DHMAS said none of the defendants worked for the agency any more.

According to the federal suit, following the initial report of abuse and subsequent investigation, DMHAS determined that all of the defendants except O’Brien had violated “DMHAS General Work Rule 19,” which prohibits “physical violence, verbal abuse, inappropriate and indecent conduct and behavior that endangers the safety and welfare or persons or property.”

DMHAS found that O’Brien had violated “General Rule 21,” which says that employees must immediately report alleged violations of work rules, policies, procedures or regulations to a supervisor, according to the suit.

Shehadi was born on Aug. 22, 1958, in Bronxville, N.Y. Since early childhood, he has had a history of treatment and hospitalizations for psychiatric illnesses and behavioral problems, according to the lawsuit against the state.

In 1995, he was acquitted of criminal charges because of his severe mental illness after he killed his father. He has been involuntarily committed to state custody ever since, and is now at Connecticut Valley Hospital.

His symptoms continue to include psychosis, paranoid and delusional thinking, self-injurious behaviors, chronic anxiety, profound insomnia, and various repetitive behaviors, including pacing and tapping. His speech is difficult to understand because of dysarthria, a speech disorder caused by muscle weakness, according to the lawsuit.

He needs assistance from caregivers with many activities, including eating, drinking showering, shaving, dressing and cleaning his laundry. For years, his treatment plan has required 24/7 supervision by two staff members to ensure his safety and wellbeing, the suit said.