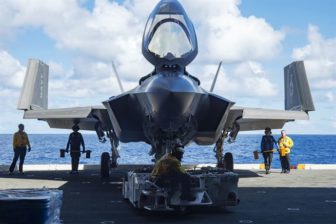 An F-35C, the carrier version of the joint strike fighter.

Washington – Connecticut’s defense industry would be a likely loser if President Donald Trump moves forward with his intention to raise tariffs on imported aluminum and steel.

It’s not so much that the state’s large defense contractors are dependent on these imported metals – although CNN says the United Kingdom is the only source of a specialty steel used in U.S. submarine production. But Connecticut subcontractors to these defense giants could see the cost of raw materials increase.

Potentially more harmful to General Dynamics and Lockheed Martin, the parent companies of Electric Boat and Sikorsky respectively, and to Pratt & Whitney is the threat of retaliation from U.S. allies and other overseas customers of the companies’ military and commercial helicopters, airplanes and engines.

United Technologies and General Dynamics declined to comment for this story, and Lockheed Martin did not respond to requests for comment. But Remy Nathan, vice president of international affairs at the Aerospace Industries Association, said, “It’s not good.”

“We see more national security and economic security problems for our industry,” he said.

“The Department of Defense continues to be concerned about the negative impact on our key allies regarding the recommended options,” the memo said.

It said “targeted tariffs are more preferable than a global quota or global tariff.”

The Commerce Department has cited Section 232 of the 1962 Trade Expansion Act in making its recommendation for tariffs. Administration officials say dumping of cheap steel and aluminum by China and other countries puts U.S. competitors out of business, risking national security.

Meanwhile, the president has indicated he is willing to make exceptions.

“Canada is a very significant partner that buys steel and sells steel. To the extent that we’re successful in renegotiating NAFTA, those tariffs won’t apply to Mexico and Canada. But we look forward to the president releasing the specific details and working with other people,” Treasury Secretary Steve Mnuchin told a congressional panel on Tuesday.

After the president announced his plans last Thursday, the stocks of some defense contractors, including Lockheed Marin and General Dynamics, fell even more sharply than those of automakers – considered a big loser under the proposed new tariff policy.

Nathan of the Aerospace Industries Association said the entire aerospace and defense industry produces $86 billion a year in net exports, and those are threatened by Trump’s plans to increase the cost of imported steel and aluminum.

Commercial sales are the most vulnerable to retaliation, Nathan said, because foreign governments may continue to buy F-35s and other U.S. weapons systems if they think they are the best for defense. But the commercial side of Pratt & Whitney, Lockheed Martin and General Dynamics would be likely to be hurt, Nathan said.

“And if you raise the cost on the commercial side, that is going to affect their ability to do defense work,” he said.

Meanwhile, congressional Republicans are pressing Trump to soften his approach on tariffs.

The Trade Partnership, a non-partisan pro-trade group, released a report Monday predicting that there will be a net loss of 146,000 U.S. jobs if the proposed tariffs on aluminum and steel are applied on imports from all countries.

A Quinnipiac University poll released Tuesday found that American voters oppose new tariffs on steel and aluminum by a margin of  50 to 31 percent and disagree 64 to 28 percent with Trump’s claim that a trade war would be good for the United States and easily won.