Infosys, an India-based information technology company undergoing a major expansion in the U.S., named Hartford on Wednesday as one of its new technology-and-innovation hubs, promising an estimated 1,000 new jobs to a city struggling to broaden its employment base and a morale boost to a state intent on drawing a share of the next generation of technology jobs.

The announcement by Infosys was an unalloyed nugget of good economic news for Connecticut, which has struggled to regain the jobs lost in the Great Recession of 2008, even as its economy enjoyed a recent burst of growth in its domestic product, ranking among the top performing states in third-quarter GDP statistics released in January.

It came with an intriguing back story of networking and cooperation among many of the state’s business leaders, including a hospital CEO who has clashed with Gov. Dannel P. Malloy, and a timely introduction by one Democratic gubernatorial contender, Ned Lamont, that is likely to produce political dividends for another, Hartford Mayor Luke Bronin.

One twist no doubt enjoyed by Malloy is that one of Infosys’ major customers in Connecticut is Aetna. The health insurer’s chief executive, Mark D. Bertolini, snubbed the state and its governor last year by announcing plans to shift headquarters from Hartford to Manhattan to improve its appeal to young, tech-savvy workers. The move since has been scrubbed.

“This investment will be recognized on a national basis as a further step in repositioning Connecticut in the marketplace of the future,” Malloy said. “And this opportunity to train tomorrow’s workforce today in Connecticut is what this announcement is all about.”

Infosys, a global provider of information-technology and training services, is in the midst of shifting much of its training from India to the U.S., where it is planning to open four or five hubs. The initiative was announced last May, with a plan to hire 10,000 U.S. workers. Worldwide, the company employs 200,000.

Ravi Kumar, the New York-based president and deputy chief operating officer of Infosys, said Connecticut made an unusual pitch to him, one heavy on salesmanship from the corporate sector. A working group quickly assembled, organized by the Catherine Smith, the state economic development commissioner, but staffed by public- and private-sector executives.

“It was amazing,” Kumar said.

The Indian-American chief executive of PepsiCo., Indra Nooyi, played the role of match maker. She is a mutual friend of Lamont and Kumar. Lamont put Kumar in touch with Smith and played a role, along with an ad hoc working group of other business executives and Bronin, in selling Kumar on Hartford through a series of meetings with other corporations — all potential clients for Infosys. 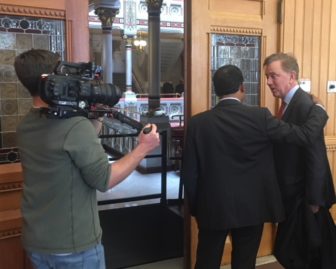 Lamont’s decision to run for governor complicated his involvement, say those involved in the effort. Lamont was in the audience Wednesday, but played no official role. But Kumar warmly greeted him after the news conference, an interaction captured by a videographer hired by the Lamont campaign.

Bronin and Lamont are potential rivals, but the Hartford mayor, an active player in the long recruiting campaign, seemed unbothered by Lamont’s role.

“This is a huge day for Hartford and for the state of Connecticut,” Bronin said. “Not only is a global leader in I.T. and innovation making the city of Hartford one of their innovation hubs, they’re committing to a significant number of jobs and are also committing to educational institutions around here.”

The company has not publicly identified a local site in Hartford. If it produces 1,000 jobs by 2022, it will be eligible for up to $12 million in grants, as well as $2 million in training funds for establishing partnerships with local education institutions. It could receive additional incentives for exceeding the initial hiring goals. Infosys will invest $20 million.

Indiana, where Infosys opened a hub earlier this month with 250 employees, has been promised up to $31 million in tax credits for producing up to 2,000 jobs, according to the Indianapolis Star. A design hub announced last fall in Rhode Island could earn the company $10 million in state incentives for 500 jobs, Rhode Island Public Radio reported.

The Hartford announcement was applauded by Joseph Brennan, the president of the Connecticut Business and Industry Association, and by a frequent critic of the administration, Senate Republican leader Len Fasano of North Haven.

“I think it’s hugely significant,” Brennan said later. “The world really is changing very rapidly, and having an institution like this choose Hartford as one of their four hubs is a huge deal.”

But Kumar said he was impressed by the depth and variety of businesses based in the state, as well as an education system capable of providing Infosys with the raw talent his company could refine in what he calls its finishing school, training that runs from two to three months.

Kumar said he was struck by what, at least in the courtship of his company, was a seamless partnership between state government and the private sector. At times, Kumar said, he confused Cantor Coburn with the Department of Economic and Community Development. Michael Cantor, whose firm specializes in patent and intellectual-property law, was a frequent host for the working group. Cantor is chairman of the board of Connecticut Innovations, a quasi-public agency that promotes economic development.

Cigna, Hartford Healthcare and Stanley Black & Decker were among the corporations whose chief executives and chief technology officials took the time to convince Kumar that Connecticut was home to insurers, health companies and advanced manufacturers hungry for the services Infosys could provide.

Ellliot Joseph, the Hartford HealthCare chief executive who has clashed with the Malloy administration over tax policy, was one of the executives who joined Malloy at a press conference welcoming Kumar. Another was Mark Boxer, the senior vice president and global chief information officer of Cigna.

Boxer was effusive in his praise of Infosys and the role it could play in Connecticut with its expertise in artificial intelligence, cloud-based computing, analytics, digital tools and automation. 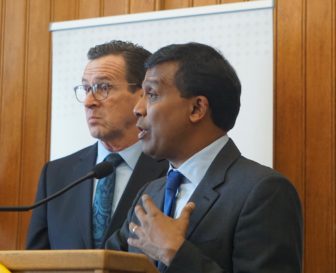 “Each of these emerging technologies, we believe, are going to play a key role improving the quality, the access to care and the patient experience within the ecosystem” of health care, Boxer said.

Malloy was diplomatic when asked about the arrival of Infosys after GE’s headquarters departed for Boston, seeking greater tech talent, and Aetna’s was poised to do the same until it was acquired by CVS. He said the digital revolution touches every industry and every company, and Infosys is reinforcing the administration’s position that Connecticut will play a role.

“Digital is going to sweep every company,” Malloy said. “It’s going to change how we live, how we do business. And with this important investment, this company and educational institution in our midst, we have just taken a gigantic step forward in being able to attract the skillset others perhaps wrongly thought could only be accessed elsewhere.”

Kumar declined to comment on his customer Aetna’s views on Connecticut as a place to do business.

“All I can say is the business is here,” Kumar said. “The talent is here.”