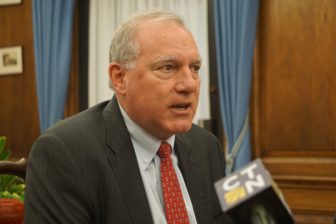 Attorney General George Jepsen advised legislators Thursday that the state could take a tentative step toward testing the market for opening Connecticut to commercial casinos without immediately jeopardizing $260 million in slots revenue the state expects to collect this year under an exclusivity deal with the tribal owners of Foxwoods Resort Casino and the Mohegan Sun.

Jepsen submitted written testimony on several gaming bills before the legislature’s Public Safety and Security Committee, including a measure sought by MGM Resorts International that would repeal a 2017 law granting exclusive rights to the two tribes to jointly develop a casino in East Windsor. Instead, the bill would authorize an initial step toward an open competition for casino expansion.

The bill before the public safety committee, which has jurisdiction over gambling legislation, would create a multi-step process toward allowing a casino outside the exclusivity deal that has produced about $7 billion for Connecticut over the past quarter century. No casino license could be granted without further legislation, presumably no sooner than 2019.

But passage would be a victory for MGM Resorts, the Nevada-based gaming giant locked in the third year of a bitter and expensive lobbying battle to protect the market of MGM Springfield, the resort under construction just over the state line. MGM is using the prospects of a future casino in Bridgeport to build support for repealing the East Windsor authorization now.

It is fighting here and in Washington to block construction of the East Windsor casino, now planned by a joint venture of the Mashantucket Pequot and Mohegan tribes for a hillside overlooking I-91, roughly halfway between Hartford and Springfield. The facility was proposed by the tribes to blunt the loss of market share to MGM, not expand gaming revenues to Connecticut.

Sen. Steve Cassano, D-Manchester, said during the opening hour of what was expected to be an all-day public hearing that there is no reason to repeal the East Windsor authorization, even if the legislature decides to test the interest in casino expansion in Bridgeport with a request for proposals next year.

“I am astounded that in order to do that we’re going to kill another casino. We don’t have to kill this casino to move forward in Bridgeport or somewhere else,” Cassano said. “What’s wrong with us? Let’s get our act together.”

Rep. Christopher Davis, R-Ellington, whose district includes a portion of East Windsor, said MGM’s push for the legislation has nothing to do with Bridgeport.

“It’s to stop the casino in East Windsor,” he said.

Rep. Kevin Skulczyck, R-Griswold, whose district is home to many tribal casino employees, said the committee was being played by MGM, and he pointed to the buses that have brought Bridgeport residents to testify in support of its bill.

Rep. Jeffrey J. Berger, D-Waterbury, one of the backers of the MGM bill, objected to Skulczcyck’s remarks.

“I take exception to the representative stating that MGM has bought this bill,” Berger said.

Jepsen also offered testimony Thursday on the legal risks in two other gaming bills: One allowing sports betting, should the U.S. Supreme Court strike down current federal restrictions; the other allowing the Connecticut Lottery to conduct an online lottery.

The attorney general’s office has been an unusually influential voice in all gaming issues, a consequence of exclusivity deals struck in the early 1990s by Gov. Lowell P. Weicker Jr. that have greatly complicated nearly every subsequent proposal to expand gambling, ranging from lottery games to Keno.

After the legislature rebuffed his efforts to block the tribal casinos, Weicker made a tactical retreat with agreements that gave the tribes exclusive rights to casino gaming in return for a 25 percent share of gross slots revenue. The deals not only produced a financial windfall for the state, they raised a firewall against new gaming.

A difficult challenge for any commercial casino owner wanting to expand into Connecticut, an attractive market given its proximity to New York City, was convincing the state it could do better with a resort in southern Connecticut than it was getting from the tribes. Donald J. Trump and Steve Wynn each failed to make the case.

But new competition in New York, Rhode Island and Massachusetts has reduced the value of Connecticut’s deal with the tribes: From a high of $430 million in 2007, the annual slots revenue to the state has fallen below $270 million and is projected to shrink further, possibly below $200 million.

MGM is arguing that a major resort in Bridgeport, where it has a deal with a local property owner for a waterfront parcel, not only could produce more revenue than it is getting from the tribes, but generate thousands of jobs and local taxes for the state’s largest city.

At Jepsen’s suggestion, the East Windsor law included a provision making authorization contingent on the Interior Department accepting amendments to Connecticut’s gaming agreements with the tribes before construction can begin. The provision was meant to guarantee the slots revenue would continue.

Interior Secretary Ryan Zinke has refused to act on the amendments, indefinitely stalling construction. The tribes and Connecticut are suing Zinke over his inaction.