Back after seizure, Boughton tells GOP, ‘It’s all good now’ 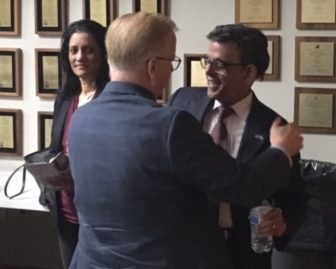 Mark Boughton thanks an opponent, Prasad Srinivasan, for aid rendered after his seizure last week.

West Hartford — With touches of humor and humility, Danbury Mayor Mark Boughton resumed campaigning for governor Monday night, telling Republicans he was ready for the rigors of a statewide campaign after suffering a seizure Thursday night. His audience included four GOP rivals, one of them a physician who tended to him after his collapse.

Boughton embraced his fellow candidate, Rep. Prasad Srinivasan of Glastonbury, an allergist and one of three doctors who aided the mayor after he collapsed in Avon. Boughton quietly thanked Srinivasan before the start of a Republican Town Committee meeting here, then posed for a picture by Srinivasan’s wife.

“I’m glad to be here,” said Boughton, who arrived with a bottle of water, a nod to his blaming his seizure on severe dehydration, not a complication of his surgery last summer to remove a large cyst from his brain. “I’m glad to be in an upright position.”

Boughton spoke for about eight minutes to the town committee, using most of the time to talk about his nine victories running for mayor in Danbury, overcoming a Democratic voter-registration advantage of more than 3 to 1. He closed by addressing his seizure, offering no new information about a dramatic episode his campaign initially tried to downplay.

“Look, It’s no secret last Thursday night I had a little bit of an issue. It’s all good now,” Boughton said.

“Thank you, I feel good,” Boughton said. “It can be a scary thing, and it can give you pause. And some times it makes you revaluate what you’re doing and whether you want to do something. Let me be very frank: I’m here tonight to double down on this state. This is my home. This is where I was born.” 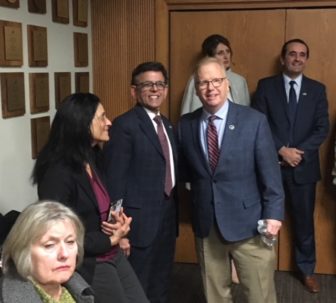 Boughton quoted his mother as saying anything worthwhile takes work and sacrifice.

“…to make sure that this state is on the right course.”

The town committee meeting here — a one-hour drive from Danbury — was his only stop Monday. Waiting to address the committee after Boughton were four other GOP gubernatorial contenders: Srinivasan, Shelton Mayor Mark Lauretti, Peter Lumaj  of Fairfield and Sen. Toni Boucher of Wilton.

His encounter with Srinivasan was the first since Thursday.

His exchange with Srinivasan was warm. He grasped Srinivasan by the shoulders, then leaned in to say something not audible to onlookers. Srinivasan said Boughton told him, “I’ll be forever indebted to you.”

But Srinivasan soon showed he deeply resented suggestions that he had exaggerated Boughton’s condition Thursday night. In interviews with CT Mirror and The Courant, Boughton said he did not require the CPR that witnesses described doctors beginning to administer when he turned blue.

Sen. Michael McLachlan of Danbury, a supporter who formerly was Boughton’s chief of staff, suggested to The Courant that Srinivasan was alarmist. McLachlan was not in Avon.

Srinivsan showed his displeasure by describing the precarious fiscal and business health of Connecticut with a series of medical terms.

“The health of our state is in crisis.”

“Our businesses have no life at all, as if that life was being sucked away. Our businesses are dehydrated, and we need to make sure we take care of them.”

“Our pension funds are pulseless. So what do you do? Connecticut needs to be resuscitated. and you know what, I can do that — advanced CPR on our state.”

No one on the town committee asked Srinivasan about the medical imagery. But as he left, Srinivasan said he was taking a jab at McLachlan for suggesting he and the other doctors should not have — or did not — begin CPR

CPR is not recommended for seizure patients, but Srinivasan said he and the two other doctors present were initially unsure if Bougton was in a seizure or suffering from cardiac arrest.

“You’re talking about somebody who has been practicing for 38 years, and I was not alone,” he said. “There were three doctors.”

He described McLachlan as somebody “who was not there and had no idea, who had no medical background.”

Srinivasan said he expressed no resentment toward Boughton.