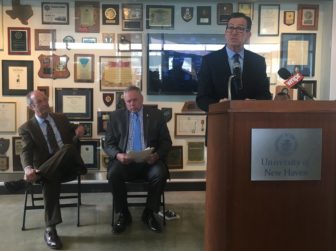 Continuing a years-long fight, Gov. Dannel P. Malloy on Tuesday once again called on Connecticut to expand the jurisdiction of juvenile courts to include offenders aged 18 to 20.

At a press conference at the University of New Haven, Malloy outlined two legislative proposals for tackling criminal justice reform.

The first would create a new category of “young adult” offenders — those 18 to 20 — most of whose cases would be heard within the juvenile justice system. The bill would expand the juvenile courts’ jurisdiction to age 20 by 2021.

“We know that if we can avoid exposing young adults who have committed less serious crimes to the adult criminal justice system, the less likely they are to reoffend or ultimately become incarcerated,” Malloy said.

The governor’s attempt to introduce the legislation for the third consecutive year is still likely to be met by opposition among the legislature’s Republicans.

Critics often argue adjudicating 18- to 20-year-olds in juvenile court excuses them from criminal responsibility, saying 18-year-olds have the right to vote and serve in the military.

Connecticut, along with Massachusetts, Illinois, New Hampshire, Louisiana and South Carolina, raised the upper age of juvenile court jurisdiction from age 16 to 18 between 2009 and 2017, according to the National Conference of State Legislatures.

Malloy’s second proposal deals with young defendants whose cases are serious enough to be transferred to adult court. For them, Malloy would extend the opportunity to qualify for “youthful offender” protections to individuals under the age of 21.

Those protections – allowing public court proceedings but keeping records confidential, limiting incarceration to no more than four years, and erasing police and court records providing the person doesn’t reoffend within four years after sentencing, among other things – is currently afforded to those age 17 and under in adult court.

Youthful offender status is not available to those who commit serious felonies, and qualifying for it would continue to be decided on a case-by-case basis, Malloy said.

Malloy said the two proposals would “truly move the ball forward on … offering our young people who have made mistakes a greater chance at a decent and productive life.”

Connecticut needs to continue to invest in programs, services and communities most impacted by mass incarceration, said Abby Anderson, executive director of the Connecticut Juvenile Justice Alliance, who spoke at the press conference.

“Research shows that the vast majority of children and young adults simply age out of delinquent or criminal behavior,” Anderson said. “Now that doesn’t mean we don’t address that behavior. It means that we address that behavior in ways that ensure and accelerate that aging-out process.”