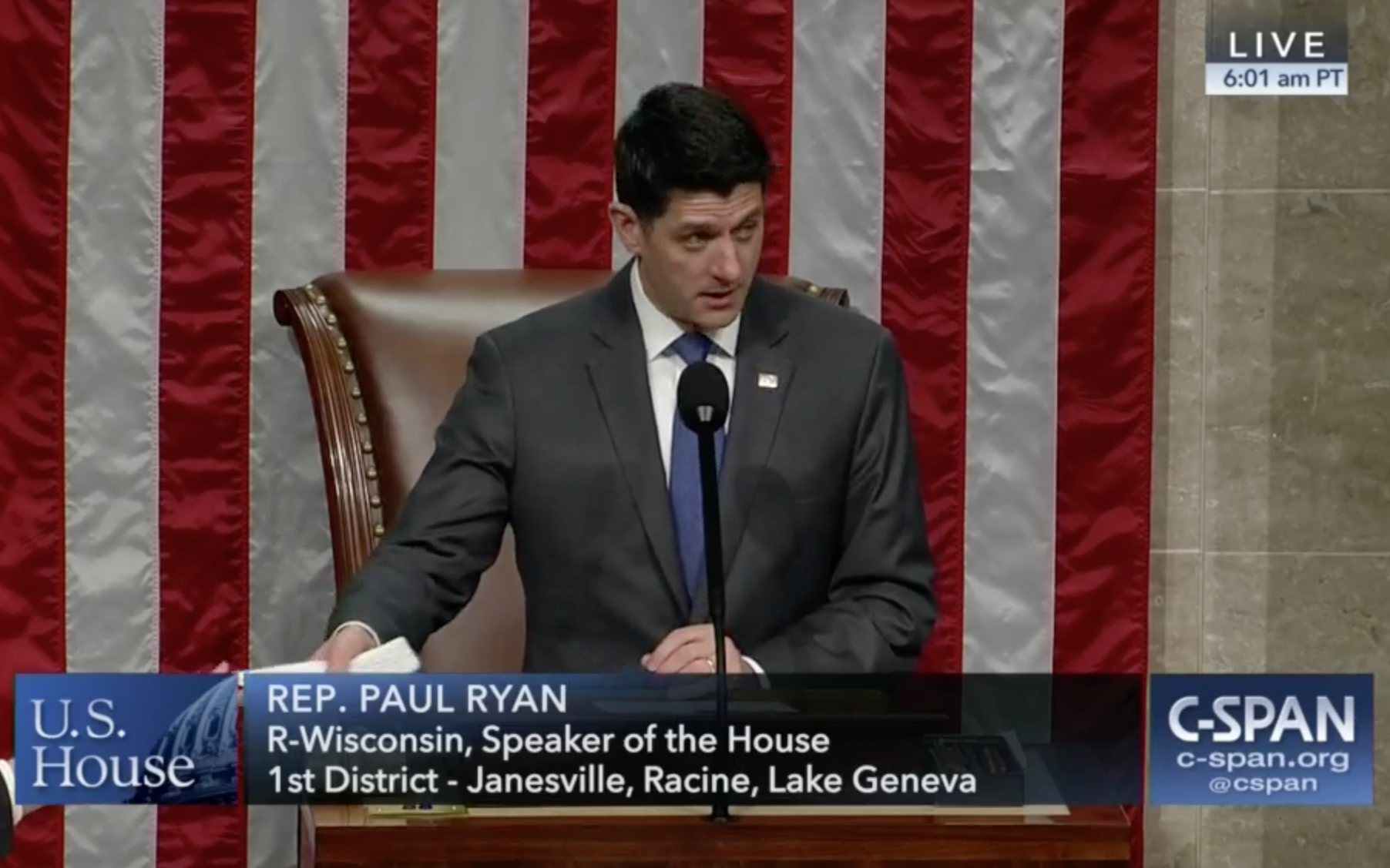 Washington – Connecticut’s entire congressional delegation voted for a massive, $1.3 trillion federal budget bill that will provide the state with millions of additional dollars for education, health care and transportation and boost production in the state’s defense industry.

“This deal is great news for both Connecticut’s defense industry and our overall economy,” said Rep. Joe Courtney, D-2nd District.

“In a time when the Trump Administration is seeking massive cuts in funding, senseless eliminations of critical programs, and the fundamental hollowing out of our federal agencies, we fought to include critical investments in Democratic priorities that boost the middle class,” DeLauro said.

The omnibus spending bill, approved in bipartisan votes —  256-167 in the U.S. House on Thursday and 65-32 early Friday in the Senate — would fund federal agencies until the end of the federal fiscal year, Sept. 30.

It was negotiated by House and Senate Republican and Democratic leaders, but needed the approval of President Donald Trump who declared victories for his priorities in a late Wednesday tweet.

“Got $1.6 Billion to start Wall on Southern Border, rest will be forthcoming. Most importantly, got $700 Billion to rebuild our Military, $716 Billion next year . . . most ever. Had to waste money on Dem giveaways in order to take care of military pay increase and new equipment,” the president said.

Some lawmakers, notably Sen. Rand Paul, R-Ky., complained about having to rush to pass a bill there was little time to read. Paul held up a Senate vote on the omnibus, which required unanimous consent to bypass normal, time-consuming procedures, to make a point about the lack of time given lawmakers to read the massive bill,  which was publicly released late Wednesday.

Even lawmakers who supported the omnibus complained about the process.

“No matter what you think about the bill, this process is something we have to stand up and say is unacceptable,” said Rep. Jim McGovern, D-Mass, before the House vote.

Meanwhile, the conservative House Freedom Caucus opposed the bill over its size, arguing it included too many Democrat-friendly policy provisions.

Because it is a must-pass bill, a number of initiatives were attached. Those included the “Fix NICS” bill sponsored by Sens. Chris Murphy and John Cornyn, R-Texas, that would encourage states and federal agencies to improve their reporting to the National Instant Criminal Background Check System, a database used by the FBI to screen prospective gun buyers.

Another Murphy initiative is also in the omnibus, the Honor Our Commitment Act that requires the Department of Veterans Affairs to provide mental and behavioral health care to veterans who received Other-than-Honorable or Bad Conduct discharges.

“As much attention as Fix NICS got, the Honor Our Commitment Act is arguably much more important,” Murphy said. “That provision is going to save lives immediately because veterans who are sick are going to get care.”

“I’m furious it took so long to get a budget, but the end product is pretty good,” he said. “This is a time when the state budget is hurting, so a plus-up in federal dollars is going to help the state.”

During negotiations over the spending package, a number of proposed GOP initiatives were jettisoned, including one that would have punished so-called “sanctuary” cities that fail to hold immigrant prisoners who have completed their sentences so federal agents can pick them up.

A GOP attempt to repeal the Johnson Amendment, which prevents churches and other nonprofits from directly engaging in electoral activity, also was rebuffed.

Several Democratic priorities also failed to make it in the bill, including providing temporary legal status and a path to citizenship for thousands of immigrant youth, known as “Dreamers,” brought to this country illegally by their parents.

The spending package also fails to fund “cost-sharing reduction” payments to health insurers established by the Affordable Care Act to offset the cost of lowering co-payments and deductibles for low-income people.

“But at first glance it appears to have some positives, including investments in combating the opioid crisis, additional security for our election systems against foreign interference, increased infrastructure investments, and Senator Murphy’s Fix NICS language,” he said. “That said, we remain troubled that Republicans continue to resist critical protections for Dreamers and other important priorities for Connecticut families.”

“We’re boosting resources for training, for equipment, for maintenance, for base operations. This means new naval ships, new fighters, new Apache and Black Hawk helicopters,” said House Speaker Paul Ryan, R-Wis. “What this all adds up to is that we are rebuilding the American military and creating a 21st century fighting force.”

The omnibus provides $1.1 billion for 56 Sikorsky-made Black Hawk helicopters – adding eight choppers to the Pentagon’s request — and $10.2 billion for 90 F-35 fighter jets, whose engines are made by Pratt & Whitney.

Congressional negotiators also approved a little more than $3.3 billion to continue the two-a-year pace of construction of  Virginia-class attack submarine, made by Electric Boat.

The omnibus also included language promoted by Courtney, a member of the House Armed Services Committee, that allowed the Navy to negotiate a contract for the next block of subs that provided for up to 13 Virginia-class boats. That would increase production in the years 2020, 2022 and 2023 to three Virginia-class subs a year.

Money for planning and design of the Columbia-class ballistic-missile subs, which also are constructed by Electric Boat, was also increased slightly, from $842 million the Pentagon had asked for, to $861 million.

Besides the larger order of Black Hawks, Sikorsky will benefit from the omnibus’ increase in the money allocated for the CH53K “King Stallion” heavy-lift helicopter program, from about $568 million the Defense Department had requested to nearly $803 million.

Butter as well as guns

“The omnibus funding bill takes the first step in reinvesting in education funding after years of reckless austerity and prioritizes programs which help our students most in need,” said Lily Eskelsen García, head of the National Education Association.

The bill increases the maximum Pell Grant, which helps many college students pay for their education, by $175 to $6,095.

Money for a number of other federal education programs also was boosted, including the Child Care Development Block Grants that fund the Care4Kids child care subsidy program in Connecticut, which was increased by $2.37 billion for a total of $5.22 billion.

Funding to fight the opioid epidemic was increased by nearly $3 billion, including $1 billion in new grants to states that will be distributed through a formula that is weighted to give more to states that are most severely impacted by the opioid crisis.

Some lawmaker said they were grateful for the extra money, but it is not enough.

“This funding only nibbles at the edge of the problem,” said Rep. Marcy Kaptur, D-Ohio. “This is a national crisis. It must be reflected in a real plan to meet the crisis, including funding priorities. No matter how many fighters or tanks we have, America will not be strong abroad if vast segments of our population are dying here at home.”

The bill also allows for a 12.5 percent hike in Connecticut’s Low-Income Housing Tax Credit, which aims to spur the building and rehabilitation of affordable housing units.

The bill also lifts caps on jurisdictions that apply for federal grants to clean up brownfields, a former industrial or commercial site where future use is affected by real or perceived environmental contamination.

“This is a significant victory for economic revitalization in central and northwestern Connecticut,” Esty said.

Courtney said the increased COPS grant funding is vital to towns like Norwich that use the money to hire more officers. 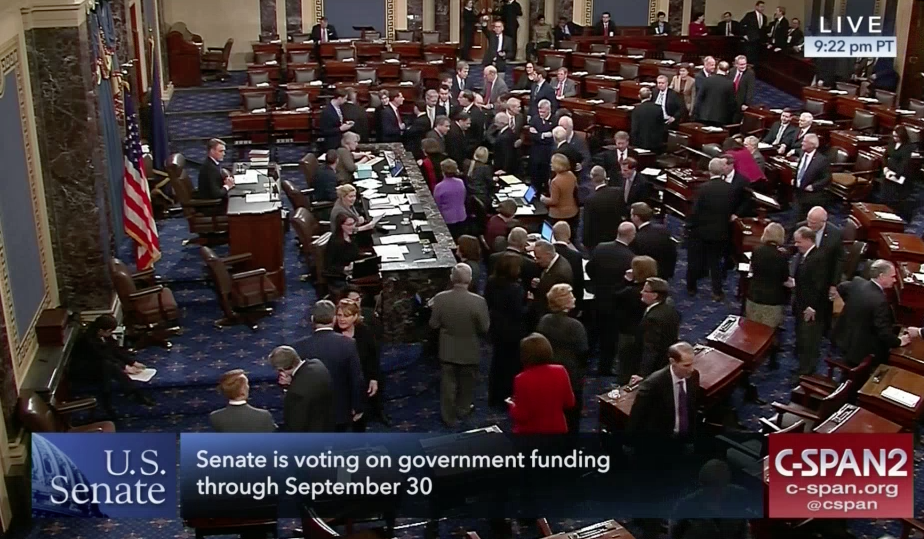 Senators mill about the chamber during the roll call vote on the spending bill.