CT students gear up for ‘March for Our Lives’ in Washington

Wamogo Regional High School senior Kalea Barger said the mass shooting at a Parkland, Fla., high school last month left her shocked and unsure of what to do. But that uncertainty quickly dissipated as she joined the grassroots national student movement demanding an end to gun violence.

Kalea is one of tens of thousands of youth across the nation planning to take part in the “March for Our Lives” in Washington, D.C., on Saturday calling for tighter gun control and a stop to mass school shootings. 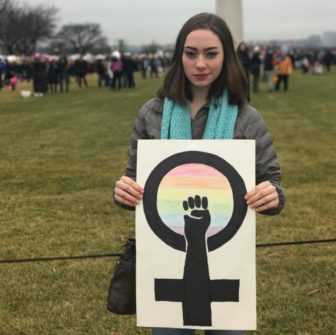 Kalea Barger, a senior at Wamogo Regional High School in Litchfield, at the Women’s March in Washington, D.C., last year.

Students who survived the Feb. 14 shooting that left 17 dead at Marjory Stoneman Douglas High School are spearheading the march. That event will be amplified by more than 800 simultaneous demonstrations around the world.

Kalea, 17, of Morris, said she hopes the marches will force the government to see this as the last straw for people in the United States.

“Most people believe in common-sense gun control, and our political leaders have failed to protect us,” Kalea said. “I’m hoping they will see that we are done watching them ignore us and ignore our cries for help because they are here to serve and protect us.”

Last week youths around the country participated in 17-minute school walkouts bringing the same anti-violence message and honoring those that died in the Florida shooting.

Kaela is among many Connecticut students seeking to make their voices heard by joining the D.C. march.

Tyler Felson, a 17-year-old senior at Guilford High School, said being friends with Cameron Kasky, the junior from Stoneman Douglas who ignited the movement, led him to become involved.

Cameron, along with Parkland teens Emma González, Alex Wind, David Hogg and Jaclyn Corin, was featured on the latest cover of TIME magazine.

“I think this has resonated with me because as a teenager you can’t say the thought hasn’t crossed your mind,” Tyler said. “Like it could happen to us and I think that’s what has gotten a lot of kids in our town impassioned.”

A national Quinnipiac University poll released Thursday found a large majority of American voters — 63 to 31 percent — approve of the marches in support of stricter gun laws, but by almost the same margin — 62 to 31 percent — do not believe they will be effective in passing new legislation.

The poll also found 61 percent of voters believe President Donald Trump must do more to reduce gun violence, and 68 percent said Congress had that same responsibility.

O’Callahan said he is trying to be realistic about the outcome of the march and knows it probably won’t catalyze an assault weapons ban. The 18-year-old supports increasing the age to buy a firearm to 21, strengthening background checks and banning bump stocks and ghost guns.

Bump stocks are devices that allow semiautomatic rifles to fire at a rate similar to machine guns, and ghost guns are untraceable weapons assembled from kits and parts ordered online.

Connecticut banned the purchase of assault weapons after 20 first-graders and six educators were massacred at Sandy Hook elementary school in 2012, fueling calls for tighter gun laws.

The national student action and sustained pressure for reform is unlike responses to tragedies before the Parkland shooting, O’Callahan said.

“It’s not just thoughts and prayers. It seems like something bigger is going to happen … there are enough kids that have been empowered who will do everything they can to continue advocating for increased gun control,” O’Callahan said.