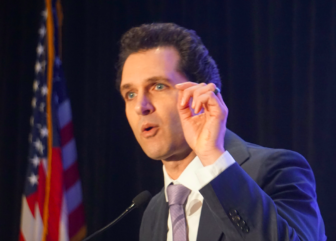 Michael D’Agostino at the AFL-CIO convention

Two weeks after winning a straw poll at a Connecticut AFL-CIO  political convention, state Rep. Michael D’Agostino, D-Hamden, ended his exploratory campaign for attorney general Friday. He instead will seek a fourth term in the House of Representatives.

His decision reflects the difficulties in quickly launching a statewide campaign for the first time, even when the candidate is backed by an influential progressive group, the labor-backed Working Families Party. Connecticut is a state with a hybrid system of nominating candidates, mixing insider politics with a relatively open primary.

The easiest route to qualifying for the primary is to win at least 15 percent of the votes at a statewide nominating convention, a task that requires nightly trips across the state to meet and cajole town-committee members and other activists who tend to end up as delegates to the nominating convention in May.

“I like the process. I really enjoyed the process,” D’Agostino said. “You just need more than three or four months to do it.”

D’Agostino, a commercial litigator who became a visible defender of protecting collective bargaining for public-sector employees, was encouraged by progressives to explore a statewide campaign after Attorney General George Jepsen’s surprise announcement on Nov. 27 that he would not seek a third term.

He was the legislator chosen by House Democratic leaders to defend a concessions deal with state employees that is projected to save $1.57 billion over two years, but at the cost of the state extending its basic labor agreement for 10 years, until 2027. Republicans complained the agreement still maintains an expensive benefits system and restricts the ability to lay off workers until 2021.

“I wanted to make sure the story of labor and collective bargaining, that somebody was talking about that on a statewide basis,” D’Agostino said. “It’s an important part of our message in the fall.”

Labor delegates rewarded him two weeks ago. At the AFL-CIO convention, he won a five-way straw poll for attorney general with 47.7 percent, followed by Chris Mattei at 24.8 percent; state Rep. William Tong, D-Stamford, at 11.4 percent; and Assistant Attorney General Clare Kindall at 7.4 percent. State Sen. Paul Doyle, D-Wethersfield, one of three Democrats in the Senate to support a GOP-crafted budget, got no votes.

But D’Agostino lacked the statewide infrastructure enjoyed by two rivals: Tong, who had briefly run for U.S. Senate in 2012, and Mattei, a former federal prosecutor who had campaigned statewide for seven months as a potential gubernatorial candidate before declaring for attorney general.

“What I learned is you really do need a good six months lead time. We were running and setting up the infrastructure at the same time,” D’Agostino said.

D’Agostino also faced a professional conflict: One of his legal cases is going to trial in Philadelphia at the end of May.

D’Agostino, who said he enjoys being a House member, said he had no regrets about his exploration for attorney general — or his decision not to go forward.

Lindsay Farrell, the executive director of the Working Families Party, said she respected his decision, but added, “I think he would have won.”