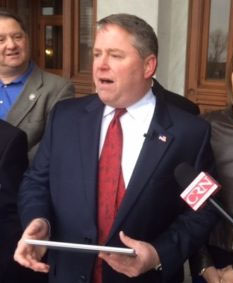 Washington – An open congressional seat is usually a rarity, drawing interest from a variety of candidates and often national attention, but the contest for Connecticut’s 5th District seat is not playing out that way — at least not yet.

With less than seven months until November’s general election, and party nominating conventions just weeks away, the list of those saying they are not interested in running to replace Rep. Elizabeth Esty, who is not seeking re-election,  is growing.

On Wednesday, former state Rep. Dan Carter, R-Bethel, and William A. Petit Jr., a Republican state legislator from Plainville, were the latest to say they are not interested in running. Carter unsuccessfully challenged U.S. Sen. Richard Blumenthal for his seat in 2016.

“At the end of the day, it just came down to ‘It’s just not a good time for my family,’” Carter said. “It wasn’t the right time.”

The state political parties as well as national organizations like the Democratic Congressional Campaign Committee and the Republican National Congressional Committee have been trying to recruit the best candidates to run in a district that’s considered the state’s most competitive.

But as of now, only former Meriden Mayor Manny Santos, a Republican who entered the race before Esty bowed out, and former Simsbury selectman Mary Glassman, a Democrat, are officially candidates.

John Pistone, who calls himself a “2018 Christian Conservative Candidate,” also said he is running as a Republican in the race, but has not yet filed a statement of candidacy with the Federal Elections Commission.

In contrast, the last time there was an open 5th District seat six years ago, there were eight declared candidates before the party conventions.

Besides Carter and Petit, the list of candidates who’ve rejected a run include New Britain Mayor Erin Stewart, who said she’s committed to run for governor; State Sen. Kevin Witkos, R-Canton; State Sen. Eric Berthel, R-Watertown, and Mark Greenberg, a Republican who has run for the seat before but says he prefers to continue in his race for state comptroller instead.

Nicole Hockley and Mark Barden, co-founders of Sandy Hook Promise who’ve each lost a child li the Newtown shooting, have been urged to run by the DCCC, but have not made up their minds.

When asked Wednesday if she had made a decision, Hockley answered “not yet, thanks.”

Hockley, Barden or some other hopeful may still enter the race, but time is getting short, especially when it comes to raising campaign cash.

The average House candidate spent $1.3 million in the last campaign cycle, with those running for an open seat spending considerable more.