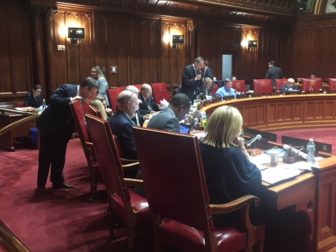 Sen. Paul Doyle presenting the bill to the Senate.

The Senate voted 31-5 early Friday to approve and send to the House a bill that overhauls Connecticut’s sexual harassment and assault laws and gives lawmakers an election-year claim of solidarity with the Time’s Up and Me Too movements.

The bill would eliminate the statute of limitations for prosecuting many serious sexual assaults, bringing Connecticut in line with most other states, and impose new training standards to address sexual harassment in the workplace.

The measure is less ambitious than a concept outlined by Democrats in February.

A prohibition on the use of nondisclosure agreements that have long silenced victims and protected predators was rejected months ago. The time to file complaints to the Commission on Human Rights and Opportunities was changed from six months to a year, not the three years originally sought by sponsors.

Sen. John Kissel, R-Enfield, said the amended legislation was not sufficiently vetted for its impact on businesses, and he objected to combining new rules to combat sexual harassment with changes to criminal laws regarding sexual assault.

“I think it’s confusing to people,” he said.

Republicans tried to amend the bill to exempt employers with fewer than 25 employees. They also would have limited damages that could be imposed on employers.

“There needs to be a balance in these situations,” said Senate Republican leader Len Fasano of North Haven.

Sen. Mae Flexer, D-Killingly, said the GOP amendment would have weakened current laws, as well as the proposed bill. The amendment failed on an 18-18 party-line vote.

Passage of the bill came at 4:37 a.m. after a three-hour debate.

Five men voted against the bill: Republicans Kissel, Tony Guglielmo of Stafford, Joe Markley of Southington and Michael McLachlan of Danbury and Democrat Edwin A. Gomes of Bridgeport.