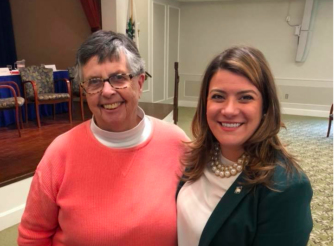 Eunice S. Groark, the first woman in Connecticut to become lieutenant governor, bolting the Republican Party in 1990 with Lowell P. Weicker Jr. to win election as members of the breakaway A Connecticut Party, died Tuesday at the Duncaster retirement community in Bloomfield. She was 80.

Groark played a dramatic role in passage of the state’s first broad-based income tax, casting a tie-breaking vote in the Senate at 3 a.m. in August 1991, helping end a budget battle in which Weicker vetoed three budgets. She also broke a tie in favor of the state’s first law restricting the sale and ownership of assault weapons.

Weicker, a lifelong Republican who lost his U.S. Senate seat in 1988, recruited Groark as his running mate after deciding to run for governor as an independent, defeating Republican John G. Rowland and Democrat Bruce Morrison in 1990. Weicker and Groark became political partners in an administration that took office with no allies and no roadmap.

“She was just a great gal and a great political companion,” Weicker said Wednesday in a telephone interview. “I’m broken-hearted.”

Groark was a member of the GOP establishment, a descendant of Hartford’s founder, Thomas Hooker, and the wife of a prominent attorney, Thomas Groark Jr.

Eunice Groark had been a Hartford City Council member, holding one of the three seats on the nine-member council set aside by law for the minority party. She also served as Hartford’s corporation counsel when she made a short list of two finalists considered by Weicker.

“It was from the beginning a very fast friendship,” Weicker said.

Peter Gold was the Weicker staffer sent to recruit her to the ticket, meeting at her home in Hartford’s West End.

“We sat on her back porch as she weighed her decision,” Gold said.

They talked about her life in Hartford, including an unhappy brush with history: She was in the audience at the Ringling Bros. and Barnum & Bailey Circus in 1944 when the great tent caught fire in the city’s North End, killing 167.

When Weicker did not seek a second term as governor, Groark ran on the A Connecticut Party line in 1994, losing to Rowland. Her association with Weicker and the income tax made for an uphill race.

“In her campaign, she could have distanced herself from Gov. Weicker, as some advised her,” The Hartford Courant said in an endorsement. “But she stood up for her convictions. Why dance around the fact that she was an important part of the Weicker administration for four years? Why not tout its accomplishments?”

The paper praised her as possessing Weicker’s resolve, but not his combative personality.

“She is not given to bluster. Her ways are mediation and conciliation, which she used well in her role as the administration’s eyes and ears in the Legislature,” the paper said. “When the Senate deadlocked over tax reform and banning assault rifles, Mrs. Groark did not hesitate to break the tie. She showed exemplary leadership. Even those Weicker haters who are tempted to take their revenge by voting against Mrs. Groark should appreciate her willingness to stand up for her beliefs and not to embrace politically convenient positions during an election campaign.”

“Eunice Groark holds an important place in Connecticut history as a woman, a state leader, and an advocate who didn’t shy away from tough decisions and fought for what she believed in. She was a strong and talented leader, one who helped shape Connecticut and set the foundation for work we are doing today to support our cities, invest in infrastructure, and forge stronger partnerships with business and industry. We are fortunate to have had her leadership and her vision.”

Wyman, the third woman to be elected lieutenant governor in Connecticut, was a state legislator during Groark’s four years at the State Capitol.

U.S. Rep. John B. Larson, D-1st District, who was the Senate state leader during Groark’s tenure, said she served with “class and grace.”

“She served with distinction and enormous integrity,” Larson said. “She had a wonderful sense of humor and was a decent, caring person; the kind of person you would want in public service. She will be dearly missed.”

Groark was active in the Duncaster community, recently helping arrange a panel discussion about women in politics with New Britain Mayor Erin Stewart, who is seeking the GOP nomination for governor, and others.

“The community is stunned,” said David E.A. Carson, the former president of People’s United Bank. He is a Duncaster resident and long-time friend of Groark, who served on People’s board of directors.

Groark collapsed Tuesday, friends said. Groark and her husband moved to Duncaster three years ago after he was diagnosed with Alzheimer’s, Carson said.

“She went every afternoon,” he said.

Eunice and Tom Groark met on their first day of class at UConn Law, and they married at the end of their second year. They were married for 54 years.

Groark was born in Sharon and raised in Hartford. Her father, Henry Barnard Strong, was a state legislator. She was a graduate of Bryn Mawr College and the University of Connecticut Law School.

In addition to her husband, she is  survived by her daughters, Eunice Groark of Wellesley, Mass.; Marie Groark of Seattle; and Virginia  Groark of Chicago; and seven grandchildren.

Calling hours will be held on Friday from 3 to 7 p.m. at the James T. Pratt Funeral Service at the D’Esopo Funeral Chapel, 277 Folly Brook Blvd., Wethersfield. The funeral will be Saturday at 10 a.m. at Old St. Andrew’s Church, 59 Tariffville Rd., Bloomfield.