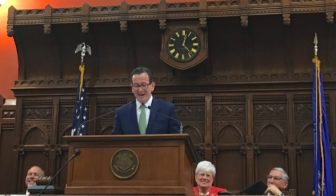 With a self-deprecating humor, Gov. Dannel P. Malloy addressed a joint convention of the General Assembly for the last time early Thursday, celebrating accomplishments of the past eight years and wryly acknowledging that he will leave politics as one of the least popular governors in the U.S.

Malloy, 62, the first Democrat to win the governor’s office in a generation, entered the House of Representatives to applause shortly after the legislature’s constitutional adjournment of midnight Wednesday to deliver a 12-minute speech that was less a formal farewell than a nod to a shared history of cooperation and combat.

A thin smile on his lips, Malloy urged the lawmakers to sit and get comfortable. “Tonight, I’m going to spend the next several hours airing the grievances with you that I’ve not been able to get in over the last eight years,” Malloy said.

The legislators laughed at the notion that the governor ever had held back criticism of the legislature.

Malloy paused, waiting for the laughter to subside.

“I’m just so happy I was able to bring you all together to get a bipartisan budget done two years in a row,” he said.

They laughed a little harder.

“Let me say this, I’ve had strong working relationships and friendships with a number of people in this hall on both sides of the aisle,” Malloy said. “For those of you who don’t fall into that category, I look forward to coming to your districts and campaigning for you.”

He waited again. The laughter was halting for a moment, then turned raucous as they realized that a governor who rarely conceded weakness in dealings with the legislature over eight tumultuous years was referring to his own unpopularity, that his ultimate threat would be to offer his endorsement.

He finally turned serious, at least for a few minutes.

“For tonight, I will say that I commend you on working together once again,” he said. “Bipartisanship is something to be celebrated.”

Malloy reminded them that the average growth rate of the budget has been at its lowest under him, and that two labor concession agreements have made structural changes in the state pension system, saving billions over the coming decades.

He told them the executive branch is now 13 percent smaller than it was eight years years ago, and is at its lowest staffing level since 1975, when he was a sophomore in college. He noted the Rainy Day Fund will reach $1 billion next year, but left unmentioned the projected deficits over the horizon.

“When we first gathered in this chamber a few short months ago, many of us said we would fight for pay equity, and together this session we created new laws that will help ensure equal pay for equal work,” he said.

While progressives chafed in recent days as it became evident they would fail to win a higher minimum wage, Malloy reminded them of their successes.

The legislature passed bills, which he intends to sign, that improve how the state processes evidence in rape case, require better treatment of pregnant prison inmates, prepare the state for climate change, and reinforce its commitment to renewable energy.

“Together, we did those things and so much more,” he said.

Other bills approved this session with his support will expand financial aid for Dreamers, commit Connecticut to the National Popular Vote compact and provide pay increases for homecare and group-home workers.

He thanked his staff, who crowded into the chamber. Then Malloy left, giving a last wave over his shoulder as he exited to applause.