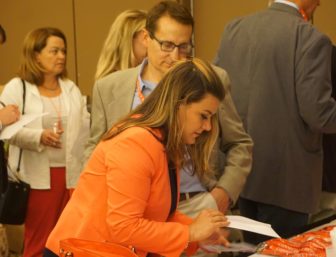 Erin Stewart checking in at the GOP convention.

Connecticut Republicans open their two-day state nominating convention Friday afternoon at Foxwoods Resort Casino, where Danbury Mayor Mark Boughton and Tim Herbst arrive as the consensus leaders in a field of gubernatorial contenders that just shrank by one: New Britain Mayor Erin Stewart is seeking the nomination for lieutenant governor.

Stewart, 31, a rising star in the GOP who did not enter the gubernatorial race until March, was facing elimination on the first gubernatorial ballot and had no path to qualify for the primary. Instead, she made calls Friday morning to the other GOP contenders for L.G., telling them she will be nominated in that race.

“When the numbers don’t work, they don’t work,” Stewart said. She and the rest of the New Britain delegation will be voting for Boughton, but she is not personally endorsing any gubernatorial candidate and said she would be a good partner to any of them.

But state Sen. Joe Markley, R-Southington, who sees himself as the front-runner for lieutenant governor, said he believes he still is the leader among delegates and is better positioned to win a primary than Stewart.

“She is to the left of the Republican Party,” Markley said.

Stewart, as the mayor of a racially diverse and economically challenged community, has signed budgets that raise taxes and praised a controversial busway that has a terminal in New Britain as good for economic development in her city. The project was green-lighted by Gov. Dannel P. Malloy and condemned by many Republicans.

“She and Malloy are the only people bragging about the busway,” Markley said.

As many as eight names are expected to be placed in nomination for governor on Saturday. About 1,150 delegates will cast votes under rules that the GOP hopes can produce an endorsed candidate on three ballots.

Rules drafted over the past two weeks, refined Thursday and to be finalized Friday call for a series of elimination votes: Candidates are eliminated if they fall short of 8 percent of the delegate vote on the first ballot or 15 percent on the second ballot. The last-place finisher falls out on subsequent ballots.

To win the convention endorsement, a candidate must win a majority — 50 percent, plus one vote. But for most of the nine candidates for governor, the goal is to reach 15 percent on any one ballot: Under state law, that is the threshold to qualify for a primary in August.

Only two of the eight, Boughton and Herbst, the former first selectman of Trumbull, are widely seen as already possessing commitments from more than 15 percent of delegates on the first ballot, winning them a ticket to the primary. Unclear is who will fall short of 8 percent in the first ballot — and who would get their delegates on a second ballot.

“It’s never been harder than it is this year,” said Richard Foley, a former Republican state chairman. 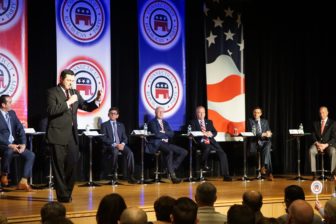 Two others, David Stemerman and Bob Stefanowski, are bypassing the convention and are petitioning for a place on the primary ballot, which requires gathering signatures from 2 percent of the 450,000 registered Republicans by mid-June. Both are wealthy former business executives largely self-funding their campaigns.

Further complicating the gubernatorial contest at the convention are the inevitable alliances with campaigns for down-ballot offices. There is a four-way contest for lieutenant governor and two-way fights for treasurer, comptroller and attorney general. Susan Chapman, a former municipal official in New Milford, is the only announced candidate for secretary of the state.

“It will be an interesting day, I think,” said J.R. Romano, the state GOP chairman.

One late wrinkle was which office would be voted on last.

Markley and others had pressed to make balloting for governor last, forcing Stewart to choose beforehand about dropping into the race for lieutenant governor.

State Rep. John Frey, the Rules Committee chairman, said the panel was inclined Thursday to make the vote for lieutenant governor the final order of convention business, but the matter would be reviewed again Friday.

Delegates will return on Saturday morning to vote on candidates for secretary of the state, comptroller, treasurer, governor and lieutenant governor. In addition to the more than 1,150 delegates, another 164 superdelegates are eligible to vote.

Scorecard for the GOP Convention
*David Stemerman and Bob Stefanowski are petitioning to qualify for the primary in August and are not seeking the convention’s endorsement.