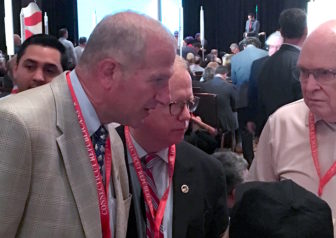 Shelton Mayor Mark Lauretti, a gubernatorial candidate who fell short of qualifying for a primary at the Republican convention over the weekend, said Sunday he will begin a petition drive Monday to get on what could be a very crowded GOP ballot in August.

Danbury Mayor Mark Boughton, who won the convention endorsement, and two others, former First Selectman Tim Herbst of Trumbull and Steve Obsitnik of Westport, already are guaranteed a spot on the primary ballot by winning at least 15 percent of the vote on one or more ballots at the convention.

“This inside baseball game has always been a difficult thing to crack,” said Lauretti, who ran for governor in 2014, failing to qualify for a primary.

Lauretti would be the fourth Republican to take out papers to begin a petition drive for the gubernatorial primary. To succeed, they need to collect signatures from 2 percent of registered Republicans — about 9,000 voters — by 4 p.m. on June 12.

David Stemerman and Bob Stefanowski, two wealthy businessmen who are largely self-funding their campaigns, bypassed the convention and have been collecting signatures since May 2, the first day allowed under state election law.

Mike Handler, one of the eight candidates who competed at the convention, also has taken out petitions, but he announced on Facebook he would not pursue a primary. Handler finished last on the first ballot with 4.06 percent.

Lauretti garnered 10.5 percent of the vote on the first ballot. Handler and Prasad Srinivasan were knocked out on the first ballot, which required winning 8 percent to continue. Lauretti had hopes of picking up support and getting to 15 percent on the second ballot. Instead, his delegates went to others, and his final tally was just 2.13 percent.

Lauretti said he has $100,000 in campaign funds to spend on a petition drive.

No one in Connecticut has ever qualified for a gubernatorial primary by petitioning, and only one candidate has qualified for any statewide primary: Peter Schiff, a Tea Party favorite, successfully petitioned to force a Republican primary for U.S. Senate in 2010. He spent $150,000 on an effort coordinated by J.R. Romano, the current GOP state chairman.

Lauretti said his record of attracting employers and keeping taxes low in more than two decades as mayor of Shelton would make him competitive, especially in a crowded field. Lauretti said there are 50,000 registered Republicans within 10 miles of Shelton.

“If I get on the ballot, I will win in Trumbull,” Lauretti said, a needle directed at Herbst.

A candidate conceivably could win a six-way primary with fewer than 25,000 votes. in 2014, a two-way GOP primary between Tom Foley and John P. McKinney attracted 79,426 voters. A three-way contest between Foley, Michael C. Fedele and Oz Griebel drew 120,171.