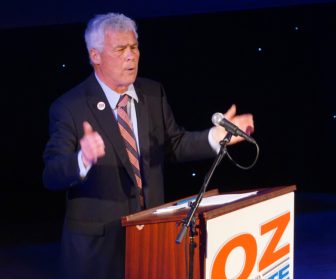 The candidate is named Oz, so the tornado warning Tuesday might have been a nice touch, a metaphor for a campaign intent on disruption. But it turns out that dire forecasts, downpours and lightning don’t do much to draw a crowd for an independent gubernatorial campaign, even one with an open bar, free appetizers and live music.

In a week bookended by the Republican and Democratic conventions, Oz Griebel and his running mate, Monte Frank, tried to generate a little buzz with what they called an unconventional political convention at Infinity Hall in downtown Hartford. Two hundred RSVP’d, but the turnout was measured in dozens, not hundreds.

“Those of you who braved the weather, we appreciate that,” Griebel said, inviting his audience to follow his lead of bolting the major parties and joining “the independent, radical middle.”

“We are tired of politicians putting party over people,” Frank said. “Together, we are building a new political movement that values people over parties.”

Not all in attendance were committed to a cause. Dan Filomeno of Wethersfield, the owner of a construction company, said he was ready to try a new approach to governing. His brother, Tom, is the ticket’s campaign treasurer.

“The state of Connecticut is a bureaucratic nightmare,” he said. 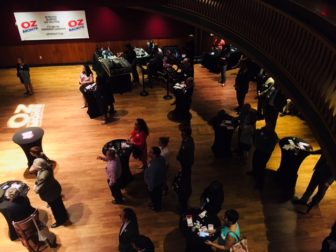 A crowd at their convention.

Matt Fleury, the president of the state Board of Regents, which oversees the community colleges and four regional state universities, said he stopped by out of friendship with Griebel, not a commitment to his candidacy.

Oz and Monte — this is a first-name ticket — still are in search of an audience five months after opening their campaign.

“What we’ve seen is a very positive reaction. I can’t think of anybody who said, ‘This is nuts.’ That’s what we’ve seen on a consistent basis,” Griebel said. “Is there enough of it? No. Is there critical mass? No.”

They say they’ve collected 9,000 signatures, looking for a cushion before they turn them in to be authenticated. Earning a place on the ballot in November requires the signatures of 7,500 registered voters.

When it’s official they are on the ballot, Griebel said, it will give them a boost of credibility.

Griebel, who ran for governor as a Republican in 2010, finishing a distant third in a GOP primary, is trying to do what no one in Connecticut has done since 1990: Win a gubernatorial election without the backing of a major party. And the last one to succeed, Lowell P. Weicker Jr., began his effort with universal name recognition as former U.S. senator.

“No parties. No politics. Just solutions.” That is their slogan.

Their platform is a broad-brush promise of job growth, transportation improvements, vital urban centers and sensible taxes. Their tax plank is: “Identify and put into action an efficient and fair plan for raising the appropriate revenue to achieve the state’s agreed-upon policy goals.”

Griebel, a former Republican, recently retired as leader of the MetroHartford Alliance. Frank, a former Democrat from Newtown, is a lawyer and bicyclist who has turned his athletic passion into political expression, riding from Connecticut to Washington in support of gun control measures. They are smart, affable and trying to find a way to catch fire, to compete with the Democrats and Republicans.

They’ve made contact with other groups trying to find a political space outside the  major parties. Drisana Hughes of SAM, an independent party called the Serve America Movement, addressed the crowd Tuesday night. So did Cathy Stewart of IndepentVoting.org.

“I will tell you that some candidates run as independents solely as a tactic to win. They  come, they go. Others see being independent as the way to go,” Stewart said. “Oz and Monte are in that category.”