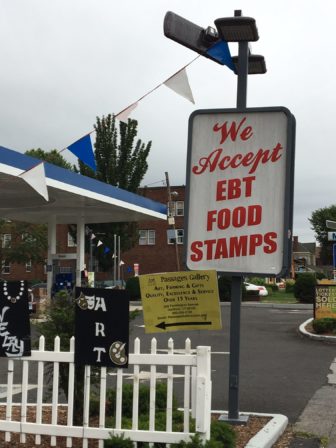 Washington – The U.S. House is about to vote on a farm bill that will reduce eligibility for food stamps, a move that has caused a partisan split, with most Democratic lawmakers opposing the legislation.

“This Farm Bill would kick 2 million people off food stamps, and cut benefits by more than $23 billion,” said Rep. Rosa DeLauro, D-2nd District in an impassioned floor speech. “Meanwhile, Republicans refused to include limits on subsidies provided for crop insurance — one of the few federal programs without any eligibility caps or payment limits.”

The massive farm bill would  authorize more than $850 billion in spending on all farm programs for the next five years. It also funds the food stamp program and would require “Able-Bodied Adults Without Dependents,” or ABAWD’s to obtain at least 20 hours of work or worker training a week to qualify for food stamps, called Supplemental Nutrition Assistance Program (SNAP) benefits.

Currently, the state has a waiver from those work requirements for those living in 114 Connecticut towns that have an average unemployment rate that is at least 20 percent above the national average, or about 4.8 percent. Bridgeport, New Haven and Waterbury are among the towns exempt from the work and job training requirements.

But the farm bill would limit waivers to jurisdictions with unemployment rates above 7 percent.

The House rejected an amendment offered by Rep. Tom McClintock, R-Calif., that would further limit Connecticut’s use of waivers so that no more than 5 percent of SNAP recipients are exempted from the work requirement.

The bill also would bar those who receive nominal heating assistance aid from receiving increased food stamp benefits. Right now, Connecticut, and other states, offer low-income people a nominal heating subsidy so they can boost their benefits.

There are about 400,000 food stamp recipients in the state. The Urban Institute estimates about 44,000 of these recipients could be affected by the new work requirements.

While they tightened eligibility, House Republicans rejected a White House idea that SNAP recipients receive food boxes that would take the place of about half of the money they receive on Electronic Benefits Transfer (EBT) cards.

The bill also would establish a new $7 billion grant program to help states fund training programs for ABAWD’s who are at risk of losing their benefits.

Republicans said changes in the farm bill are needed to promote more self-sufficiency.

“The result we want to have across the board is people bettering themselves, getting what they need and plug into the economy – get on that economic ladder of success and start moving up on their own,” said Rep. Mike Conaway, R-Texas, chairman of the House Agriculture Committee and drafter of the bill.

Anti-hunger advocates and other supporters of the food stamp program say the farm bill won’t result in more employment, only more hunger.

“Most individuals who receive SNAP benefits and are required to work are already working,” the AARP said in a letter urging House members to oppose the farm bill. “Expanding work requirements for SNAP would be especially challenging for older workers ages 50-59 who have a more difficult time finding employment after a period of unemployment.”

DeLauro argued that most SNAP recipients have income and asset limits and receive only $1.40 per meal in average benefits, while many who receive farm subsidies are very wealthy.

“SNAP recipients have work requirements. Millionaires and billionaires who pocket farm subsidies do not, even though many of them do not work the land,” she said.

The House hopes to hold a final vote on the farm bill Friday. But that was in doubt late Thursday because GOP House conservatives threatened to vote against the bill unless there is a vote first on an immigration bill that would punish “sanctuary” jurisdictions and limit family-based immigration.

The conservatives are outraged that a group of moderate Republicans are backing a procedure — called a discharge petition — that would force floor votes on bills that would protect Dreamers, young undocumented immigrants who came to the United States as children, from deportation.

Since few, if any, Democrats are expected to vote for the farm bill, Republicans cannot afford many defections by members of their party if they want to pass the legislation.

The Senate is expected to start work on its version of the farm bill next week.