Malloy delivers a pep talk and a heartfelt farewell 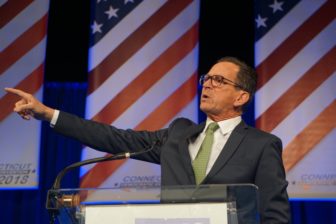 Gov. Dannel P. Malloy mixed a heartfelt farewell with an impassioned appeal to combat the policies of President Donald Trump to open the Democratic State Convention on Friday.

The governor, who is not seeking re-election after two terms, said control of Congress and the General Assembly is crucial to preserve values protecting women, minorities, immigrants and working-class families, as well as public safety.

The desire to help others “is part of our DNA,” Malloy said.

Connecticut embraced participation in the Affordable Care Act while Republicans in Washington “plot to take away health care for tens of millions,” Malloy said.

Connecticut, the governor said, also has been a national leader in mandating paid sick leave for all workers; protecting the rights of gays, lesbians and transgendered individuals; ensuring children of undocumented aliens are eligible for state aid; and promoting pay equity for women. 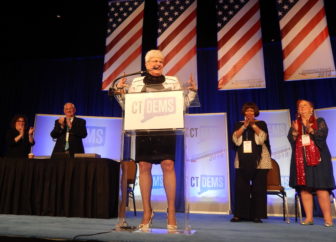 Lt. Gov. Nancy Wyman, put her assessment of the Trump administration’s health care policy in blunter terms. “Trump, yuck,” she said, adding the president has tried to roll back women’s health care 30 years. “We won’t allow that to happen. We will stop him.”

Wyman, who served eight years in the General Assembly and 16 as comptroller before winning two terms as lieutenant governor, thanked the party for its decades of support. And she pledged to return that commitment on the campaign trail this fall — despite her reputation for shunning comfortable footwear on all occasions.

“You walked miles, you knocked on doors, you spent hours on phone banks,” Wyman said. “And anyone who wants to run, I’ll do the same for you — in heels.”

In another jab at the White House, Malloy said Connecticut Democrats also surpass the Trump administration when it comes to honesty.

“We believe it is our obligation to tell the truth, every single day,” the governor said. “It’s a hard hard thing to do. Sometimes it’s hurtful. Sometimes it gets us in trouble, but telling the truth is fundamental to our democracy. … If we ever give up in that, then our democracy will be in even more trouble than it is today under Donald Trump.”

And on a day when the shooting at a Texas high school left 10 people dead, Malloy said the nation should follow Connecticut’s lead. The General Assembly and Malloy enacted a sweeping series of gun control measures in response to the December 2012 shooting at Sandy Hook School that left 26 students and staff dead.

“We know we can make America safer because we’ve done it in our own state,” he said, adding that, “You should celebrate as Democrats” that violent crime here has fallen more sharply than in any other state over the past four years. 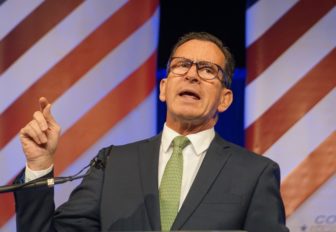 Malloy, who lost the Democratic primary for the gubernatorial nomination in 2006 and won it in 2010, acknowledged there probably would be more primary battles for party nominations this summer.

“Let no Republican — let no person — divide us, who we are, what we are, because we know what we believe, and we know what we must accomplish,” he said. “… Do not let them get away with it.”

Malloy, who has one of the lowest public approval ratings of any governor, has struggled with major budget deficits throughout much of his administration. But those shortfalls were driven, in large part, by surging retirement benefit costs stemming from more than seven decades of inadequate state funding.

But the governor insisted that he and Wyman did not let the fiscal limitations they inherited stop his administration from taking action.

“We have not been perfect. We have not been without making mistakes or having disagreements,” he said. “But you cannot deny we have moved the ball forward, and for that opportunity, I thank you,” he said. “So I want to say thank-you from the very deepest part of my heart, and my mind, for that matter.”