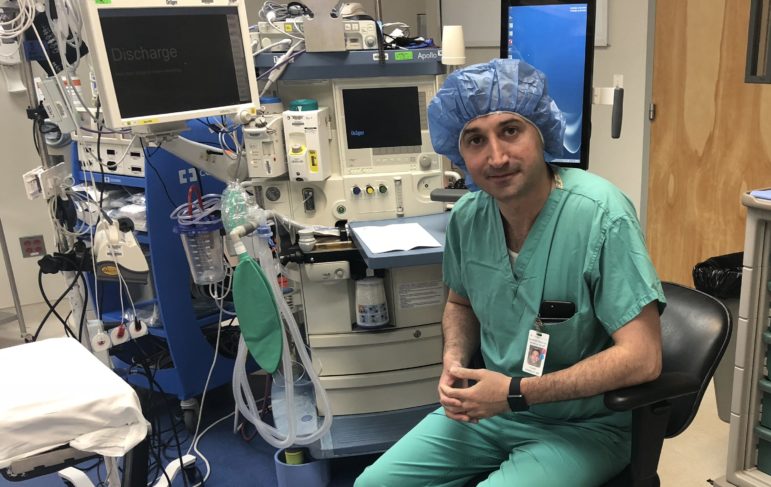 On Valentine’s Day, a team of surgeons, physicians and medical staff at Danbury Hospital successfully removed a 132-pound benign tumor from a 38-year-old woman in a single surgery.

The woman was referred to Dr. Vaagn Andikyan, a board-certified gynecologic oncologist, after a computed tomography (CT) scan revealed a large ovarian mass.

Within two weeks, the team developed and practiced plans for five potential scenarios to remove the tumor that occupied the patient’s entire abdomen.

The woman, who wished to remain anonymous, was discharged from the hospital two weeks after the tedious surgery.

In this Q&A, the Mirror sat down with Andikyan to discuss the rare tumor and what it took to successfully remove the mass from the woman.

When did this patient first come to see you?

I saw her in the office at the end of January, beginning of February for the first time and at that time we realized the magnitude of the problem.

When you see a problem of this magnitude, you kind of have to lay down the map: what is our first step, second, third, and in her case, it was multiple multiple steps.

When you saw her, had she gone to the doctor beforehand, and what kind of symptoms was she having?

She first saw her primary care [doctor] who referred her to an OB/GYN who realized it was beyond the skill-set of a regular OB/GYN. She referred the patient right away to us. 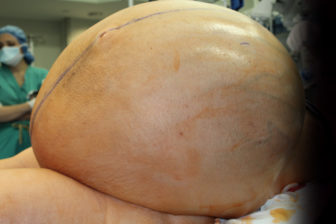 At that point the clock was ticking because she didn’t have much time in terms of her cardiac status, her legs, her nutrition. It was marginal. Her legs were so swollen that she was barely able to sit in a wheelchair. She couldn’t walk. There was no clothing of her size to wear. She couldn’t eat. She couldn’t drink. She was unable to perform any activities at all.

Do you know how long ago she realized something was wrong?

It was about two, three months prior to my first initial presentation when she felt her belly getting bigger, and about in November, she started feeling that something was wrong. I guess at that point the tumor started growing exponentially and it got to where it was in a two- to three-month period.

What kind of tumor is this?

This is a benign tumor that arises from the surface of the ovary.  The tumor produces a gelatinous fluid and it fills the mass with a large amount of fluid. It’s known that it may be big, but there are very few cases that are reported that are reaching the size of this tumor.

What other cases have you heard of?

There are some tumors above 100 pounds up to 200 pounds. However, it’s a handful of cases. In this particular case, everything was well documented and we were able to save our patient’s reproductive organs, despite the damage that she had.

Like you said, it was about three months before she saw you that she realized her belly was getting bigger and that she had some discomfort. And then it just started growing very very quickly. How fast was it growing?

Because I didn’t see her at the end of the November, but the patient told me she was doing pretty well … I am estimating the tumor was growing five to 10 pounds per week.

When you figured out what was going on, how did you break the news to her?

She knew that something was wrong. When we first saw her, she was in such an anxious and hopeless situation because she felt that nobody could potentially take care of this tumor. And when I saw her first, I gave her hope that we could potentially remove this tumor and she’ll feel normal.

That was a breaking moment in our interactions with our patient when she felt she could potentially do well. She was very compliant. It was around January, when there were a couple of snow storms, and she and her mom drove to appointments religiously.

I was thinking we are going to have a good outcome. We have a young mom, we’re going to save her. We’re going to help her feel better and we were prepared.
Dr. Vaagn Andikyan

You, the team of surgeons and the other medical professionals planned for five different scenarios. When you actually got her into the operating room and you were about to begin, what were you thinking?

My colleague from the anesthesia department did all precautionary measures. As soon as we started taking out the tumor, her blood pressure started dropping. We were able to maintain her heart rate and cardiac function by adding medication to pump her heart. She was on a ventilator.

She was doing really well. It was a very thorough and tedious surgery to make sure we didn’t injure neighboring organs, vessels, and to preserve her fertility.

How long did the surgery take?

The surgery was about five hours, that included our part and Dr. Goldenberg, who performed a very complex reconstruction. When you’re handling a tumor of this size, after the tumor is removed, there is excess skin. We removed about five to six pounds of excess skin. The skin was stretched so much from the tumor.

We knew that was going to happen. If we weren’t prepare for this, we potentially could have had a successful operation but wouldn’t have been able to close her abdominal wall.

Can you summarize the surgery for the everyday person to understand? What was the first thing you did after she was put under anesthesia?

So the first thing, we positioned the patient … and we had to make sure it was all sterile.

You start with a small incision and evaluate the situation. You start from one side … and slowly, tediously remove this tumor.

Do you take it out piece-by-piece?

No, you take out the whole tumor slowly, dissecting it from the wall. It took a couple of hours.

Do you know what causes these tumors? 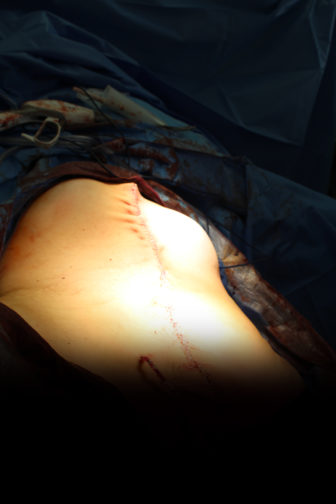 Patient after tumor was removed.

There is no science describing what exactly causes a tumor to grow so fast, so quickly. It has been described, as I mentioned before, that ovarian tumors of this type of a cell type could reach this size. However, what exactly triggers and causes it is unknown.

Is this the biggest tumor you have ever removed?

Yes. This type of a tumor, maybe a surgeon in their lifetime career may see only once. I will be surprised if I encounter [again] a tumor of similar size.

What’s the next largest you’ve seen?

Were you the first person to talk to her after she came out of anesthesia?

What did you say to her?

Everything went well. I gave her a thumbs up. She was very happy. [She was sedated and on a ventilator.]

Even though the surgery was successful, she had a very hard time maintaining her heart rate and pressure. It took three days for her heart and lungs to get together and that’s when she came off the medications and she was able to maintain her status.

When’s the last time you saw the patient?

I saw the patient about [two weeks] ago. She’s doing very well. She’s back to work and she lost close to 180 pounds from the first presentation from the last time I saw her. So it means that the tumor itself was 132 pounds, but because of the damage it was doing to her body, she had excessive fluid.

The inmate who died was being held at Osborn Correctional Institution in Somers.

Gov. Ned Lamont will expand unemployment eligibility to channel more than $1,800 this winter to about 38,000 residents.