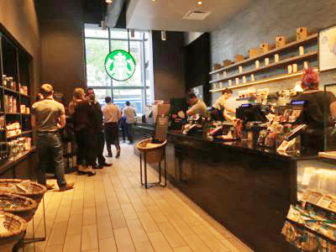 The Asylum Street Starbucks in Hartford was buzzing with orders Tuesday — right until 2:15 p.m. That’s when it became one of some 8,000 locations closed for mandatory anti-bias training.

For Joe Fortuna, a Morgan Stanley financial advisor waiting for his order, it was an important public statement.

“I think with an organization like Starbucks, it can’t be ignored, it’s a household name and it’s part of so many people’s lives that it gets the message across,” he said.

The coffee giant decided to initiate the nationwide shutdown and training after two black men were arrested while waiting in a Starbucks in Philadelphia last month. The incident, caught on video, prompted public backlash and a #BoycottStarbucks campaign on social media.

Starbucks CEO Kevin Johnson later publicly apologized to the men and said in a statement “our practices and training led to a bad outcome — the basis for the call to the Philadelphia police department was wrong.”

“And hopefully that’s a lesson to a lot of others, because we need that right now,” customer Fortuna said.

Certainly Connecticut has its share of racial bias, as Connecticut ACLU Executive Director David McGuire observed. The Philadelphia Starbucks incident was similar to a  recent incident at Yale in New Haven where a black graduate student who fell asleep in her dorm’s common room was reported to the police and questioned for more than 15 minutes.

“It highlights the need for everyone to examine their own bias —police and the public. It’s encouraging Starbucks is doing a training, We’re certainly a proponent of anti-bias training, but at the end of the day this is a much larger societal problem,” McGuire said.

Yale Psychology Professor John Dovidio said it’s unique that Starbucks is shutting down all its franchises to do the training, but changing habits that arise from implicit biases takes a lot of time.

“The psychology literature suggests an unconscious bias is a well-ingrained habit of the mind and it comes from growing up in a society with racist traditions and these associations get repeated over and over again,” Dovidio said. “But you can’t get rid of a habit just by understanding the habit better … you really have to do this in a kind of continuous way.”

These sessions are also effective if companies train people more specifically in what they do, and how to perform their tasks in an unbiased way, Dovidio added.

The company said the Tuesday session would set the foundation for a longer-term “anti-bias, diversity, equity and inclusion effort.” The training will “focus on understanding racial bias and the history of public accommodations in the United States,” and future sessions will address all aspects of bias and experiences, it added.

Advisers from the Equal Justice Initiative, the NAACP Legal Defense and Education Fund, and other social advocacy groups helped form the program curriculum created for the company’s 175,000 employees.

Most of the coffee chain’s 7,000 licensed stores, like those operated by grocery stores, hotels, universities or airports, remained open.