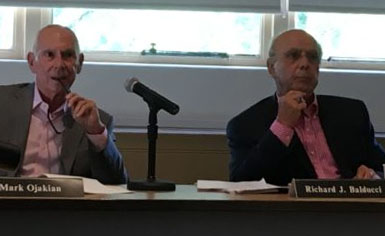 Mark Ojakian (left), president of the CSCU system, and Richard J. Balducci, chairman of the finance committee for the Board of Regents for Higher Education.

A key panel within Connecticut’s consolidated higher education system endorsed the framework for a new budget Wednesday that maintains the tuition schedule but would reduce dangerously low emergency reserves.

The Finance and Infrastructure Committee for the Board of Regents for Higher Education also reviewed revised cost-savings projections tied to the planned consolidation of administrative functions at the state’s dozen community colleges.

System administrators now project they can save $17.3 million annually by the 2021-22 fiscal year through gradual consolidation, though not at the pace originally proposed. The New England Association of Schools and Colleges (NEASC) declined in April to issue accreditation under the original proposal, which was expected to save $23.3 million per year by the early 2020s.

But Mark Ojakian, president of the Connecticut State Colleges and Universities (CSCU) system, told the finance committee the goal remains a one-community-college system that offers classes at 12 locations. This should provide the best opportunities for cost-savings that could avert the need to close one of the 12 community college sites.

“There’s still an appetite within some quarters of the General Assembly to have less locations,” Ojakian said. And while the system has been forced to raise tuition and fees several times over the past seven years due to significant cuts in state aid, officials also are committed not to order another increase now, he added.

“We need to honor that commitment to our students and their families,” he said.

Ojakian and Erika Steiner, the chief financial officer of the CSCU system, outlined a systemwide budget proposal for the fiscal year beginning July 1 that would spend slightly more than $1.22 billion. The system also is responsible for $34 million in debt payments related to dormitory construction financed through the Connecticut Health and Educational Facilities Authority.

Proposed spending is up about 6.5 percent from the current fiscal year. Much of that, though, is driven by surging fringe benefit costs fixed by contract. Nearly all segments of state government are struggling with this problem, which stems from more than seven decades of inadequate savings by legislatures and governors for pension and retirement healthcare programs.

To remain in balance, though, that plan might need to draw $8.1 million from system reserves. Latest projections also call for about  $6.4 million to be drawn from reserves to balance the books this fiscal year, which ends June 30.

And while Ojakian said administration officials would work to mitigate any potential shortfall in 2018-19 by trimming spending or finding new revenue sources, tapping the reserves again is a realistic possibility.

The regents’ system held nearly $190 million in its reserves — $137 million of which was not designated for any specific project or purpose — in the 2017 fiscal year.

If the proposed budget is adopted, the reserves will be down to $142 million — $123 million of which would be undesignated — at the end of the upcoming fiscal year.

Steiner said many accrediting agencies recommend sufficient reserves to cover six to nine months of operating expenses. Each component of the regent’s system has reserves that would cover less than one month.

The budget outlook would have been more troubling, Steiner said, had the legislature not taken the unusual step before it adjourned last month of approving $16.2 million in fringe benefit aid in 2018-19. This specifically applies only for one category of community college employees.

The state’s operating block grant for the regents’ system for the upcoming fiscal year is down by $5 million.

The finance committee voted unanimously to endorse the budget framework. The full Board of Regents is expected to vote on a detailed budget proposal later this month.

Ojakian said the trends involving state aid for the system, as well as the shrinking reserves, are troubling.

“There needs to come a point where we’re not having these discussions,” about dwindling reserves and potential system budget shortfalls, he said.

Given the state’s financial challenges, which are projected to continue for more than a decade given the poor health of its pension funds and other retirement benefit programs, Ojakian said that means finding ways to manage higher education more efficiently.

Though the community college administrative consolidation won’t proceed as quickly as planned given the NEASC decision in April, Ojakian and Steiner said new plans under development could reduce administrative and other full-time equivalent positions by 117 between now and 2022. The original consolidation plan called for the elimination of 163 FTEs by that time.

“The savings will be there as we move forward, I believe,” said Richard J. Balducci, chairman of the finance committee.