West Hartford — Mark Boughton watches NASCAR and does yoga, though not at once. In ninth grade, Ned Lamont played keyboard in a band called Flower Pot. Timothy Herbst played offensive line in high school for a legendary football coach. Steve Obsitnik’s kids didn’t want him to run for governor, but they got over it.

Are you ready to hire one of them for governor?

The four gubernatorial candidates who have qualified for the Democratic or Republican primaries took turns on stage Thursday night, submitting to truncated job interviews for “A Job Like No Other,” a one-hour special broadcast live on Connecticut Public Television. Each candidate was quizzed for about 12 minutes by Chris Ulrich, a body language expert, political consultant, improvisational actor, and personal coach.

“I think people got a different perspective of the candidates. It’s none of this banging on the podium and pointing your finger at them,” said former Gov. M. Jodi Rell, who hosted the event. “People can actually look at the candidates and get a glimpse of what that person is like, what’s their personality.”

The special was presented by the Rell Center for Public Service at the University of Hartford.

No one was asked, “How did you hear about the position?”

In most cases, these job applicants have been running since last year, seeking the office being vacated by Rell’s successor, Gov. Dannel P. Malloy. The four candidates on stage — Democrat Lamont and Republicans Boughton, Herbst and Obsitnik — qualified for primaries at the Democratic or Republican conventions.

Democrats Joseph P. Ganim and Guy L. Smith and Republicans Bob Stefanowski, David Stemerman and Mark Lauretti are trying to qualify by petitioning. None were invited, though Ganim, the mayor of Bridgeport, showed up and was given a ticket to watch in the audience at the Lincoln Theater. 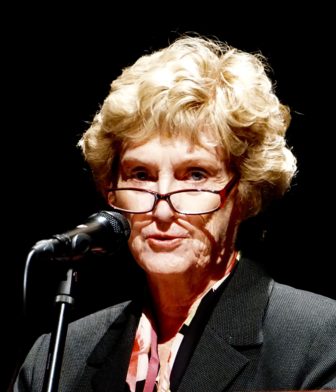 Ulrich posed questions unlikely to be heard at a debate: What are three adjectives your mother might have used to describe you at age 10? How about a friend today? Is there a failure that you cherish for what lessons it imparted? What is your leadership style? What’s your process to bring people together?

“Hyperactive — I never stopped moving,” Larmont said, explaining how his mother might have described him. “Optimistic” was the second adjective he offered. He considered a third before replying, “Good looking.”

The crowd laughed. All four apparently had supportive mothers. Boughton’s mother would have called him “intelligent” and humorous. Herbst’s mom found her son tenacious and resilient. Obsitnik was empathetic and inquisitive.

All four said  voters could learn something from the interviews.

“I think they get a little sense of the personality, a little bit of character, a little bit of who the person is, maybe what they are like,” Lamont said. “With those questions, you couldn’t slip into stump speech very easily. They were making you think on your feet, and people saw how you do that.”

“I think it allowed people to kind of see the human side of us and go through a leadership decision, the thought process we use and where we glean our experiences from,” Herbst said.

All four have been chief executives who have hired people: Boughton is the mayor of Danbury; Herbst was first selectman of Trumbull; Lamont founded and ran a cable-television company; and Obsitnik’s last private-sector job was running a cellular telephone antenna company.

“I would have asked people for their plans,” Obsitnik said. “I would have gone deeper into some experiential things— how you’d manage your way out of a problem. He tried to do that with limited time.”

“I would have asked what do you feel are three things you need to accomplish right out of the gate,” Herbst said.

Boughton said there is time for all of that.

The primaries are Aug. 14. CPTV intends to rebroadcast the show, time to be announced.