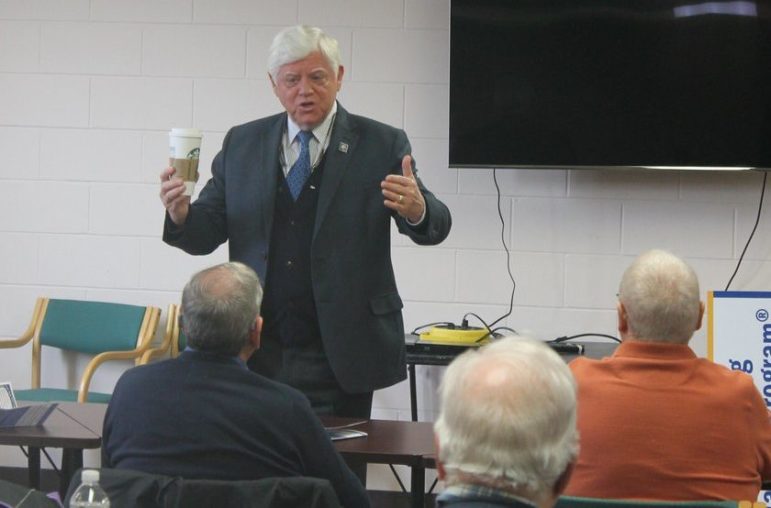 Washington – For years, Rep. John Larson has been traveling the country to promote a plan to stabilize Social Security and boost benefits for the poorest Americans.

Democratic colleagues in California, Florida, Pennsylvania, Texas, Virginia and other states have invited Larson, D-1st District, to speak to their seniors, and he enthusiastically accepts their offers, a Starbucks latte in hand.

“It costs less than a Starbucks latte to fix Social Security,” Larson said he tells his audience.

Larson’s plan is to increase the Social Security payroll tax by 1.2 percent over 25 years, which he said would cost most people less than the $4.50 cup of coffee he brings to his town halls.

“The program has not been actuarially sound since 1983,” Larson  said.

The Social Security Board of Trustee’s report also said the Republican tax-cut law is sapping revenue, and President Donald Trump’s phaseout of the Obama-era Deferred Action for Childhood Arrivals, which protected young immigrants known as “dreamers” from deportation, will also cost the system workers who would pay in benefits in the short term without being able to collect on them.

Larson, a member of the tax-writing Ways and Means Committee, said his proposed increase in the Social Security Tax would give those receiving the most modest retirement benefits a raise in benefit, so their income is at least 125 percent of the federal poverty level, or $12,140 a year.

Currently, Social Security payroll taxes are not collected on wages over $128,400. Larson’s bill would reimpose the tax on wages above $400,000.

Social Security covers 62 million people, including retired workers and their dependents, survivors of workers who have died and disabled people.

Larson bristles at those who call Social Security an “entitlement” the name for a federal program that must serve anyone who qualifies.

“This is not an entitlement,” he says. “This is something people pay for.”

Keeping Social Security solvent and its benefits generous enough to prevent  the elderly from falling into poverty is especially important as 10,000 Baby Boomers who are retiring every day, Larson said.

He disparaged Republicans who have proposed raising the retirement age for recipients or cutting benefits as a way to shore up the program and keep it solvent.

“Cutting Social Security, how does that help?” he asked.

With the federal deficit expected to balloon as a result of the new federal tax cuts, the Republicans are looking to “reform” social services programs to save money.

Yet Larson said there is hope for his Social Security 2100 Act, in a GOP-controlled Congress. That’s because Trump vowed during his 2016 campaign not to reduce future Social Security or Medicare benefits and has repeated those instructions to his budget office now that he is president.

Asked if Trump would back his bill, Larson responded “absolutely he would.”