State auditors are entitled to review a confidential report the Department of Correction has so far refused to provide, according to an opinion by Attorney General George Jepsen.

The report by Criminal Justice Institute, Inc. is one of two outside assessments commissioned under Correction Commissioner Scott Semple, and it could shed light on the quality of health care inmates are receiving at a time when prison health care has come under close scrutiny.

Semple has previously said the report contains an expert’s findings on “some specific cases that were brought to my attention about concerns about the quality of health care for a very small group of people.” Because the report may reveal the department’s legal strategy in future litigation, the report’s entire contents are protected by attorney-client privilege and are exempt from public disclosure, DOC maintains.

The attorney general was asked by the state Auditors of Public Accounts to weigh in after repeated efforts to get the report went nowhere.

“We have attempted to resolve this issue in an informal manner. However, after eight months, we have not received the contractor’s report or a definitive answer on whether the Governor’s Office and the Department of Correction are denying our access to it,” wrote State Auditors Robert J. Kane and John C. Geragosian in a letter to Attorney General George Jepsen.

The attorney general wrote in a seven page, June 12 opinion that the auditors can review the document and that sharing it with the auditors would not constitute a waiver  of the document’s confidentiality.

“In my opinion, the APA is entitled to review and copy the report, but it must do so subject to all applicable legal privileges, and thus may not further distribute or reveal the report or its contents. Release by the APA of privileged records, such as those at issue, could expose the State of Connecticut and its taxpayers to adverse legal and/or fiscal consequences,” Jepsen wrote.

Geragosian said his office hasn’t heard whether DOC plans to turn over the report. “We don’t have any indication as to whether they’re going to hand over the report, but we hope that they do. We’re disappointed that they haven’t.”

A spokesperson for the Department of Correction could not be immediately reached for comment Wednesday.

However, there is no way to force DOC to hand it over, Jepsen concluded. 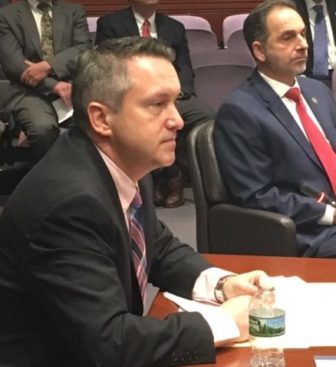 “While Conn. Gen. Stat. 2-90 provides the Auditors with access to privileged materials, it does not provide any enforcement mechanism if an agency fails to provide requested materials,” Jepsen wrote. “The statute appears to be premised on the assumption that agencies will comply with its requirements. If they do not, the Auditors are free to bring that refusal to public attention, or to seek such action by the General Assembly as they may deem appropriate.”

“Our office has no enforcement authority,” he said. It is our role to look at the operations, efficiency, effectiveness of state government […] and report on it. At that point its up to the policy makers and the public through the media to be able to weigh in on it.”

The auditors maintain that without that document, they can’t fully audit the department. In addition to investigating the issues with health care oversight and quality, the auditors have said they have a duty to ensure the state got what it paid for in the $63,000 report.