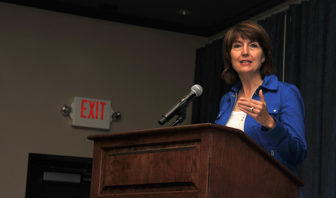 Rep. Cathy McMorris Rogers, a member of the House Republican leadership has a top rating from the NRA for her voting record to expand gun ownership and her effort to weaken federal gun laws.

She was honored as a “Promise Champion” for helping Sandy Hook Promise shepherd a legislative priority through Congress this year, the STOP School Violence Act that aims to improve school safety and prevent gun violence.

That bill, which was passed with bipartisan majorities in the U.S. House and Senate and signed into law by President Donald Trump, provides federal grants to schools, law enforcement and others who seek training to prevent school violence. Sandy Hook Promise, an organization that was created to fight gun violence by parents who lost their children at the massacre at Sandy Hook Elementary School, provides that type of training.

She told the audience at the Sandy Hook Promise gala Wednesday evening that she worries about the safety of her children when she sends them off to school.

“We must have courageous conversations about what programs and solutions are going to work to keep them safe,” McMorris Rodgers said.

“We must have courageous conversations about what programs and solutions are going to work to keep [children] safe,”
U.S. Rep. Cathy McMorris Rodgers

She represents a Washington state congressional district that is home to Freeman High School, the scene of a school shooting last year that resulted in the wounding of three students and the death of another.

As part of the GOP House leadership, she has been criticized by gun control groups for opposing any gun control bills to come up for a vote in the U.S. House, other than a “Fix NICs” bill that encouraged better reporting to the FBI’s gun buyer background check system and was supported by the NRA.

“We are not a gun-control organization, we’re a gun-violence prevention organization,” said Nicole Hockley, a co-founder of Sandy Hook Promise who lost her 6-year-old son, Dylan, in the Newtown shooting.

She also said Sandy Hook Promise always honors both a Republican and a Democrat at their galas. “We’re a non-partisan organization,” Hockley said. “We don’t support candidates… we honor people.”

Hockley also asked “What senator or congressman has a 100 percent perfect  record?”

Sen. Bob Casey , D-Pa., was honored with McMorris Rodgers Wednesday night for sponsoring the “Disarm Hate Act” that aims to keep guns out of the hands of those who commit violent criminal acts based on hate.

Other Republicans honored as champions by Sandy Hook Promise in the past include Sens. Susan Collins, R-Maine, and Pat Toomey, R-Pa., who crossed party lines after the Newtown shooting to vote for a bill that would expand FBI background checks to purchases at gun shows and to those who buy weapons from individuals over the internet. To the dismay of Newtown families sitting in the Senate gallery that day, the Senate rejected that bill, despite its support by a handful of Republicans.

Sen. Bill Cassidy, R-La., who is a strong gun rights supporter, was a 2016 gala  honoree, along with Senate Minority Leader Chuck Schumer, D-N.Y. Cassidy was the Senate sponsor of the STOP School Violence Act.

Unlike Collins or Toomey, McMorris Rodgers has never voted with Democrats on a gun bill and has long been a staunch gun rights advocate.

A few days after the Valentine’s Day massacre at the Marjory Stoneman Douglas High School in Parkland, Fla., McMorris Rogers was scheduled to be a speaker at a Republican fundraiser that featured the auctioning of an AR-15 rifle — the style of weapon used by the student shooter in Parkland and by Adam Lanza in his rampage that killed 20 first graders and six educators in Newtown.

Plans to auction off that rifle were dropped after POLITICO ran a story about the event.

McMorris Rogers earned her top grade from the NRA for supporting the gun right’s group’s top legislative priority this year, a bill that would allow those with permits in one state to carry their firearm into another state, and co-sponsoring bills that would loosen restrictions on interstate gun purchases and ban gun registration and trigger lock laws in Washington D.C., which has some of the toughest gun regulations in the nation.

Her record on guns has made McMorris a target of a gun control group founded by Gabby Giffords, a former congresswoman from Arizona who was a victim of a mass shooter. The Giffords political action committee is running ads attacking McMorris Rodgers for “a clear record of opposing gun safety measures that could prevent another mass shooting,” and accepting “tens of thousands” of dollars in contributions from the NRA since 2004.

Sandy Hook Promise, which was co-founded by Mark Barden, who lost his 6-year-old son Daniel in the Newtown shooting, appears to have been successful at raising money. Reports filed with the Internal Revenue Service show that the non-profit group raised about $3.5 million in 2015 and nearly $5.6 million in 2016.

Reports filed with the  Secretary of the Senate show the group has spent $435,000 on lobbyists in Washington since 2013. Those records show the STOP School Violence Act was one of Sandy Hook Promise’s top lobbying priorities.