A crash course on luring sports betting from the shadows 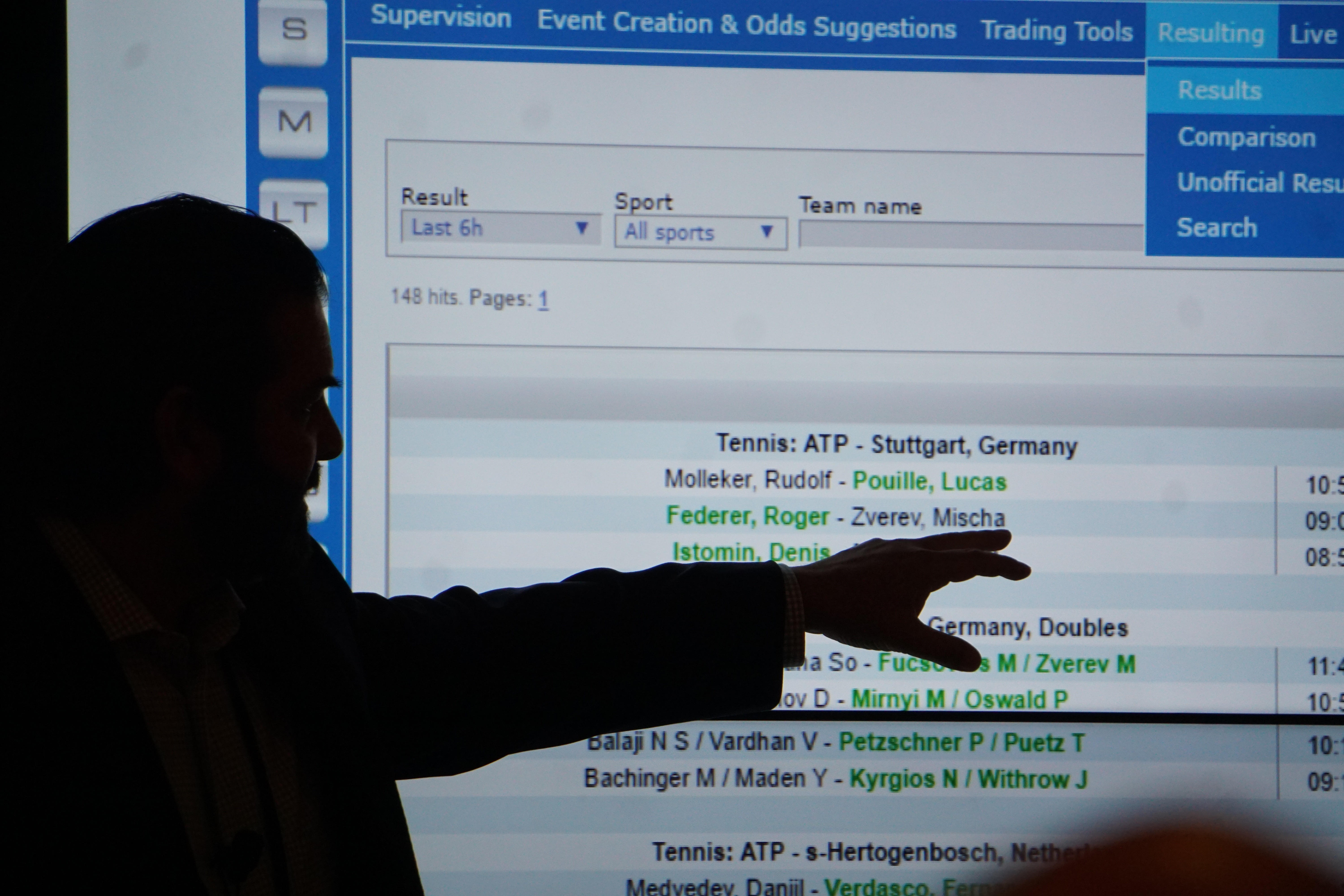 Stamford — Victor Bigio recalled the time in 2004 he attended a conference in Las Vegas geared to the shadowy world of online bookmakers and poker rooms. Everybody seemed to be named John Smith, and Bigio wondered if the whole thing was an FBI sting to lure offshore operators onto U.S. soil.

Bigio says he still doesn’t know the real names of some of the bookies he met as a marketer in Costa Rica, where  operators flocked to set up wire rooms that looked every bit like a busy American Airlines call center, physical evidence of how quickly American bettors adopted the convenience of doing business on a desktop or smartphone.

The desire of the online poker operators to keep a low profile was well-founded. The U.S. Department of Justice put some of the biggest sites out of business with a criminal indictment unsealed on  April 15, 2011, a day gamblers still call Black Friday. And it indicted 32 others and shut down Legendz Sports, a Panama-licensed sports-betting site, in 2013.

So, it was amusing, even a little jarring, for Bigio to recently find himself at a gambling seminar in corporate Connecticut, more specifically in Salon F of the Stamford Marriott Hotel & Spa with 75 others. There was an OTB guy from Suffolk, N.Y.; a casino and horse-track general manager from Ruidoso Downs, N.M.; the Harvard-educated consumer-protection commissioner of Connecticut, and three silent observers from the National Hockey League.

The agenda: How to make a buck by taking bets on sports.

“It’s a massive opportunity,” said Andrew Gaughan, the chief executive officer of Sportech, a U.K. gambling concern that sees its future in the U.S., where it owns rights to off-track betting in Connecticut and provides a variety of business-to-business gambling services to tracks and casinos throughout the world.  “We’ve got to jump on it.”

Gaughan and Richard McGuire, the Sportech chairman, were genial hosts of a one-day crash course on sports betting, a seminar for gambling concerns and regulators that mixed in a sales pitch for Sportech and its partner, Sportradar. By the end of the day, attendees would know there is money to be made taking bets on the familiar and the exotic, everything from the NFL to Malaysian badminton, Australian rugby, and yes, UConn women’s basketball.

“You should know Bobby is our partner. He needs no introduction,” said Gaughan, adding Valentine would be available to talk business or baseball. “He’s a great guy.”

There were reminders that this is a business with a colorful past and a language all its own. Even in the high-tech world of betting apps, bettors still are grouped as unsophisticated “squares” and professional “sharps.” But for much of the day, the speakers in Salon F sounded like commodity traders, risk managers and tech nerds.

And everyone, it seemed, used their real names. 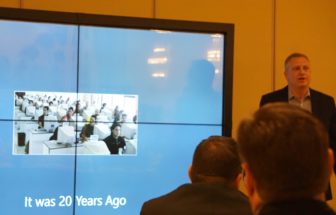 It’s a new world for sports betting. The Supreme Court of the United States says it’s legal, or at least it’s legal for any state that wants to play — competing against the offshore guys who are still around, despite periodic prosecutions. The Legendz case, rather than undermine sports gambling, seemed to underline that Americans no longer were scandalized by it.

The foreman of a jury that convicted two of the defendants actually wrote the judge to argue against prison time: “With all the ‘legal’ sports gambling that goes on in the U.S., coupled with the fact that no one was physically harmed and nobody was forced to place bets, I see no threat to society by allowing both … to avoid prison time.”

The judge concurred. The case concluded last year with no prison time for the Legendz founder.

Last month, the Supreme Court effectively invited the business back on shore, striking down a federal law that had limited most sports betting to Nevada. Connecticut is among the states moving towards legalization, potentially in a special session this summer.

Connecticut may be a state colonized by Puritans, but it has grown comfortable with legal gambling in fits and starts: a booming lottery, now-defunct dog tracks and jai alai frontons, off-tracking betting, and, most notably, deals that effectively gave the state a financial interest in two tribal casinos, Foxwoods and Mohegan Sun.

In 2017, the state made $623.4 million off gamblers, according to the Department of Consumer Protection. The majority came from a quasi-public Connecticut Lottery Corp. that returned $349.4 million to state coffers, according to DCP, though the lottery says the actual number was $330 million. The state’s 25-percent share of slots revenue from the two casinos was $270.7 million, followed by a modest $3.4 million from off-track betting.

The argument for legalizing sports betting is a simple one: The industry already exists, mostly unregulated, untaxed and offshore.

Regulus Partners, a consulting firm that describes itself as “a strategic consultancy focused on international gambling and related industries,” estimates the illegal U.S. market as having a $42 billion handle and $2.5 billion in gross gambling revenue. Handle is the total money waged; the latter is what’s left after paying the winnings.

In Connecticut, the illegal handle is estimated by Regulus at $600 million, with $36 million in gross gambling revenue. 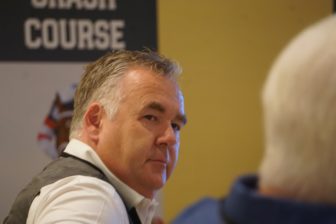 Paul Leyland, a partner at Regulus, told the crash-course attendees to be precise in their language: The handle in any gambling enterprise tends to be a gaudy number, reflecting the churn of dollars bet and paid out; Gross gambling revenue, or GGR, is the better metric of what what a gambling market is worth.

Leyland said no one, either a state like Connecticut or a casino, should think about opening a sports book without the ability to take bets on line. Globally, about one-third of bets are placed on line, but the share is two-thirds in the U.K., Nordic countries and other mature sports gambling markets.

“Retail is not dead, but it’s not growing, either,” he said.

“It’s vitally, vitally important you make it easy for your customer to place bets,” Roy said. 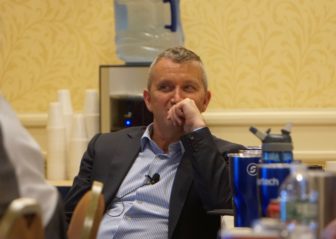 Verrengia and Berger attended the crash course in Stamford, as did at least two lawyers for the General Assembly and Michelle Seagull, the state’s commissioner of consumer protection.

“Certainly any time you are regulating a market, you want to understand how it works so that your regulations can  make sense in terms of how the market works,” Seagull said during a break. “I’m really getting a sense of how complex this market and this industry really is, and that’s important as well.”

Paolo Personeni, the Sportradar senior executive who came to the business after careers in investment banking and consulting at Bain & Co., explained how the company establishes the betting lines, books the bets, adjusts the odds to reflect wagers, tracks the results and directs the payouts. He spoke in terms of a large, complex market, not dissimilar to a stock exchange.

The regulatory issues are myriad. Will betting on collegiate sports be legal? What other restrictions will be placed? How will it be taxed? And how creative will the books be in offering potential bets?

Pre-game bets on which team will win or beat the odds are giving way to more exotic wagers, including some that can be placed during a game — the propositional or prop bets.

“In play is the growth area right now,” said Roy, the sales director. “It is a growing segment, but at the beginning, the first time bettors that are going to be coming to you, it’s going to be mainly pre-match betting.”

Roy stood before an oversized interactive computer screen about the size of 4-by-8 sheet of plywood and demonstrated how the company tracks professional and collegiate sports around the world, breaking each game into a series of discrete factors — all of which could be the subject of a bet.

He opened a pull-down menu of prop bets. There are 168 for soccer, 61 for basketball, 33 for football.

It’s up to individual jurisdictions if they will allow betting on collegiate sports, but they should be aware the collegiate market is big and getting bigger, he said.

“College football this past year surpassed the NFL in Nevada in terms of revenue,” he said. “A lot of that is because of the number of college games offered. There are a lot more money-making opportunities there. The odds and the odds-making on the NFL is so sharp that it’s difficult for a lot of bettors to make money on that. So,  they now start going to college football instead.”

To his potential customers, Roy told them to keep his company in mind if their jurisdictions legalize sports betting.

“We at Sportradar have more in-play, college coverage than anyone else by a mile,” Roy said. “We already cover one hundred percent of Division I basketball, Division I football. We cover baseball, women’s basketball as well — especially important in Connecticut here.”

Bigio, who calls himself a historian of on-line gambling, gave the audience an overview of the black market, then a review of the marketing opportunities to bring in fresh gamblers.

“It’s nice,” he said, “to be with everybody using their real names.”

Connecticut’s transportation program has been riddled for more than a decade by broken funding promises from both political parties.

Lawmakers who participated in an annual economic summit Monday differed on whether CT is becoming more friendly or hostile to businesses.