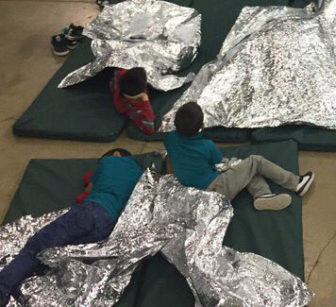 Children in the custody of U.S. Customs and Border Patrol in Texas.

The same poll, released Monday, indicated American voters also support, 79 – 15 percent,  allowing immigrants who were brought to the United States as children, known as “dreamers,” to remain and ultimately to apply for citizenship.

The pollsters say support for dreamers has ranged from 77 percent to 81 percent in every survey they conducted this year.

“If you are a dreamer, voters say, ‘We have your back,’” said Tim Malloy, assistant director of the Quinnipiac University National poll.

The poll surveyed 905 voters nationwide and had a margin of error of plus or minus 3.9 percentage points.

Respondents as a whole strongly opposed   — by nearly 40 percentage points — the policy of separating children from undocumented parents apprehended at the border. But Republican voters told the pollsters they support the separation policy 55-35 percent.

The separations are a consequence of President Donald Trump’s “zero tolerance policy” that requires undocumented immigrants to be held in federal jails, where minors are barred, instead of immigration detention facilities.

Yet Trump has blamed Democrat for the separations, saying they have failed to support an immigration bill that would fund a wall between the United States and Mexico and beef up border security.

“It is the Democrats fault for being weak and ineffective with Boarder Security and Crime,” Trump tweeted on Monday. “Tell them to start thinking about the people devastated by Crime coming from illegal immigration. Change the laws!”

The poll was conducted through Sunday when Customs and Border Protection  distributed the first photos of immigrant children being housed in chain linked fence pens, sleeping on thin mattresses on concrete floors; and when former first lady Laura Bush’s released an op-ed condemning the separation policy.

“More than 100 of these children are younger than 4 years old,” Bush wrote. “The reason for these separations is a zero-tolerance policy for their parents, who are accused of illegally crossing our borders.

The former first lady also said “I live in a border state. I appreciate the need to enforce and protect our international boundaries, but this zero-tolerance policy is cruel. It is immoral. And it breaks my heart.”

Outcry over the policy has also come from Democratic and Republican lawmakers, immigration advocates and the United Nations and religious leaders.

“I came to this country at the age of 2 which means that if I were to have arrived today I would of been ripped apart from my family, and put in a prison made for children,” said Yenimar Cortes, a dreamer from New Haven. “These families are are victims of poverty, hunger, and violence, and come to United States seeking for help because they have hope that they make a home here and finally be safe.  Seventeen  years ago my family was one of those families at the border. We came escaping poverty in Mexico.”

Trump and other supporters of the zero tolerance policy said criminals were using children as cover to cross the border.
“Children are being used by some of the worst criminals on earth as a means to enter our country​,” Trump complained on Twitter on Monday.

Also on Monday, Department of Homeland Security Secretary Kirstjen Nielsen said the administration “will not apologize for the job we do or for the job …that the American people expect us to do.”

ProPublica publishes audio of children taken from their parents

“Illegal actions have and must have consequences,” Nielsen said. “No more free passes, no more get-out-of-jail-free cards.”

The remarks brought a rebuke from Connecticut Sen. Richard Blumenthal who was among the first Democratic lawmakers to call for her resignation.

But approval of either measure is not assured – few if any Democrats are likely to vote for them and there could also be Republican defectors.

The Quinnipiac poll showed voters opposed, 58 – 39 percent, Trump’s plan to build a wall along the border with Mexico.  The only listed groups to support the wall are Republicans, 77 – 17 percent, and white voters with no college degree, 52 – 44 percent.