Washington –  The Senate late Monday approved a $716 billion defense authorization bill that trims the number of F-35’s the Pentagon can purchase this year, but allows for more spending on Electric Boat submarine programs and Sikorsky-made helicopters.

The National Defense Authorization Act, or NDAA, would allow the Pentagon to purchase 75 Lockheed Martin F-35s, cutting the Trump administration’s request by two jets “to realign the program towards sustainment.” The Air Force and Navy would each lose an F-35, whose engines are made by Pratt & Whitney.

In addition, the defense bill, which was approved on a 85-10 vote with the support of Connecticut Sens. Richard Blumenthal and Chris Murphy, would remove Turkey from the F-35 program over its detention of U.S. citizen Andrew Brunson.  A Christian pastor who could be jailed for up to 35 years, Brunson has denied terrorism and spying charges, but has been in  detention since 2016.

Versions of the F-35, also known as the Joint Strike Fighter, have been purchased by a number of U.S. allies. Turkey planned to purchase more than  100 of the planes.

The House NDAA, approved last month, gives approval for 90 F-35s for the Pentagon and does not bar Turkey from buying the planes. A conference between House and Senate negotiatons will produce a final bill. 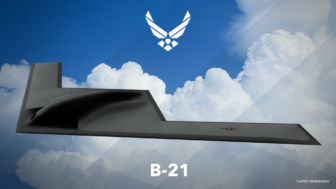 An artist’s rendering of an Air Force B-21 bomber.

The bill also continues development of the new  B-21 Raider Long Range Strike Bomber, whose engines will be built by Pratt & Whitney. The legislation  provides $2.3 billion to fund research and development for the nation’s newest stealth bomber.

Blumenthal, a member of the Senate Armed Services Committee, said he secured an additional $74 million above the Trump administration’s request to modernizing the Air Force’s C-130H fleet, which includes the NP2000 8-Bladed Composite Propellers made in Connecticut by UTC Aerospace Systems.

The bill also authorizes nearly $3.8 billion for the new Columbia Class nuclear ballistic sub program and nearly $7.6 billion total for the Virginia-class attack submarine program – $4.4 billion to keep the two-a year construction pace of the submarine and $3 billion in advance procurement funds. Both the Columbia class and the Virginia class submarines are built by Electric Boat.

The bill includes an additional $250 million in advanced procurement funding above the Trump administration’s request. The money could be used by the Navy to help pay for a third Virginia class sub in fiscal years 2022 and 2023 – or to expand the submarine industrial base to support planned increased in submarine production.

“I’m proud that Connecticut plays such a vital role I our defense industry,” Blumenthal said on the Senate floor during debate on the NDAA last week. “Five percent of our country’s defense spending is done in Connecticut and every dollar of it is critical to our national security, involving production of submarines at Electric Boat and F-35 engines at Pratt & Whitney  and helicopters at Sikorsky, notably the heavy lift.”

President Donald Trump is expected to sign a final defense bill. But the White House may balk if a final bill contains a provision that’s in the Senate-approved bill.

It would nullify a deal the Trump administration has negotiated with Chinese telecommunications company ZTE.  Under the deal, the U.S. Commerce Department agreed to lift penalties against the company in exchange for the ZTE paying a $1 billion fine and embedding a U.S.-selected compliance team into the firm.

ZTE is accused of violating trade laws by selling sensitive technologies to North Korea and Iran.