GOP immigration bill would allow lawsuits against ‘sanctuaries’ like Connecticut 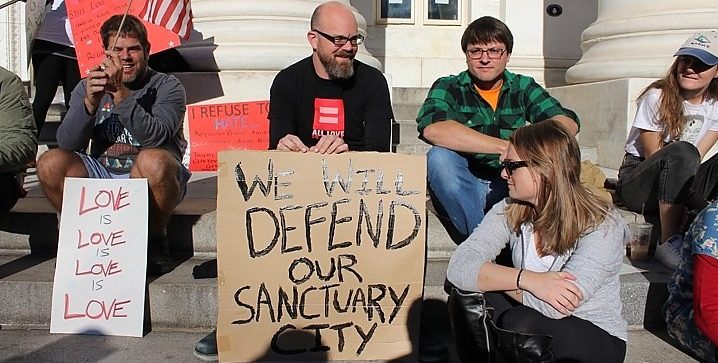 Washington –A House Republican immigration bill adopts a new tactic to punish “sanctuary” cities and states – making it easier to sue them.

The legislation aims to punish states like Connecticut and California that fail to respond to requests from federal immigration authorities to hold prisoners past their release dates so they can be picked up and deported.

Courts have ruled that compliance with those requests, called “detainers” is voluntary.

Connecticut in 2013 passed the “Trust Act” that allows state and local law enforcement agencies to ignore a federal detainer for an immigrant if he or she hasn’t committed a serious felony.

So the state, and several Connecticut cities including  Hartford and New Haven, don’t comply with all federal detainers.

The immigration bill, which could be voted on this week,  would make jurisdictions that refuse to cooperate with immigration authorities liable for some crimes committed by the undocumented immigrants they release.

Under the bill, jurisdictions that decline detainer requests could face lawsuits if an immigrant they release commits murder, rape or sexual abuse of a child. The victim of the crime or the victim’s relative would be allowed to sue the jurisdiction, as long as the immigrant is convicted of the crime and sentenced to at least one year in prison.

The bill would also require jurisdictions to hold an immigrant up to 96 hours after his or her release date if that immigrant is subject to a detainer request from U.S. Immigration and Customs Enforcement. It would also shield these jurisdictions from lawsuits against them for declining to immediately release prisoners whose jail terms were completed.

“This proposal is another attempt by Trump’s Republican Party to advance their goal of sowing fear and anxiety, but it falls short of making communities across the nation safer,” said Leigh Appleby, a spokesman for Gov. Dannel Malloy.

Appleby said the proposal is “likely unconstitutional on several grounds, and some components are already subject to ongoing litigation.”

“It’s getting harder to believe that they are serious about lowering crime and seems as though they are more concerned about their own midterm elections,” Appleaby said.

The new detainer policy is part of a massive immigration bill that’s considered a compromise between moderate and conservative House Republicans. It would provide a path to citizenship for young undocumented immigrants but restricts legal immigration, limits asylum claims and budgets $25 billion for the construction of a border wall and other border security measures.

House Republicans will also consider a more restrictive bill that would limit legal immigration even further, provide more money for President Donald Trump’s border wall and protect young immigrants known as “dreamers” from deportation, but would not give them a path to citizenship.

Trump met with House Republicans Tuesday evening about the proposed immigration bills, amid increasing criticism of his administration’s policy of separating children from their parents at the border.

He did not endorse either of the Republican immigration bills, but said he would support any bill that passed. The legislation is not expected to have much, if any, Democratic support, so the GOP, which has a majority in the chamber, can’t have many defections.

“I’m with you 100 percent!” Trump told the GOP lawmakers. “I will not leave you in the wilderness.”

Rep. Markwayne Mullin, R-Okla., said Trump laid out his main principles on immigration and told Republicans he “wanted to take care of the kids,”  referring to the family  separation crisis.  Other Republican lawmakers said they were not sure what Trump meant.

Trump has claimed family separations at the border are “a result of Democrat-supported loopholes in our federal laws.” But they are actually the result of a Trump administration decision to prosecuted 100 percent of the adults caught crossing the border illegally even if they came with children, who under law can’t be detained in a federal facility.

Trump also tweeted that “Democrats are the problem. They don’t care about crime and want illegal immigrants, no matter how bad they may be, to pour into and infest our Country, like MS-13. They can’t win on their terrible policies, so they view them as potential voters!”

Democrats, including those representing Connecticut in Congress, have blasted the family separations.

“GOP & POTUS r meeting tonight,” tweeted Rep. John Larson, D-1st District, before the president met with Republican House members. “They control all 3 branches of govt. They must emerge out of this & end the policy of taking kids from their families. Or they must own the responsibility of using kids as hostages as a deterrent & political leverage to build a wall. What a disgrace.”

While there is widespread support in the U.S. House for Trump’s immigration policy, there are also some Republican lawmakers who are critical.

Costello, who is not seeking re-election, also said GOP hopes of persuading  Democrats to support funding for Trump’s border wall or other GOP immigration goals in exchange for an end to the child separations are misguided.

“They are going to say ‘It’s your problem, you own it'” Costello said.