CT Dems to travel to border as Congress stumbles on immigration

Washington – Most of Connecticut’s congressional delegation plans to travel to the U.S.-Mexico border this weekend to visit with immigrant children who have been forcibly separated from their undocumented parents. 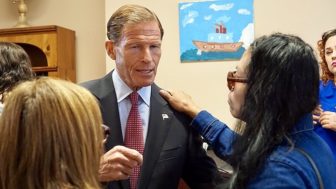 Sen. Richard Blumenthal said he will travel to New Mexico with the Democratic U.S. senators of the state, Sens. Martin Heinrich and Tom Udall.

After planning to attend one Thursday night in Hartford, Blumenthal plans to hold a rally Friday evening in Las Cruces, N.M., then visit a temporary shelter for migrant children in Tornillo, Texas and nearby border patrol stations where migrant families are housed temporarily before their children are are transferred to the care of the Department of Health and Human Services’ Office of Refugee Resettlement. Blumenthal also plans to travel to a U.S. port of entry in El Paso, Texas to receive an overview of the process and procedures for asylum seekers.

Blumenthal joins Reps. Rosa DeLauro, D-3rd District and Joe Courtney, D-2nd District, Jim Himes, D-4th District and  Elizabeth Esty, D-5th District  in traveling to the U.S. border with Mexico this weekend. The Connecticut lawmakers are part of a growing delegation of U.S. House members, led by House Minority Leader Nancy Pelosi, D-Calif., who have been provoked by the Trump administration policy of separating immigrant children from their parents at the border.

But first lady Melania Trump got to the border first, with a surprise trip to the Upbring New Hope Children’s Center in McAllen, Texas, part of the Lutheran Social Services of the South, a facility that is overseen by DHS.

President Donald Trump on Wednesday signed an executive order aimed at ending the separations. But the order does not explicitly address what happens to more than 2,300 children who have already been separated from their families.

And the process of locking up all who are caught crossing the border without authorization, even those who present themselves at ports of entry with asylum claims, will continue.

But now families with children will be detained together.

“They are still talking about keeping children and infants incarcerated,” Courtney said.

Meanwhile, Congress is deadlocked on the immigration issue.

The U.S. House on Thursday failed to pass an immigration bill drafted by conservative Republicans and postponed a vote on a more moderate GOP bill until next week.  All House Democrats and 41 Republicans voted against the hard-line measure that was rejected on a 231-193 vote.

Trump, who urged Congress to act on immigration, undercut the efforts of House Republicans to pass an immigration bill Thursday with an early morning tweet that said the U.S. Senate would reject anything the House approved.