Fasano’s pet project: Banning the leasing of dogs and cats 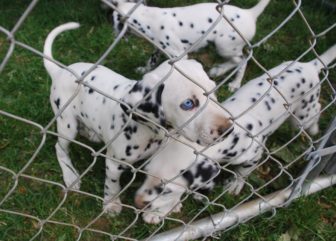 State Senate Republican President Pro Tempore Len Fasano of North Haven has a pet legislative project — literally.  He wants Connecticut to ban the practice of leasing, rather than selling, dogs and cats.

A long-time dog owner, Fasano says he can’t abide the thought that unwitting pet lovers could wind up losing their family dog when they can no longer make payments on it.

Fasano has not encountered any reports of the problem in Connecticut. But the senator, drawing inspiration from California’s new law prohibiting the practice, is now sponsoring legislation that he believes would nip the problem before it manifests here.

“I think it could affect Connecticut…. they just started it. Maybe it would hit Connecticut sometime in the future,” he said. “I want to be proactive to stop it before it happens here.”

The legislative leader got plenty of support from his colleagues for his dog-friendly measures, passing it unanimously through the state Senate in early May. The state house did not take up the issue, but Fasano is not deterred.

“I think legislators were stunned that there even was a mechanism to lease,”  Fasano said. He attributed much of the policy’s success to proper timing. “I am fairly confident we will have enough support to get it passed next year.”

Fasano said he heard about it on the radio.

“The stories I have heard about people leasing dogs and cats and then returning them are heartbreaking when you think about the animals,” said Fasano in his May 2 press release announcing the State Senate’s passing of the legislation.   After researching the problem,  Fasano was struck by the “inhumane” tactics of some leasing companies that work with pet retailers to sell off expensive puppies while they are still marketable.

“In many of these cases, older pets that are returned after a lease often struggle significantly to adjust to having lost their home and owner. If they cannot find new homes, these animals are often euthanized,” Fasano said. “What has been happening in these arrangements is inhumane.”

When asked to comment on the pet leasing issue, many state-based pet store owners and animal-care groups had not heard of the practice. However, The Dog House, a pet-breeding company out of Manchester, said that it has been leasing dogs for about three years.

“We do offer the program here,” said a company representative, Julie Parsons. “It seems to be fairly popular.” Parsons says the company clearly explains the leasing process to customers, and that in her experience, many customers have not filed complaints surrounding unexpected costs of leasing a dog.

“We really emphasize the fact that it’s a lease,” she said. “It has been positive for business to help people that want to build a little bit of credit.”

As for banning the practice, Parsons believes the government should take a laissez-faire approach, with the decision being the consumer’s.

“Nobody is saying okay, you have to do it. As long as they go in knowing the ups and downs, as far as I am concerned, they are intelligent enough to make the decision,” she said.

But while The Dog House may oppose Fasano’s legislation, other Connecticut dog kennels share in the senator’s concerns, likening the morality of leasing a pet to that of leasing human beings.

“Everything about it sounds wrong to me,” said Tim Madsen with the Valley Boarding Kennel in South Windsor. “I would definitely have a problem with the notion that some people have difficulty affording a $1,000 dog….. when the cost of caring for a pet can cost you that and then some easily in a year.”

Though Madsen said he had not heard of the problem and wouldn’t think it would be prevalent in Connecticut, he would certainly support legislation that would ban it if it became common.

“I would just have trouble believing that [pet leasing] would ever have any widespread support,” he said.

Fasano may be the first and only state legislator to channel his dog devotion into a tangible law, but he is not the first in the country to raise concerns about the payment plan. Leasing arrangements have been criticized as deceptive by animal activist groups nationwide.

The ASPCA claims pet salespeople push leasing contracts onto eager customers without fully explaining that the customer  is leasing –not purchasing– the dog.

Some lessees are not made aware by breeders and shop owners that they do not actually own the pet during the time they are paying it off. Rather, the leasing company maintains ownership throughout the one-to-two-year lease period, though the purchaser must pay for maintaining the animal.

The company that pioneered the practice in 2013, Wags Lending, markets the mechanism as “an alternative financing option to help you take home the pet that you love TODAY.”

The company coordinates with retail pet stores nationwide and encourages eager purchasers who cannot afford the animal’s sticker price to obtain the pet through lease, assuming their credit score qualifies them. The pet store owners, who are often under pressure to sell off expensive purebred dogs and cats before they age, are inclined to use the leasing option as a sales tactic, enticing customers to purchase the animal via Wags’ contract by downplaying or outright disguising the conditions of the contract, according to the ASPCA.

The ASPCA says that the leasing terms often go unnoticed within the lengthy contracts until it is too late, and many customers are unaware that, at the end of the leasing period, they incur a residual fee in order to fully purchase the pet — making the animal far more expensive than its sticker price.

“These agreements allow a love-struck patron to walk out of the store with a puppy, but end up costing the unwitting buyer many times the animal’s original price,” the ASPCA said on its website. “Deceptive, predatory financing arrangements benefit only the lending company and the pet store — not the consumer, and certainly not the puppy.”

According to Reno Gazette Journal, Wag’s Lendings’ parent company, Bristlecone Holdings, filed for bankruptcy in March following a Bloomberg analysis that claimed the company was leasing dogs with the equivalent of 30-to-170 percent interest, though the company branded its transactions as leases with fixed prices, rather than loans with interest rates.

Wags Lending is still operating out of Nevada, but a representative claims it does not contract with some states, including Massachusetts and New York — both of which have pushed forward legislation to halt the practice in their respective states.

When asked about the controversy surrounding dog leasing, a representative at Wags Lending said, “We are not going to comment at this time.” 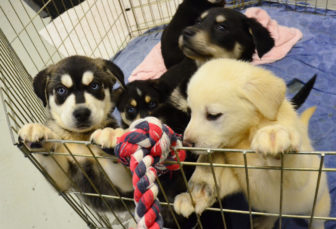 Other dog leasing companies continue to serve some breeding companies and pet stores, one of which is My Pet Funding — an organization that began contracting with The Dog House after the breeder stopped working with Wags Lending a few years ago.

“My Pet Funding seems to be better,” Parsons said. In spite the ASPCA’s and politicians’ claims that the leasing companies can repossess animals should purchasers fail to make payments, Parsons says that most people whose credit scores qualify them to lease dogs want to keep the dog and will make the payment.

Fasano has identified no victims to corroborate his concerns, but the leasing practice has drawn scrutiny from a few states, including California, Nevada, Rhode Island, and New York — each of which have banned or are in the process of banning pet leasing.