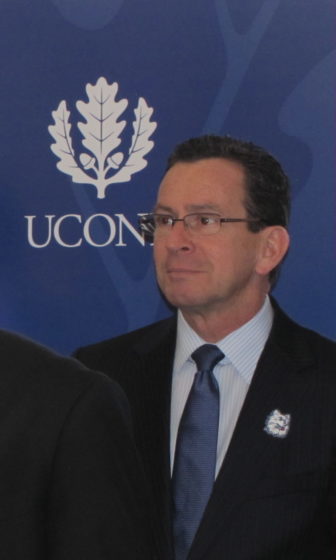 “This sad, politically-motivated decision is yet another attack on civil rights and basic human decency from the Trump administration, and it will have a real impact on the ability of deserving students to access a quality education,” Malloy said. “In Connecticut, we will continue to make every effort at increasing equality and diversity within our institutions of higher learning, regardless of President Trump’s backwards policies.”

The policy shift would undo Obama-era guidance that encouraged considering race as an admissions factor in order to diversify campuses, and restore a George W. Bush-era guidance in which the Department of Education “strongly encourages the use of race-neutral methods for assigning students to elementary and secondary schools,” The New York Times reported Tuesday.

Higher education officials at Connecticut’s universities and colleges either said they hadn’t yet fully reviewed the administration’s policy or couldn’t be reached for comment Tuesday.

A spokeswoman for the University of Connecticut said it was too early to know exactly what impact the policy shift would have.

“UConn is still reviewing the information reported in the news today,” Stephanie Reitz said. “It would be too early to say at this point if, and how, UConn might be affected.”

Maribel La Luz, a spokeswoman for the Connecticut State Colleges and Universities, did not directly address questions about how the policy might impact CSCU. She said in a written statement, “Regardless of what happens in the current administration, our schools will always be open to anyone and everyone who has the will to pursue higher education. Having a diverse population that reflects the world we live in is one of the advantages of being educated at CSCU institutions.”

Malloy echoed this theme in his statement.

“We as a nation should strive to ensure that people of color and other historically under-represented communities have an equitable opportunity to higher education,” Malloy said. “Diversity in our classrooms is not just a feel-good measure – it makes our entire education system stronger.”

Lt. Governor Nancy Wyman responded to the policy announcement by calling for colleges to hold the line on diversity.

“Diversity serves an important purpose in our institutions of higher education – and in our communities, businesses, and across all sectors of our economy,” Wyman said. “Promoting fairness and equity makes us stronger as a community and benefits all our lives.  I urge all of our colleges and universities to maintain integrity to those principles of equality that underpin our society and keep us moving towards a just future.”