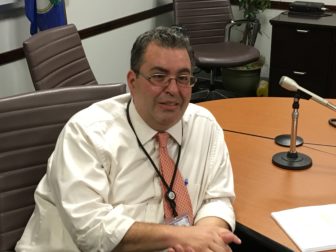 Meanwhile, with the gubernatorial primary less than six weeks away, Obsitnik’s campaign hinted it would consider legal action if the matter is not resolved soon.

The commission launched an investigation on June 27 probing whether Obsitnik’s campaign properly raised contributions or whether it improperly coordinated activities with FixCT, Inc., an independent expenditure committee promoting the GOP candidate. Hanging in the balance is a $1.35 million grant for Obsitnik to help finance his primary campaign.

“We’re not an ATM,” Michael Brandi, the commission’s executive director, said following the meeting. “This is a clean elections program and we have to make sure that all of the contributions have been properly vetted and all of the issues that come up are properly analyzed and investigated prior to the commission giving out any grant.”

Brandi declined to discuss any specifics of the Obsitnik probe, saying commission policy is not to comment on any pending applications.

But he did say that, “Any candidate that’s got a pending application with us (for public financing), those would be investigations that are going to be prioritized. But it’s not to say that we aren’t trying to commit resources to all the cases on our docket.”

The elections enforcement commission has sustained deep budget cuts over the past seven years as the state has grappled with significant budget deficits.

“We’re trying to prioritize as best we can with the very limited staff that we have,” Brandi said.

Still, the investigation indefinitely delays Obsitnik from obtaining public financing for his campaign with the five-way Republican primary set for August 14.

“The wait continues for an SEEC response on what the Obsitnik Campaign is being told are “technical issues” regarding a small number of donor forms,” former state Sen. Dan Debicella of Shelton, Obsitnik’s campaign manager wrote in a statement, adding that the campaign responded to these issues on June 13. “While the Obsitnik campaign will continue to work collaboratively with them, there also comes a point where we may have to consider other options, should we not receive timely feedback on the status of our grant.”

The commission’s next meeting is scheduled for Thursday, July 12.