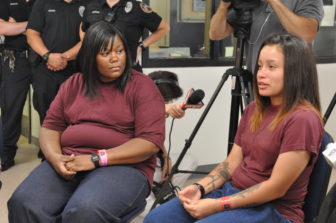 East Lyme – Robin Ledbetter was only 14 when she was sentenced to a 50-year prison term for stabbing a Hartford cabdriver during a robbery. Twenty-two years later, as she serves as a mentor to young female inmates at the York Correctional Institution, Ledbetter finally feels like her life has a purpose.

Ledbetter is one of 19 inmates at Connecticut’s prison for women  living in a new unit focused on rehabilitation. The unit, which opened in May and will eventually house between 50 and 60 inmates, prepares participants for their reintegration into the community.

“It makes me know that there’s something to wake up to, there’s something bigger than myself,” Ledbetter said  “It gives me something to actually feel like my life is not just wasted. Just because I’m an inmate, I’m not just tossed away, I can … hopefully give to these girls the opportunity to learn from my mistakes.”

On Monday, Ledbetter and the other 18 inmates on the unit were joined by Gov. Dannel P. Malloy, Department of Correction Commissioner Scott Semple, and a host of state officials and criminal justice advocates in a dimly lit gymnasium on the grounds of the women’s prison to mark the opening of the W.O.R.T.H. program.

Malloy said the rehabilitative unit would reintroduce hope and provide help to one of the system’s most vulnerable populations through counseling, education, and mentorship. 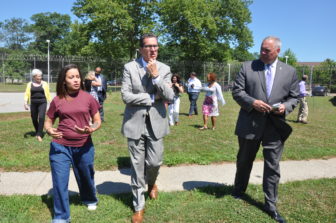 “These women should not be defined by the mistakes of their past, rather they should be recognized for all of their future potential,” Malloy said.

The new program mirrors one that opened last year at the Cheshire Correctional Institution for young males.

Those programs are part of a larger effort by the Malloy administration to try to taper recidivism among different offender subgroups and spur its call for a “Second Chance Society.”

Their approach to tackling recidivism came after Malloy and Semple visited German prisons in the summer of 2015 and saw a facility designed for inmates ages 18 to 25.

The DOC then partnered with the Vera Institute of Justice, a criminal justice reform group in New York City, to design a similar model in Connecticut.

After zigzagging around the cell block for a tour with Ledbetter and Vanessa Alvarado, a 21-year-old mentee in the program, Malloy sat down to speak with some of the inmates in the program during what marked his 25th visit to a state prison.

Inmates described for Malloy the opportunities for growth the unit has provided them, and took turns discussing their hopes for the future.

Alvarado, who is serving a two-year term for first degree burglary, told Malloy that before being in the unit she had to deal with her problems without help or support. The young woman said being in the program has helped her understand why she turned to using drugs and made her want to become an addiction services counselor when she finishes her sentence.

“But coming here I realized there’s a lot of support that I never knew we would get,” Alvarado said. “Instead of running from my problems, I’m kind of forced to face them, which is really scary but it’s definitely changed me in the last month of being here.