Marcia Chambers dies at 78, was founding member of Connecticut Mirror

Editors’s Note: Marcia Chambers was at the table nine years ago at a free-wheeling, brainstorming dinner that led to the creation of CT Mirror. She served as an advocate and as a member of our board from its inception until her death Friday. She will be missed. 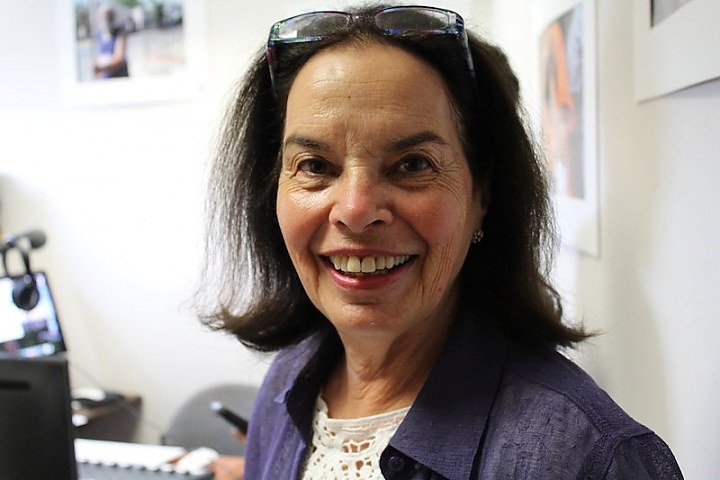 Marcia wrote millions of words over a 49-year career. She published those words online, in print newspapers and magazines, in a book about sex discrimination in American golf.

She published three other words on a pay phone in New York in the early 1970s. Those words summed up the competitive drive that animated her reporting.

At the time, she covered courts for the Associated Press. As Marcia told the story, she would end up covering cases alongside a reporter from the United Press International, a rival wire service. When court finished, they would phone in their stories. Marcia would race out to a pay phone, call in her story, then, before the UPI reporter showed up to do the same, write a note that she left by the phone. It read, “Out of Order.” 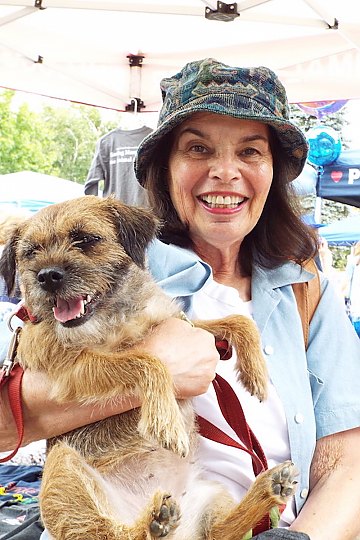 Marcia Goldstein was born in Brooklyn on April 19, 1940. She grew up in Queens and graduated from City College.

At first she taught in the public schools. She wrote articles for an underground newspaper called the East Village Other.

She had reporting jobs in New Mexico, Pennsylvania, New Jersey, before landing the AP job in New York in April 1971. She made a name for herself covering cops and courts, subjects she would return to throughout her career. She covered the murders of mobsters Joe Colombo and Joey Gallo as well as a police corruption probe by the Knapp Commission.

Marcia began using the last name Chambers, although she wouldn’t legally change it until she got married in 1985.

The Times snapped her up in April 1973.  She worked the metropolitan desk for 12 years, covering the trials of Watergate figures John Mitchell and Maurice Stans, “subway killer” Bernhard Goetz, serial killer Son of Sam, and the kidnappers of media heiress Patty Hearst.

She was one of a small number of women in the male-dominated Times newsroom. Another one of those women, Linda Greenhouse, recalled Marcia as a “pioneer.”

“Marcia was a reporter’s reporter. I say reporter and not the more high-flown journalist because what Marcia did, what she loved, and what she excelled at was the hard and not always glamorous work of reporting,” Greenhouse, a Hamden native who went on to cover the U.S. Supreme Court for the Times and now lives in New Haven, wrote in an email message Sunday.

Marcia picked up awards along the way, including one for best investigative story in 1977 from the Newswomen’s Club of New York (about consumer affairs radio spots based on false cases). Her Times story “Life and Death of a Campus Drug Dealer” was nominated for a Pulitzer Prize in 1983. Read that story here.

She began a collegiate teaching career back in 1976, when she spent a decade as an adjunct professor at Columbia School of Journalism; the entire entering class each year began with a lecture by Marcia on law and the press. When theTimes moved her to LA, she taught at the University of Southern California.

Charles Kaiser, another Times reporter, met Marcia on a roof at Columbia University during a student riot. He called her “the finest criminal justice reporter I have ever known.”

“Her standards and her instincts were the very best in the business,” Kaiser recalled. “She was part of that early generation of great women reporters who grew up on Brenda Starr and knew that was who they wanted to be when they grew up.

“If you told her the facts of a criminal justice story you were working on, she had an extraordinary ability to tell you where the story would go next.  She taught me more about how to be a journalist than anyone else.”

Decades later, after they moved on to other publications, the two remained in touch and collaborated, including on this story last December when Marcia read through former National Security Adviser Michael Flynn plea agreement in the Russia probe and realized he probably had been wearing a wire for the government.

Marcia always read the fine print. She had a hunch. And she followed it. 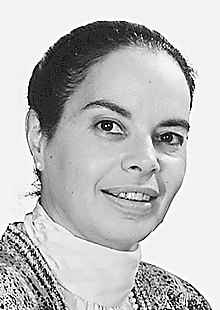 After her two years on the national desk, Marcia surprised colleagues by leaving the Times to pursue her interest in the law more fully. She wrote columns for the National Law Journal. She got a fellowship to study at Yale Law School, where she earned a master’s degree. She fell in love at Yale, as well, with a professor named Stan Wheeler, whom she married in 1985.

She remained at Yale as a journalism fellow, writing for regional and national publications and advising other journalists studying at the law school. When Stan became master of Yale’s Morse College, Marcia became a mentor to many undergraduates and taught a course on journalism. Then they settled in Branford.

She developed an interest in golf, and in clubs that barred women from playing. Simon & Schuster published her book The Unplayable Lie: The Untold Story of Women and Discrimination in American Golf in 1995; she went on to continue following the subject for publications like Golf Digest and won numerous awards in the process.

Meanwhile, the reporting field Marcia loved was changing fast thanks to the internet. She decided to change with it. 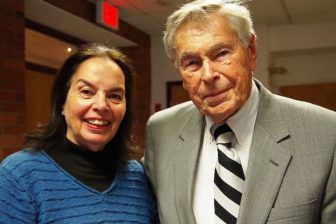 In 2006, as many of her peers were leaving the field or holding on to posts at shrinking print papers, Marcia decided to take the plunge into the then nascent world of online local reporting.

That April she started writing a column called The Branford Eagle in this publication, the New Haven Independent, the second nonprofit public-interest local news organization in the country. She soon got money to hire freelancers to cover government and breaking news, and the Eagle became a standalone sister site to the Independent as part of the nonprofit umbrella organization the Online Journalism Project. At regular coffeeshop staff meetings, she played a leading role in the organization’s growth and direction.

As in her past postings, Marcia combined an intellectual approach to the law with old-fashioned shoe-leather scoop-itis.

She dived deep into zoning controversies and court cases that fascinated her to produce pieces like this one about the legal implications of the system’s handling of an accused murderer who sought to represent himself.

Meanwhile, at one staff meeting in the old Bru Cafe in downtown New Haven, Marcia heard discussion about how a reporter had learned the identity of a laboratory worker whom the police expected to arrest for the murder of a Yale graduate student. The man was from Branford.

She contacted a source, who revealed that the Branford police had under seal a report about a forced-sex accusation against the man from several years earlier. Marcia managed to obtain a copy of the report. Theresulting scoop brought reporters from The New York Times and the Today show to the Independent’s door, and provided the fodder for a two-page-spread and cover story in the tabloid New York Post.

When the reclusive owner of some of Branford’s Thimble Islands was getting married, the wedding was declared off-limits to the press. Marcia found out when and where it would take place. She convinced a retired journalist friend with a boat to ferry an Eagle photographer to the island. They arrived just as the wedding procession approached the shore. The photographer got some photos in before men rushed at the boat screaming. Marcia’s friend whipped the boat around and sped toward shore.

The Eagle had another scoop. When the New York Daily News purchased the photos, Marcia used the money to buy the photographer a new camera.

Former First Selectman Anthony “Unk” DaRos called Marcia “the true voice of Branford. She went out of her way to find the truth. And she would only print the truth. She would do research on all the issues out there. It wasn’t hearsay. She would dig it out.” 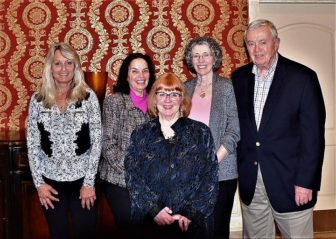 Marcia was proud of the team she assembled at the Eagle — including Diana Stricker, Sally E. Bahner, Mary Johnson, and Bill O’Brien. They got used to carrying home arms full of awards at the annual the Connecticut Society of Professional Journalists dinner.

But more than the awards, the daily deadlines kept Marcia excited, especially after Stan’s death in 2007. (She also organized an annual jazz concert in memory of Stan, a trumpeter, at Yale Law School; the concert inevitably featured a rendition of Stan’s composition “Marcia.”) A “vacation” for Marcia meant posting Eagle stories about Branford from Vermont.

Even cancer couldn’t hold her back. In her last days at Smilow she was still making sure that stories got posted. Until this past Friday night, when she met her last earthly deadline.

Marcia is survived by a sister, Janice Kabel; stepsons Warren and Steven Wheeler; nephew Reuben Kabel; and a beloved cousin, Myra Braverman. She was predeceased by her husband Stan Wheeler and stepson Kenneth Wheeler. No plans have been finalized yet for her interment or a memorial service.

Meanwhile, in the realm of the hereafter, it wouldn’t be a surprise to learn that the angels are right now reading an investigative article entitled, “You Call This Heaven?” and wondering why one of the celestial pay phones suddenly bears a sign reading “Out of Order.”